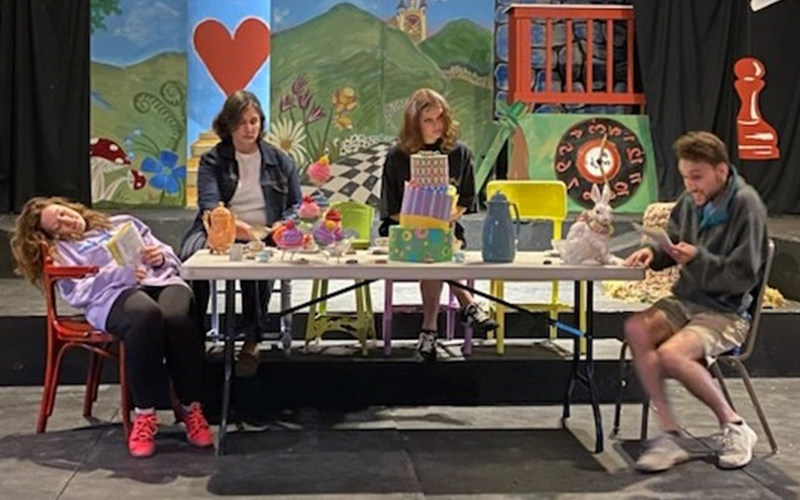 After being derailed for over a year by the pandemic, the Valley Players Theater in Waitsfield is ready to pick up where they left off with the upcoming premiere of “Alice’s Adventures in Wonderland.”

Originally slated for April 2, 2020, the cast had already been in rehearsal for six weeks when COVID-19 forced them to shut down. It was to be the fifth of six shows as part of the theater’s 40th anniversary season, where they brought back past favorites such as “Harvey,” “On Golden Pond,” “Oliver,” and “Out of Sight, Out of Murder.”

Since then, the set – designed and painted by Sparky and Peggy Potter – has remained unchanged, waiting for audiences to fill the seats once more. With restrictions now lifted, that time has finally come. The cast and crew have been in rehearsal since May 23, awaiting the show’s opening on July 9.

Despite the setback, the theater’s publicity manager, Ruth Ann Pattee, said getting everything back together was nearly seamless. She described it as a “turn-key” production, with only minor cast adjustments from a year ago.

While the theater produced a number of Zoom shows this past winter, she noted everyone was eager to get back on stage. According to her, a live audience was the number one thing the cast and crew were looking forward to.

Pattee also shed light on some health precautions the Valley Players Theater would continue to take, despite Vermont’s recent removal of pandemic-related restrictions. She noted seating would be kept in small groups and social distancing would remain an option for those who desired it. She also encouraged those unvaccinated to continue wearing masks.

“We’re trying to be sensitive to people who might not feel comfortable unmasking and let people adhere to their own comfort level,” said Pattee.

She also emphasized the wide appeal of the upcoming show and encouraged families to attend. The show itself will be about 70 minutes long and is intended for all ages.

“We encourage everyone to come out and get back into live theater and reacting and laughing together,” said Pattee.

Tickets for the show can be purchased online via the Valley Players’ website (www.valleyplayers.com).