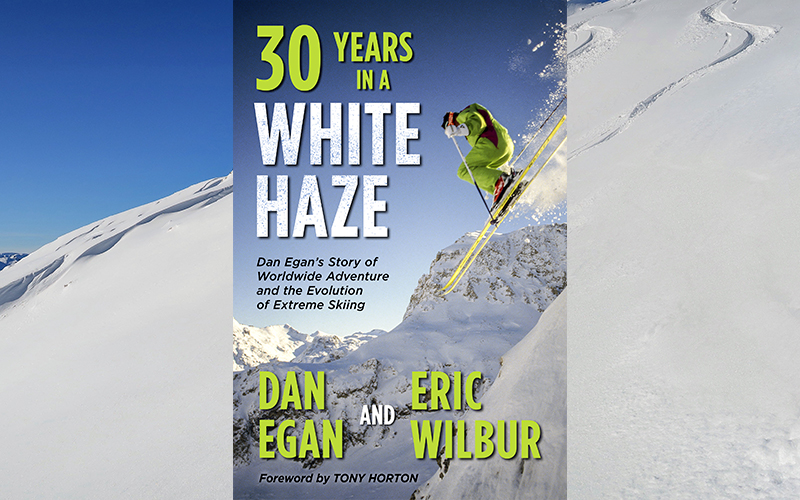 In the late 1980s and 1990s, the Egan brothers were ski-world heroes to countless skiers, myself included. I witnessed the Extreme Team at the summit of Mount Ellen on more than one occasion. They would launch into FIS and make magical turns through the bump field below. These were not namby-pamby Western powder skiing conditions; anyone can blow through bottomless powder. These were hard, icy bumps, but the Egan brothers were somehow unaffected by the conditions. These guys made steep ice bumps look like powder skiing. Mortal skiers, like myself, would shake our heads in wonder at what these guys could possibly be doing differently.

Dan Egan explores three decades of high angle skiing adventures in his book, which he co-wrote with Eric Wilbur, “30 Years in a White Haze.” Dan and his brother John were among an elite crew of extreme skiers who arced the world of skiing towards the extreme edge -- and then launched right over it.

The Egan Brothers, members of the Skiing Hall of Fame, set a new standard for the highly revered art of ski bumming and created their own job categories. It takes a genuine expert to go heli-skiing on no money, to live and sleep in absconded vans or to cross the globe in order to make turns in the most exotic lands. Between them, they have 50 first descents on some of the most remote mountains of the globe. They traded up from patches of duct tape to sponsors’ logos on their jackets, but they were still the Boston bahd ahses who ripped harder than anyone.

It would be one thing if all they did was hitchhike to Squaw Valley and jump off cliffs. No, they had to go heli-skiing on the Kamchatka Peninsula. Check that one off the list. Launching off the Berlin Wall in Germany? Check. Get married to Eastern block ski racers? Checkmate. The challenges of being a Sugarbush ski bum seem mundane in comparison. You need a season pass, a reliable car with snow tires, a job washing dishes or tuning skis and as many ski days as possible. These guys were reaching for a whole ‘nother level of ski bumming.

John eventually became the ambassador and VP of Recreation at Sugarbush, garnering immense levels of attention, particularly in the Boston area where the Egans are the Bean-town heroes of skiing. Dan succeeded in organizing Extreme Team skiing clinics, created numerous films and remade a New Hampshire area.

Dan’s book reveals many of the difficulties of living a ski bum life. There is little of the safe and secure. Adrenaline and adventure are available in both quantity and quality. The other stuff, a nice car, a steady relationship, all the trappings of a secure, sedate life somehow remain just out of reach.

This book is the soul of a skier laid bare. This is fearless writing. People are dressed down, mistakes are confessed, anyone who bailed on a deal or forget their secura-fixes on an expedition is taken to task. Not ignoring his own failings, Dan’s personal struggles with partying are openly revealed. This surprised me because he always struck me as a hard-core athlete who was always training, if not on skis, then on a bike or a soccer field. Every fall, once the lifts were turning, he would show up – with tree trunks for legs and a readiness to rip.

Psychologically, this book is an interesting case study of siblings in extreme situations. Who knows how much of a factor was sibling rivalry that drove these two brothers to such heights? There is a perception that extreme skiers are fearless. It might not be that simple. Dan holds nothing back. He shares raw emotions and confessions of events where things went wrong. The writing here is as daring and edgy as the adventures that they pursued.

The book left me with a feeling of enthusiasm for adventure and a desire to go a step higher, always. That seems to be within the mantra that Dan used to achieve so much as a skier. He was devoted to his inner voice, his family and close friends. He succeeded in warping the ski bum life to unimaginable heights by building relationships that rewarded both Dan and whomever he met.

Imagine an audience watching an Extreme Skiing movie where our heroes are jumping out of perfectly functioning tram cars and skiing hairball steeps with effortless grace. Most of the audience is asking “why.” “Why do these things?” A few are asking, “how,” “How do we do these things?” Dan has redefined where the edge actually is. He is uniquely qualified as he addresses both questions, why and how, in this highly-revealing look at the peak experience.

Brennan is The Valley Reporter’s alpine ski writer, authoring Along The Fall Line during ski season.