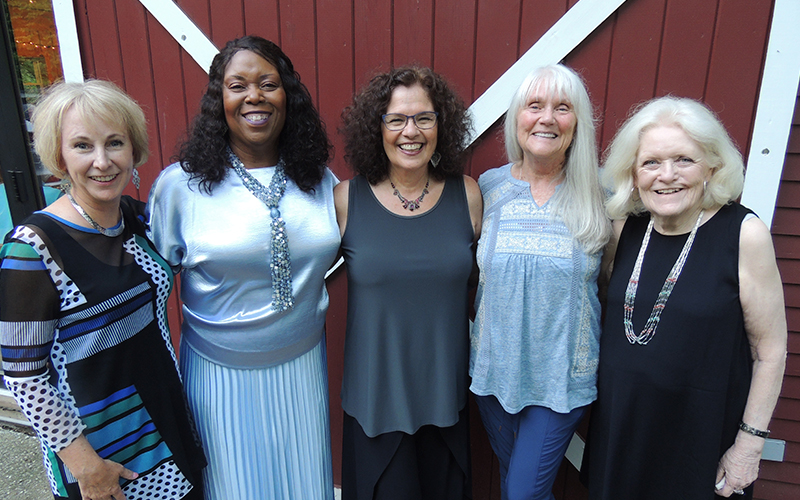 Five authors, a professional literary agent, a publicist and a publisher gathered at the Handsome Red Barn at West Hill House Bed and Breakfast last week along with dozens of community members to determine who would be the winner of When Words Count’s Pitch Week 21.

When Words Count (WWC) is a writer’s retreat, formerly based in Rochester. WWC holds regular writing workshops throughout the year and from its participants selects a dozen or more superstars to participate in one of four Pitch Week events.

For Pitch Week, the selected authors spend a week working with company founder Steve Eisner and the in-house literary professionals before gathering to pitch themselves and their books to those assembled for the Saturday luncheon event. Last weekend’s event took place on June 26.

The first author to present was Ani Tuzman who pitched her memoire “Angels on the Clotheslines.” She said her book “carries the flame that the Holocaust did not put out,” and in her reading she talked about how as a young child she encountered Hebrew words on a newspaper in her parents’ kitchen in the United States and how she puzzled over what all these symbols might mean. The letters she said were like little soldiers crowding together and ultimately coming together to mean words.

Stacey Wilder took the podium next to present her crime novel “Charleston Conundrum.” She set the stage for her reading with a flashing police light. Her novel opens with her being awakened in the night by the flashing light, after being unable to reach her best friend and next-door neighbor that day. She heads out to see what the ruckus is about only to learn that her best friend has been murdered.

“Puddin’,” written by Ce O’Flaherty was pitched next. O’Flaherty read an excerpt from her book with precise diction and animated delivery. The tale she told, of a young girl exposed to two different homes in winter and in summer with vividly different levels of safety (think abuse) was riveting as it was, but the details about her character’s mother having a glass eye and the protagonist snatching it to run with it to church was hilarious. She recounted trying to return the glass eye to her mother’s bedside without awakening her and hoping the pieces of toilet paper (which she’d used to grab the eye) would stick to it – earning solid laughter from the crowd.

The final author, and the winner of Pitch Week 21, Eileen Donovan pitched her novel, “A Lady Newspaperman’s Dilemma,” a tale set in 1926 when her protagonist, Alex starts a journalism career as a cub reporter for a small Montana newspaper. Alex’s editor is distressed to find out that Alex is a woman and worries that her primary interest is to find a husband. What Alex finds instead is a shootout at the courthouse next door and she sets out to investigate what happens as the shooting continues.

Those in attendance were asked to select which two books they’d like to read first and vote for the Peoples’ Choice component of the competition. That vote factored into the decision of the judges who included literary agent Ken Sherman, publicist Lori Hettler and publisher Dave Legere. Joining Eisner as co-host for the event was Elizabeth Splaine, a 2019 Pitch Week winner. After the elevator pitches, the judges met to award Donovan first place and the chance to have her book published.

When Words Count offers writers’ retreats all year round, and each year between Thanksgiving and New Year’s, they run a national sweepstakes in every state and Canada offering a five-day stay at the retreat. They receive some 2,500 entries from writers who are eager to publish traditionally, Eisner said.

They select 300 at random and those writers come to WWC over the course of the year for five days of working on their books. Eisner and his team invite about 10-15% of the 300 who come to compete in one of the season’s Pitch Week events.

In the traditional publishing world, Eisner explained, the path to publication for first-time authors is very narrow with 99.5% of authors receiving rejections when they send their manuscripts and only 0.5% getting their books read by an agent.

During three Pitch Weeks each summer, the All-Stars present and one is awarded a publishing contract. While there’s one winner per Pitch Week, Eisner and crew go deeper into the bench of All-Stars and offer the second-place winner a chance to publish by covering 50% of the hard costs and a royalty split.

Eisner said that the percentage of his Pitch Week participants who end up with a publishing contract is 56% – compared to the 99.5% of people who go the traditional route.