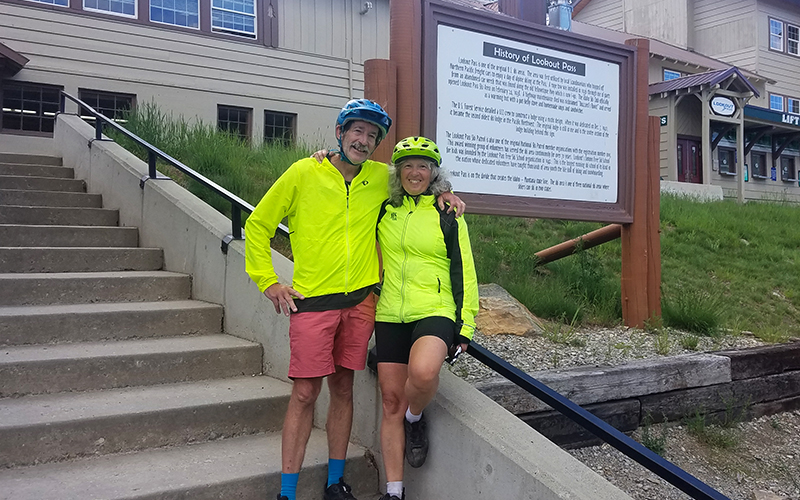 Editor’s note: This is the weekly report from Shevonne and Pat Travers, Waitsfield, who are biking Seattle to Washington, DC, on the Great American Rail Trail.

After a warm night at Heyburn State Park, we were back on the Trail of the Coeur d’Alene’s in the morning. This trail gets our blue ribbon of excellence because of its beauty, its pavement and because it winds across and next to multiple waterways. It crosses most of Idaho’s Panhandle, travels through the Coeur d’ Alene Indian Reservation and the Silver Valley and crosses a 3,100-foot bridge trestle on the Coeur d’Alene Lake that is also specifically designed for individuals in wheelchairs. Pat, the engineer, fell in love with the bridge’s design and indicated that he wished he could have had a part in its construction.

We learned that this 72-mile trail is paved because it is a superfund site. The asphalt on the trail serves as a barrier to the contaminants caused by mine waste rock and tailings (from early mining activity) containing heavy metals.

Eight miles up the trail, we stopped in Harrison and chatted with two ladies sitting outside the town’s library selling crafts and huckleberry products. By a bit later that afternoon, we reached the By the Way campground, small yet equipped with hot showers and a fabulous gazebo.

That evening, we walked down Pinehurst’s thoroughfare in search of dinner. Prospector’s Pizzeria drew us in and sure enough, it wasn’t long before Prospector Bob, dressed in his plaid flannel shirt, red suspenders, jeans and a prospector’s hat appeared. Prospector Bob, (aged 75) entertained us while we ate, sharing stories about how as a teenager he was friends with all the miners and then after a stint in the service, he became an IBM software developer for several years. He and his family opened the restaurant and indoor mini-golf room last fall because they saw a need for more recreational activities for children.

On Sunday, we continued on the paved trail, cycling through Kellogg, where we noticed a gondola shuttling mountain bikers and tourists up to the top of the local mountain. And from there, we cycled up to Wallace, a town designated as an historic district, which kept it intact when the interstate was built.

After tooling around the town and having lunch, we cycled up through the headwinds to Mullan (the home of the Lucky Friday silver mine,) and the last stop on the paved trail.

AND THEN THERE WAS MONTANA

There we were in Mullan, ID, on Sunday, going in multiple directions to locate the Northern Pacific (Nor Pac) Railroad Trail. No signage in any direction though a helpful Sinclair gas station employee did provide some guidance. And after coming across two other cyclists also trying to locate the trail, we all finally found it. The goal now was to climb up to Lookout Pass, some 12 miles upward to an elevation of 4,710 feet. Once at the pass, the trail promised 14 miles of downhill coasting to Saltese, Montana.

The climb upward seemed fairly easy given that it was a railroad grade. However, it was at the top of the pass that we faced a quandary. We were informed that the U.S. Forest Service had just closed the Borax Tunnel, a necessary part of the way down, 24 hours earlier, because the tunnel is in imminent danger of collapse.

Our only route down, according to a Lookout Pass ski area employee was to ride down I-90 with those thundering fast tractor trailers. I absolutely refused to do so, leaving us with trying to find another way to Saltese. Should we ignore the tunnel closure and gamble our way through in the dark? Or should we, according to another employee, attempt to find the correct ATV trail shortcut (there were so many) that would guide us around the tunnel safely?

As we slowly cycled down over the rock-strewn trail, a family of ATV riders, appeared at just the right moment from the opposite direction.  We stopped them and asked them about the tunnel. They had driven the tunnel detour and they indicated their tire tracks were still easily visible. “Follow them, we spun our wheels” they said and “you will be fine.” By 8 p.m. that evening we were finally in Saltese, a tiny community, too exhausted to have more than a cherry soda with some Washington State cherries. We stayed in a motel attached to a real general store.

Monday morning, full of newfound energy, we were back on the Milwaukee Road trail (the one that we had crossed Washington on). This Montana section is named the Trail of the Olympian and it was only 200 feet, via a connector, from yesterday’s Nor Pac Trail. In Haugan, literally in the middle of nowhere, we stumbled upon M’s Drive-Up Espresso and Smoothie Stand. Hmmm, who would have thought?

Five hours and 23 miles later (the trail was rich with rocks and gravel). We arrived in St. Regis. After climbing out of St. Regis on a back road, we were treated to wonderful views of ranches and surrounding mountains. We cycled through a section of a national forest and tired, decided to stop in Superior for the night.

Tuesday was our day to make lots of miles (62) to Missoula and there were no off-road trails. Up early, we made great time, 15 miles on Old Route 10, until we suddenly came to an unanticipated dead end. Though Google Maps indicated that the road we needed was right there on the dirt-strewn path, instead there was a large yellow sign which read “No Outlet.” The only way to Missoula from here was multiple miles on the interstate. Would we now have to walk or ride on I-90 for 40 miles on a very hot day? As we prepared to walk up the ramp entrance, we stopped for a moment to determine the distance to the nearest exit. And that’s when another trail angel, named Cindy, appeared before our eyes. Cindy, who is about the same age as we are, was driving a pickup truck and going to Missoula for a massage. Yes, she would happily give us a ride.

Cindy told us she was raised in western Washington on a Holstein farm, with four other sisters. She and her family have lived in western and eastern Montana and sold a property that subsequently burned to the ground. Cindy is full of love, positivity and curiosity. On the outskirts of Missoula, we said our goodbyes and shortly thereafter, Pat discovered he had left his cycling helmet in the truck. Whoops – time for a new helmet. Then we found the Milwaukee Road Rail Trail once again, stopped at the Spotted Dog bicycle shop and then crossed the river into downtown Missoula where we popped in to visit the headquarters of the Adventure Cycling Association (ACA).

A gentleman opened up the door and said “Welcome.” “You can park your bicycles here and then come on in for free drinks and ice cream.” We filled out a small card with our information and they took a Polaroid photo of us, posting it with the other cyclists who have passed through in 2021. We spent several minutes describing some of the trickiest parts of the Great American Rail Trail (GART) thus far while we sipped our Coke’s and ACA’s Jeff said, “We had a couple here yesterday who essentially shared similar information.”

Now staying for a few days in Missoula, we have cycled the rest of the Milwaukee Path, the Kim Williams Trail and the Canyon River Trail. These trails run alongside the Clark Fork River (a branch of the Columbia River) and become gravel-like and head to a golf course and resort community. This is the end for now of what is open of the GART in Montana.