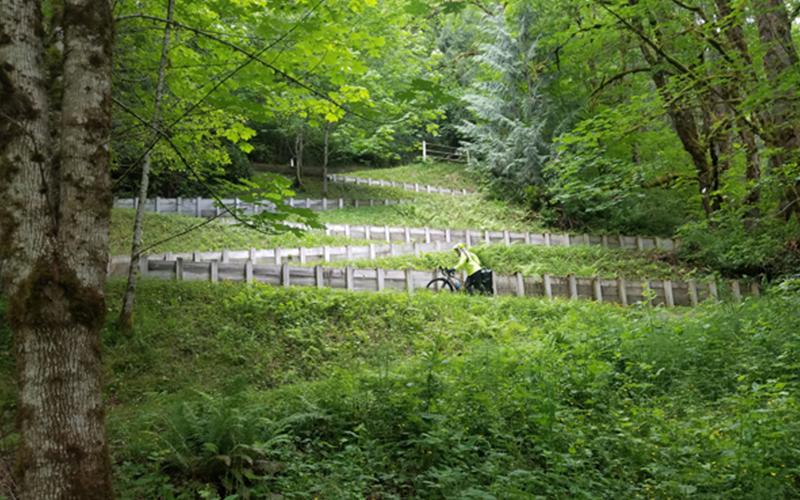 Editor’s note: This is the second report from Shevonne and Pat Travers, Waitsfield, who are biking Seattle to Washington, DC, on the Great American Rail Trail.

Today was the day our “rubber hit the road.” On a bright and sunny morning, with the temperature at about 50 degrees, we set off at 8:10 a.m. from the corner of Alaskan Way and Marion Street on the Seattle waterfront, the start of our long adventure. How appropriate, with my decades of experience in construction project management, that the whole area around the start of the trail is under construction! Better yet, it was a construction worker in a hardhat who agreed to shoot our “sendoff” photo. Most of you know that Shevonne fell for me because I wore a hardhat when she met me.

The 44-mile trip to Issaquah was awesome! We rode along Seattle’s waterfront on Puget Sound, which was loaded with container ships headed into this country’s fourth busiest seaport. We went through the Port of Seattle, the huge BNSF rail yards, rode over a historic bridge and through the University of Washington. We also rode along two large and beautiful lakes and followed the Sammamish River for several miles. The entire ride today was along rail trails or designated bike lanes. Seattle and neighboring King County have built cycling trails throughout the area; they crisscross everywhere. And they are heavily used!

The stuffed bike bags continue to generate friendly conversations. When fellow cyclists ask us where we are going, their jaws drop when we answer. We also got a great tip from a cyclist who directed us to a fine Indian restaurant. Other highlights of the day included saying “Congratulations!” to a young lady in her graduation cap and gown getting her photos taken next to the river, learning some of the history around Lake Sammamish, watching some women practice sculling along the Seattle Ship Canal and discovering that there’s a large effort to restore salmon in the local lakes and rivers.

After two nights in the Hyatt Hotel in Seattle, we are spending the night in a Motel 6 in Issaquah. Within minutes of our arrival, the Issaquah Police were scoping the joint and laying down the law with the motel’s manager. Curious, Shevonne asked one of the police officers if we were going to be safe. He reminded us that we were staying in a Motel 6 and stupid things happen here. Well, at least they left the lights on for us!

A WALK IN THE PARK – MOST CERTAINLY NOT

Shevonne writes: The scenery is spectacular but the past three days have been far from a walk in the park. Yes, we have been on several rail beds and that means the grade of the trail cannot be more than 2%. However, sometimes the rail beds disappear because of burned-out trestles or because private entities have absconded with sections of the trail. We have had to push our heavily laden bicycles up zigzagging sections and carry them up metal stairs. And then there are the pitch-black tunnels designed and constructed for Rockefeller’s Milwaukee Road line to get through the Cascade Mountains. The tunnels are open for cycling but one must have a good light and plenty of confidence to maneuver through the bumpy surfaces. Pat takes them on with a frenzy while I push my bicycle.

The first tunnel we encountered was 2 miles in length. Upon exiting we were greeted to plenty of rain that just kept on coming for the next three hours. Thankfully, our gear (yellow rain jackets, rain pants, helmet covers, gloves and hand warmers) did the trick.

Drenched as we were, it was also our first night to set up camp. Miraculously as we arrived at Lake Easton’s State Park, which is squeezed between an active rail line and Interstate 90, the rain subsidized. We set up our tent, inflated our sleeping pads and zipped our lightweight sleeping bags together. Our spirits buoyed, we found a lively café a mile’s walk away and were invited to join a fellow camper’s campfire as night fell. Unfortunately, the temperatures dropped to 42 degrees leaving us shivering in those bags. Now we know it’s cold in the Cascades in mid-June.

Saturday’s ride on the Palouse to Cascade Trail (from the state park) was full of gravel. It was extremely challenging for me to stay upright and not get caught in all of the ruts. The high point of the day was stopping at the former Cle Elum depot, which was once one of the three crew change-over locations for the Milwaukee Road rail line. There we found several historical markers, describing the depot and Smokey’s barbeque, a diamond in the rough.

Since our Seattle departure, we have cycled 154 miles – not too shabby for we slowpokes. Once surrounded by lush forests, we are now cycling through rich green irrigated farmland, lots of wind and very few trees. The rest of the Palouse to Cascade trail promises more of the same climate, nasty goat heads which love to play havoc with tires and knowing the right password to get through the Army’s proving ground. Pat is most definitely the stronger cyclist regardless of the weight he carries. We are dining on plenty of granola and Greek yogurt in the mornings, cheese or peanut butter sandwiches and fruit for lunch and every now and again, we locate a restaurant serving dinner. Finding coffee is now more of a fantasy than a reality.