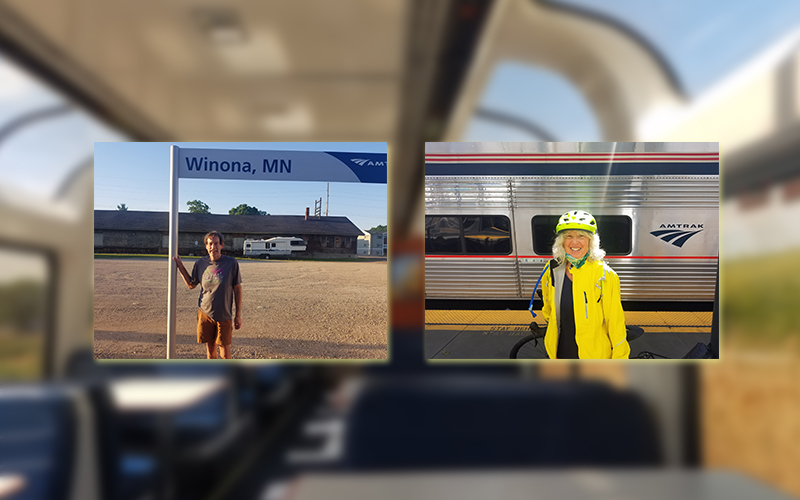 Editor’s Note: This is the first report from Shevonne Travers who, with her husband Pat Travers, has just begun a cross-country bike ride from Seattle to Washington, DC, on the Great American Rail Trail.

Not quite, although after three days of living and sleeping (first in coach and then in bunk beds) on two Amtrak trains we are ready for our last bit of luxury before we begin cycling east. The past few days were full of pleasure and the unexpected. We chatted with other travelers, were exposed to exquisite scenery, provided care to a needy passenger and fell in line with the regimented Amtrak rules. We had our share of microwaved TV dinners (because of the pandemic they have not been preparing fresh meals ), coped with no running water in the bathrooms for several hours and maintained our composure when we discovered we had purchased train tickets to Chicago on the Cardinal through Virginia, West Virginia and then back up through Kentucky, Ohio and Indianapolis (a 24-hour trip) rather than the much quicker route through Maryland and Pennsylvania.

We quickly learned about shift changes, smoke breaks, how to take a shower in a moving train and when a conductor threatens to throw someone off the train, they mean business. In Charleston, WV, a man sitting directly across from us was handcuffed and removed from the train by three local police officers when he refused to stop badgering the conductor and continued to escalate. Unfortunately, he left his partner to fend for herself. She was terrified without him, had no money and held on tight to a teddy bear from Shoney’s. We soon recognized she had some issues and everyone in the train car stepped up to help her get through the next several hours.

Once on the Empire Builder in Chicago, we secured a roomette, all of 4 feet by 7 feet. Cramped but doable as long as our panniers stayed in a luggage area, this train offered us private sleeping quarters and an observation car equipped with swivel chairs, glass ceilings and windows. People played cards, drank soda and beer and kept their eyes on the ever-changing scenery. Pat and I were introduced to much of North Dakota’s landscape, the Rocky Mountains throughout Glacier National Park and the raging rapids in the state of Washington.

It’s a chilly day here in Seattle but the sun is shining and we are taking some time to recharge and repack. We plan on leaving Wednesday morning on the Great American Rail Trail. All aboard.