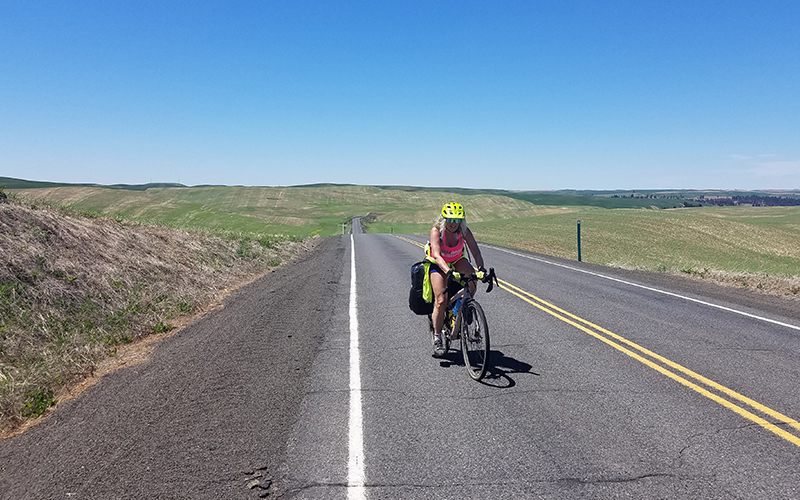 Editor’s note: This is the third report from Shevonne and Pat Travers, Waitsfield, who are biking Seattle to Washington, DC, on the Great American Rail Trail.

Pat writes: The fifth day of our adventure was, by far, the hardest yet. After 11 miles of fairly easy travel heading east out of Ellensburg, WA, we entered the U.S. Army’s Yakima Training Grounds. Suddenly the trail surface turned into pure sand, making cycling with our tires impossible. During the peak of the 90-degree afternoon heat, Shevonne and I had to dismount and push our bicycles on foot, uphill. This went on for 4 difficult miles until we reached the Boylston Tunnel.

Technically, cyclists are supposed to walk up and over the tunnel, on a side trail, because the tunnel is in a slow state of decay, with rocks occasionally falling off the ceiling. As it was about 50 degrees inside, we decided to chance it, given our sturdy bicycle helmets. We pushed through all the tumbleweed inside the tunnel, carried our bicycles over the heavy rock falls in the center of the tunnel and emerged on the other side to find a jumbled mess of sage brush and a bog to navigate!

At last, we thought as we looked at the topography, we were going to be able to revel in the gradual downhill trek for better than 10 miles, on a somewhat ridable surface, (though there were ruts and plenty of rocks to maneuver around and I fell four times). Then, suddenly a vicious windstorm kicked in with gusts over 50 mph. For the last couple of miles, we once again had to walk our bikes and hold on to them for dear life as the winds threatened to throw us or our cycles over the steep hillsides.

After arriving at the trailhead by the Columbia River, we were wasted. We had been the only folks on that trail for several hours. And although we didn’t say anything to each other, we each assumed we would not make it another 3 miles to our reserved campsite and would have to endure a night of sitting up in the wind because putting a tent up would have meant sheer destruction of our tent.

There are times in life, however, where something occurs that “was meant to be.” When we arrived at the last trailhead, a gentleman was parked in his camper. He originally had plans to spend the night there, but due to the fierce winds, he was about to drive elsewhere. Extremely exhausted with several small cuts and bruises, I brazenly asked him if he wouldn’t mind taking two wiped-out cyclists to Wanapum State Park. He said “Sure.” So, Shevonne and I hopped into his camper, (after loading all the panniers and the bicycles into the back of his camper) and he drove us to the state park.  Once at the park, our new best friend, Bob, spent the night in his camper while we determinedly got our tent up in the whipping wind. He cooked up a lovely dinner for us complete with appetizers and drinks. As we chatted, we learned Bob, (aka our Trail Angel) is an avid cyclist and is an advocate for bicycle trails in the state of Washington. The perfect person for us to run into! He also provided us with some very useful advice about the not-so-good conditions of the Palouse to Cascades Trail in eastern Washington meaning today that while chilling out, we are figuring out a new route to Idaho.

Bob invited us back into his camper earlier today for breakfast and offered us a ride to Moses Lake. Given the prior day’s horrendous 35 miles, we eagerly agreed. Otherwise we would have been riding on Interstate 90 all day in the blazing sun. It was during that conversation we learned a new acronym from Bob. “So, you aren’t one of those EFI trail riders then?” said Bob. “What does that stand for?”, I asked. “Making sure to ride Every F’ing Inch of the trail,” he replied. We laughed. I think we met our match on yesterday’s trail, making us much more willing to leave EFI behind! We may see Bob once again in Cataldo, ID, where he will be cycling for the next few days. Did I mention that Bob is 77 years old and has cycled many miles around the U.S. and on other continents? He’s one amazing individual and we are extremely glad to welcome him into our lives.

Shevonne takes the keyboard as the Travers leave Eastern Washington for Idaho:

After surviving the ride through the Yakima Proving Grounds and the subsequent windstorm, we discovered that the rest of the Palouse to Cascades rail trail is not ready for prime time. The railroad ballast still lines the trail, meaning we would have to push our bicycles for a few hundred miles through the rest of Washington. It was, we decided time for a detour.

Thus, over the past week, we have traveled through Moses Lake, Ritzville, Sprague and Rosalia and earlier Friday evening crossed into Idaho. We have made use of frontage and dirt roads through desolate, dry country. We have seen how the construction of new roads and recurrent flooding have destroyed once vibrant communities. We have learned much about freight trains, what they carry and where they travel. We have stayed in inexpensive motels, camped in the Rosalia town park and in the Heyburn State Park, the oldest state park in the Northwest. We have chatted with motel owners and guests, folks hanging out in their lounge chairs and several individuals in cafes and restaurants. We have witnessed several acts of kindness among community members and have also been the recipient of their generosity.

We have been introduced to summer and winter wheat, fields of hard-shelled peas, lentils and barley. We have gained leg strength as we climb in elevation. We have learned that Ritzville is famous for their wheat (once claiming be the wheat capital of the world) and because it was where the majority of the volcanic ash from the 1980 Mt. St. Helens eruption landed, forcing road closures for several days. Similar to what occurred in Gander, NF, after the 9-11 attacks, Ritzville hosted several out-of-town visitors until the ash could be cleared.

Last Thursday on our way from Sprague to Rosalia, after several gorgeous but challenging climbs, we came upon the town of Malden, much of which was destroyed in a wildfire last Labor Day. It was eerily quiet, not much rebuilding was taking place and the remnants of homes and vehicles were still visible. As I cycled through, I saw an older gentleman digging through his home’s charred remains. A short time later I had the pleasure of meeting him as we were in the same restaurant in Rosalia. He shared that he was ecstatic when he found pieces of their nativity set in the rubble.

A little later in the new coffee shop in Rosalia, we met Bill O’Keefe, who was teasing us about our ride and offering to take us either to Plummer, Idaho, or Spokane, WA, to get wider tires. Though we laughed at the time and said “No”, as the day progressed and we stared at the hills we would need to climb out of Rosalia, we decided we should really reach out to Bill. Trouble was we didn’t have his contact information. In a small town, however, it didn’t take long to find him.

By Thursday evening, we had his contact information and sure enough he and his partner, Tonya, agreed to take us the 29 miles to Plummer on Friday afternoon. That meant Pat and I had several hours to talk with local townspeople. For three hours, we held court in the Red Brick Café. An older gentleman (91) named Rudy appeared and acted as though he knew me. As we chatted, I learned that he had won two Emmy’s for a program he put together years previously titled – “RV, an American Odyssey.” Rudy told us that he traveled all the backroads of the country and loved every minute of it. And sure enough, he went out to his truck and brought in those two Emmys.

When Bill and Tonya arrived to pick us up, Bill said, “Hey let’s take a detour to the Steptoe Butte State Park.” Bill describes himself as a spoiled farm boy who was riding motorcycles by the time he was 14. This part of Washington is his home and he thoroughly enjoys each and every moment and is a consummate storyteller. After a somewhat terrifying ride to the top of the butte (over 4,000 feet) we were introduced to spectacular views of mountain ranges in the distance combined with the contrasting green and yellow fields below.

Shortly thereafter, we arrived in Plummer and thanked them profusely. We are thrilled to be back on a paved rail trail once again – the Trail of the Coeur d’ Alenes. After a very quick 8-mile downhill ride, we have set up camp at the Heyburn State Park.