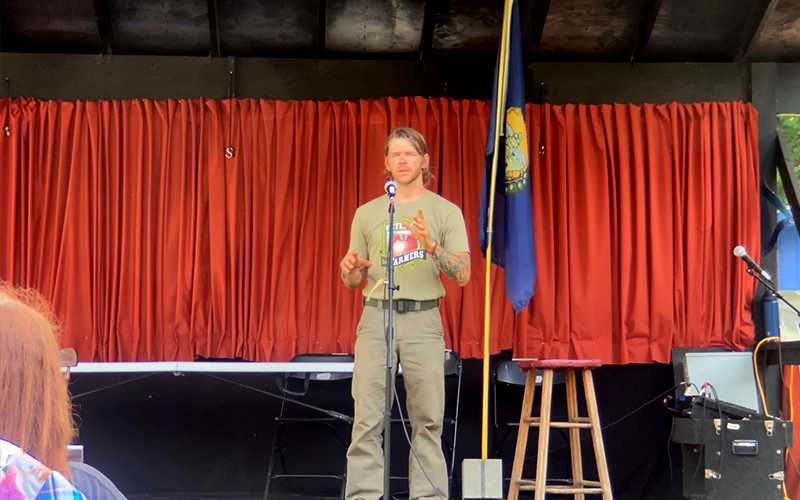 Veterans and community members sat before the stage in plastic Adirondack chairs, in 90-degree heat at the June 27 event. There are an estimated 37,000 veterans in Vermont as of 2019.

During the event speakers displayed a range of emotions. Some speakers expressed a desire for war to end and others spoke of gratitude for their time in the military.

“There’s people who are very proud, then there’s also people who are very angry,” said moderator and host Jon Turner, a U.S. Marine vet who served from 2003-2007 including three tours in Iraq. He now runs a 10-acre homestead educational farm and has organized veteran activities on the farm.

Turner introduced each speaker and helped them up to the stage if needed.

Richard Czaplinski, Warren, served in the U.S. Navy in 1964 in order to go to college. He worked in an office to maintain submarines and their missiles. After returning home, he protested the war.

“I'm not the only one who sometimes objects when people say ‘thank you for your service.’ A lot of veterans I run into object to it, because we know what we’ve done out in the world,” said Czaplinski.

Czaplinski requested a minute of silence to think about what it means to thank a veteran. Bird song became the only sound in the yard.

Turner proposed an alternative. “I’ve always kind of considered, ‘welcome home.’ There’s a lot of vets that weren’t welcomed home when they returned,” he said.

Maureen L. Dwyer worked as a nurse in the 67th evacuation hospital in Qui Nhon, Vietnam, at the trauma and surgical intensive care unit.

As a nurse with a bachelor’s degree in 1968, Dwyer said, “My question to myself was, why wouldn’t I help take care of these wounded, who had no choice, they were drafted?”

She worked 12 hour shifts six days a week caring for allies, U.S., Vietnamese and Vietcong soldiers. Dwyer said they all shared the same light in their eyes.

Dwyer reflected on the similarities between frontline workers in COVID-19 and her time as a military nurse.

Hospitalized soldiers in Vietnam couldn’t see their families and neither could people suffering from COVID due to their contagiousness. COVID nurses and army nurses both served as family to their charges.

“Many of us were the last ones who would see them alive,” said Dwyer.

Dwyer returned from Vietnam to Vermont and struggled with the adjustment.

“A lot of the PTSD for women veterans wasn’t recognized until much later compared to the men, and I went through a major depression in my mid 30s,” said Dwyer.

It wasn’t until a friend from the same hospital went through a checklist of PTSD with Dwyer that she realized it applied to her as well.

Lynn P. Johnson, a sergeant first class that served for 40 years, stayed in the same Qui Nhon hospital that Dwyer worked in twice.

“I never got a chance to thank them for helping me when I was there,” said Johnson. He thanked Dwyer.

Johnson goes to Veteran’s Affairs for weekly meetings. Organizations such as Veterans Affairs are available to veterans seeking support, yet ultimately, it’s up to individuals to make the choice to keep going to appointments, said Turner.

“It’s really difficult when you don’t speak to some of your guys for years and then you hear about someone who took their own life or someone who drowned in the bottle,” said Turner.

For veterans returning from deployment, it can be difficult to adjust back to civilian life. “They had endured so much adrenaline in close-quarter combat that it’s very difficult to kind of turn that off once you return home,” said Turner.

Misha Pemble-Belkin, a retired staff sergeant, spent his deployments in Afganistan’s Hindu Kush mountain range, at elevations of 4,000 to 7,000 feet. When Pemble-Belkin arrived, he said there was a 90% casualty rate.

“I look up there, and there was a full-on fire fight,” said Pemble-Belkin.

He chose to enlist after watching 9/11 unfold on a TV in high school. Despite averaging three to five firefights a day, he still didn’t complain.

“We didn’t have shelter for six months. I slept in the snow, rain, everything. But I didn’t care, I remembered why I went to fight,” said Pemble-Belkin.

Upon returning home, he said, some people didn’t realize soldiers were still in Afghanistan, he said. Some of the last U.S. soldiers recently left Afghanistan, marking the near end of the longest U.S. conflict.

Multiple speakers also mentioned the budget of the U.S. military and the distribution of their funds. In 2020, the U.S. spent nearly $720 billion on the military, according to Statisa.

“That money’s never making it to us on the frontlines,” said Pemble-Belkin. An infantry soldier makes around $44,000 per year, according to the U.S. Army.

Kristen Eaton, the primary organizer for Vermont Vets Town Halls, said the idea originated from Sebastian Junger, author of “Tribe.” In 2015, Congressman Seth Moulton, (D-Ma.) was the first to organize such a town hall in Massachusetts, and Eaton brought that format to Vermont.

The Camp Meade town hall was the first of the 2021 series. The next Vets Town Halls will be held in Newport, Rutland and Burlington. Folks can RSVP and sign up to speak on the VT Vets Town Hall website.