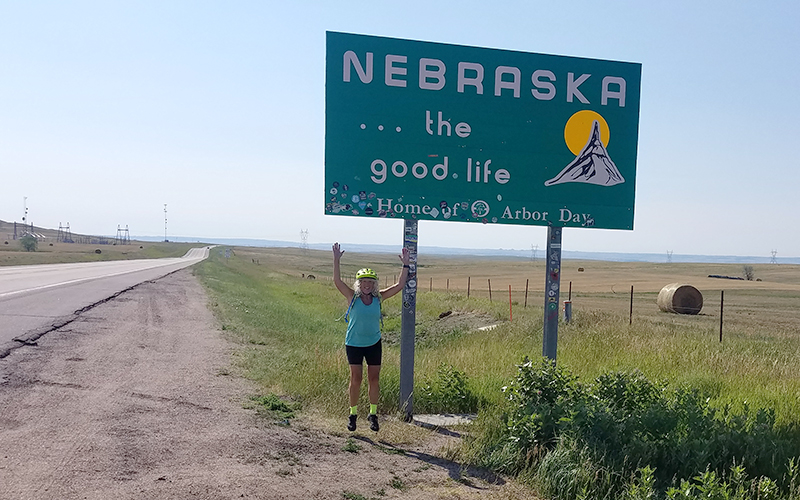 Editor’s note: This is the newest report from Shevonne and Pat Travers, Waitsfield, who are biking Seattle to Washington, DC, on the Great American Rail Trail. Last week, the Traverses started out in Spearfish, SD.

Shevonne writes: The mystery as to why all the parked RVs at the Edgemont Campground were without people was solved on the morning of July 5. “There was a big event yesterday that many of us participated in,” said a young man who was hooking his camper up to his pickup when I asked him where everyone had been. Still curious, I asked “What kind of event was it? “It was a gathering of people from several states to check out some bunkers, listen to some speakers and share a meal,” he said. “I’m from Montana and I don’t know which way this country is heading,” he added. I decided to forgo any more questions.

Back once again at the diner where we were the previous evening, we were surrounded by folks at tables and booths who also had attended the bunker event and were abuzz with excitement. “Let’s get some furniture for our bunker,” one woman suggested to her husband. And another couple with whom we briefly talked were determined to return to Arkansas, sell their home and move here and purchase a bunker.

Pat did a bit of sleuthing about the bunkers and discovered the following: During World War II, Fort Igloo, an Army base, right outside of Edgemont, SD, was charged with bomb development and experimentation. Eighteen square miles under the earth, 575 bunkers had been built that were each 2,200 square feet and could each hold 10 to 20 people. A few years ago, an enterprising individual leased the former base and began marketing these bunkers as “the backup plan for humanity.” For a one-time payment of $25,000 individuals can lease one of the bunkers to wait out the end of days.

Not knowing what to make of this all, we opted instead to concentrate on our present dilemma – how to get from Edgemont to Chadron, Nebraska. Two of the local residents shook their heads when Pat described our plans. “I won’t even drive my pickup through those 27 miles of gravel,” they said. “The rocks are gigantic.”

Because of the holiday weekend, we had chosen to stay an extra day in Edgemont – this time at the local Cowboy Motel and to meet up with our friends Frank and Peggy for dinner at the Hat Creek Café. When Pat asked Frank whether he thought we could handle the gravel roads to Oelrichs, Frank said – “Sure, because you are experienced cyclists.”

With that recommendation, the next morning we pedaled on the 27 miles of gravel, while we searched for prairie dogs who never showed themselves. We did scare a few cows and horses however.

Proud of how quickly we arrived in Oelrichs, we discovered that the advertised campground offered no amenities other than a prefab open shelter with two picnic tables and biting flies, a Pepsi machine and a water pump. There were no showers and no toilets Two trailers with long-term residents were the only other folks on the property and the grass was yellowish brown.

In search of food, we cycled back to the Black Hills Saloon, the only establishment around. While dining on microwaved pizza we studied everything on the walls and learned from the barmaid that the historic bar and mirror were moved here from Deadwood in 1802. Oelrichs is known for its rodeo and is not far from the Pine Ridge Reservation or the town of Wounded Knee. And the bathroom at the saloon wasn’t working so they had put a port-a-let outside.

The next day’s route to Chadron required riding on a U.S. highway for 32 miles. Though it promised a wide shoulder, at the Nebraska border, the road went from a divided highway to two lanes. Other than the casino and restaurant, not yet open at the border, there were no places to stop and grab a cool drink. Thankfully despite some unsteady RV drivers and tractor trailers traveling at speeds over 75 miles per hour, we arrived in Chadron, thirsty but unscathed. Chadron is an old railroad town which is also home to Chadron State College. The main street has shops, a movie theater, a few places to purchase espresso and a natural food co-op.

We located the home of our Warm Showers hosts, Cheryl and Steve Welch. We signed up for this program a few weeks ago after learning that it was created so long-distance cyclists might find a comfortable yard to pitch a tent and make use of the host’s shower. As we entered the yard, we heard Spanish music playing, found some very lively chickens and Leylo, a friendly dog to greet us. We spent the rest of the afternoon with them, learning about their family and their community. Cheryl shared that she had gone to school in Woodstock, Vermont, and then UVM and somewhere along the way had worked for Vermont Bicycle Touring. Her parents had hosted youth from the Fresh Air Program and from the Mohawk Tribe. Then, we discovered that I had once met Cheryl’s mother, Joey, and her now stepfather, Brian, at their musical revue in Mount Snow in the mid-1980s. How fortuitous is it that? Is that one or two degrees of separation? As it turns out, our good friends the Ahernes are good friends with Joey and Brian and that’s how we all met.

After hiking to the top of the ridge behind Chadron to check out the big C and the labyrinth with our hosts, we said our adieus for the night. In the morning, thanks to the work of the chickens we dined on delicious eggs before heading on our way.