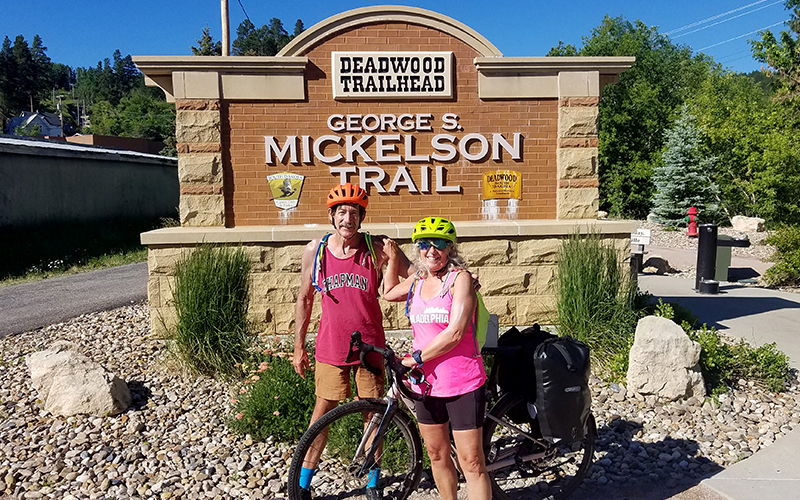 Editor’s note: This is the newest report from Shevonne and Pat Travers, Waitsfield, who are biking from Seattle to Washington, DC, on the Great American Rail Trail. Last week, the Traverses had to make an executive decision to bypass a 500-mile stretch of the trip because they would have had to ride those miles on a two-lane road through the balance of Montana along with cars traveling 70 mph. They disassembled their bikes and shipped them on ahead and took an overnight bus to Spearfish, SD. Check out their blog for details about the overnight bus trip!

Shevonne writes: Over the past several days Pat and I have found many nuggets of gold in these here Black Hills. First, while patiently waiting for our bicycles to arrive from Missoula, we camped for three nights in the town’s campground next to a babbling brook, an historic fish hatchery and the town park, equipped with six pickle ball courts, a polywood playground and an open-air amphitheater. We met other cyclists and we had a beer with Pete and his golden retriever, GlenLoveIt, (a therapy dog) from Craftsbury, Vermont. They are traveling the country this summer on a BMW motorcycle. Glenloveit rides next to Pete in the yellow sidecar. In the past few years, they have logged 22,000 miles together.

Every morning, 365 days a year, Kerry Sue and her therapy duck, Mr. Duckery Doo, (who she wore in a baby sling of sorts) come down to feed all the wild ducks in the park. Mr. Duckery Doo will only eat if he can share his food with the other ducks. “He is the best kind of partner for me,” she said. “He doesn’t talk much and if when we get irritated with each other, we take our private time-outs.”

On Friday, bikes ready to go, we caught a shuttle up to Deadwood, the start of the George S. Mickelson Trail. This trail is a former railroad that was first built to carry supplies and passengers during the gold rush years. It is 108 miles long, has 100 trestles, four short tunnels and involves plenty of uphill climbs and downhill coasting. It was in the Black Hills that Lt. Colonel George A. Custer discovered gold in 1874. As times changed, however, the rail line had less and less business, eventually shutting down completely and removing the rails. Thanks to the efforts of the former governor (for whom the trail is named) and several other advocates, it is now a cycling destination.

Our goal for the day was Hill City and by the time we arrived we were fairly exhausted from the climbs and the heat of the day.

Hill City had advertised several celebratory events for July 3 and we decided to stay on to catch the parade (the first one they have had in 28 years), partake of the pie and ice cream social and hear the Rusty Strings Band and Jill and Allen, known for their fine cowboy songs and to meet Mayor Kathy.

On the morning of July 4, as we were packing up, our tent neighbors invited us to join them for a hot cup of coffee. That was a true nugget of gold as we are not carrying anything to heat up food or water. Thanks to Shane and Victoria and their children for the lively conversation.

Another long uphill climb brought us to the road next to the Crazy Horse sculpture. A fellow rider told us a little bit about the sculpture and then warned us that there was lots of sand on the trail ahead of our descent into Custer. He wasn’t kidding. We arrived in Custer in time for their dedication of a new U.S. flag complete with the color guard, the singing of the national anthem and a gun salute.

On the other side of Custer, we crossed paths with Shane from Prescott, Arizona. Shane is loaded down with plenty of gear, a few bicycle flags and has been traveling since early May. We think we may run into him again as we near Washington, DC.

Shane told us we had about 30 miles of a downhill grade into Edgemont, our final destination. Sixty miles later, we arrived and the bank sign’s temperature read 96 degrees. Other than an exhausted dog sauntering in the middle of the road, Edgemont was eerily empty as was the campground. Though there were eight RVs at other sites with air conditioning running, there were no people. (More about what we discovered in a subsequent blog.) Ready for dinner, we cycled to the nearest open restaurant and shortly thereafter met townsfolk, Frankie and Peggy and George Lingo and his ex-wife who traveled for their meal in a golf cart. Frankie and George are musicians and Frankie gifted us with one of his CDs.

Back at the campground, fireworks were being set off everywhere or so it seemed. Add to that a wicked windstorm with lightning in the distance and the constant freight trains passing through meant sleep was out of the question. At 11:30 p.m. three vehicles pulled up next to the campground and began setting off a barrage of fireworks in the abandoned tennis court very close to our tent. After enduring this for 25 minutes, I checked in with the local 911 dispatcher. Her response was classic. “We have an ordinance here that says fireworks can be set off until 12:01 a.m. They have six more minutes of time. “And indeed, just had she had stated, they shut them down at 12:01 a.m. Happy Fourth of July.