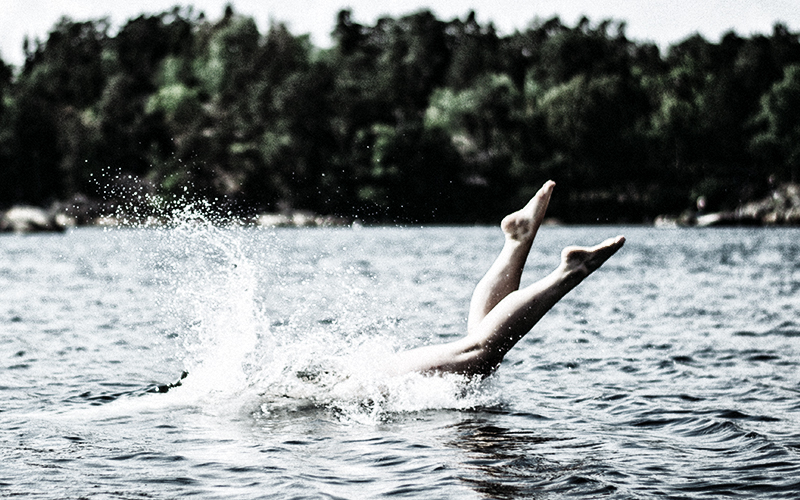 On the grassy trail towards a Waitsfield swimming hole, there are no signs designating the section of the river as being clothing-optional. Still, local dog walkers and hikers know what to expect beyond the twisting path that leads to the Punch Bowl.

The path is visible from the Sugarbush Snowmaking Pond trail, where many walk dogs or bike. One bicyclist on Saturday, June 7, ventured down the path to the river and looked out at the swim hole to see six naked adults sunbathing.

Pat, a regular of the Punch Bowl for 35 years, said that in the past “locals would come down after chores and stuff and go swimming.” The Valley Reporter is not using his last name to protect his privacy.

“It’s my happy place. It’s my de-stressing zone,” said Pat. Other nude swim holes like the Punch Bowl exist around Vermont. The Ledges off of the Harriman Reservoir in Wilmington, Vermont, is a destination for nude swimmers, according to a list of Vermont swimming holes from SwimmingHoles.org.

The Rock River in Williamsville is a popular nude and gay swimming hole that’s protected under the nonprofit organization Rock River Preservation, according to a 2020 article from the Vermont Pride Center. The Punch Bowl is not an anomaly, and it’s also legal.

Vermont’s Lewd and Lascivious Conduct law, states that it’s legal to be naked in public but illegal to disrobe in public. The law is designed to prevent indecent exposure. When it comes to swimming, the law is adjusted.

Swimmers can legally remove their clothes at the Punch Bowl, which is entirely on private property. In a 1971 memo to the police, then-Chittenden County State’s Attorney, and now senior U.S. Senator for Vermont, Patrick Leahy, wrote that: “On private land out of view of the public: The state has no legitimate interest and swimmers should be left alone.” In partially secluded areas, “if no member of the public present is offended, no disorderly conduct has taken place,” wrote Leahy.

Pat communicates with the landowners, Claudia Becker and Eugene Jarecki, and he resolves problems. “Most of the time if I tell people to knock it off, they stop,” because “people don’t argue with a big guy,” Pat said.

Becker co-owns the Punch Bowl with Jarecki. They bought the property in December 2016 from Albert Freeman. He sold it “because he knew that we intended to keep it open as a public swimming hole,” said Becker.

In 2020 during the pandemic, Becker closed the Punch Bowl after seeing “out-of-towners and out-of-staters coming in,” and “the new influx of people unfortunately are not always that respectful and kind,” said Becker.

“We would love to keep it open as a public swimming hole. It has been that since the 1920s,” said Becker. The Punch Bowl will reopen for the summer on July 1, Becker said.

Another privately-owned swimming hole, the Bobbin Mill, closed in September 2020 due to newcomers ignoring the rules, according to a Valley Reporter article.

“It's tricky because the river is public, but it's also our backyard so the concern is, you know, are people going to treat this with respect and with a level of mindfulness that we would need to see to keep it open or not,” said Becker.

“I think sometimes people get confused with nudism and other things. It’s not about sex. It’s about sun and fun and meeting good people,” said Troy, another regular at the Punch Bowl.

Pat mows the lawn and collects trash from the swimming hole, and Becker wants to maintain the relationship.

“I would want to make an appeal to the public to treat these, these pieces of land, with love, because otherwise they're all closed down,” said Becker.

Editor’s note: This article was written by Jennie Mull, a student at the University of Vermont and a reporter for the Community News Service, a student-powered partnership with local community newspapers.