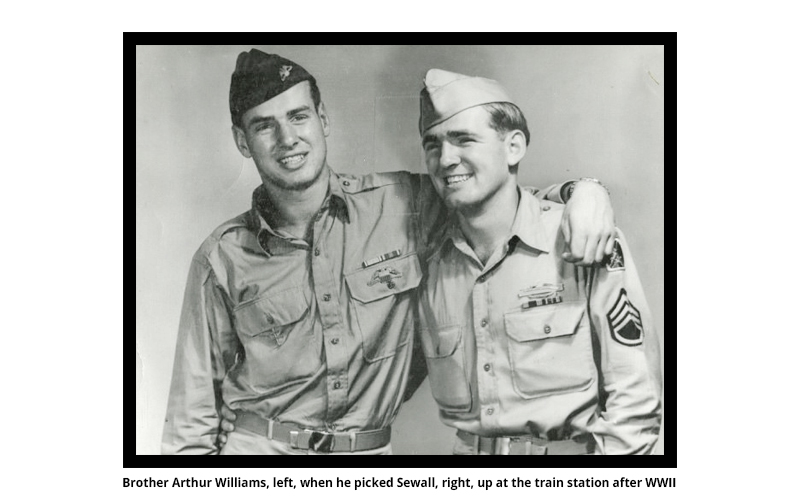 I regret that when I was younger, I didn’t take the time to ask older people questions. Never mind, really listen. In my first article, Sewall Williams, actually Harold Sewall Williams, but everyone called him Sewall, and his brother Arthur were very kind to us, bringing us pictures and memorabilia of our business (the Hyde Away) back when he owned it. He was quite good at telling stories, but I had two babies and was running around trying to renovate. It was only when I started doing research for this column that I realized what drew him to our mountains was his years in the Tenth Mountain Division in World War II. This was an elite ski troop. In fact, they’ve been called the men who invented the United States ski industry.

Luckily a historian named Jane Beck conducted a taped interview in 1994 before Sewall died. It is preserved and archived by The Vermont Folklife Center.

He told her, “Well, shortly after the war, I’d gotten out of the hospital two weeks before Christmas in 1945, I went back, and finished prep school.” He volunteered for the war as a teenager.

More explanation was given in his brother Arthur’s memoir. They were both at St. George’s School in Rhode Island when the Japanese attacked Pearl Harbor in Hawaii. “… the country went sort of nuts, since we were so unprepared… I think that among the boys we all just wanted to get out of school… When we went home for the holidays in 1941, the talk was all about war.”

His interview continues, “And then I said to myself, rather than going on to college, I've got to get into some kind of a business of where I'm gonna be able to use my legs and strengthen my legs and get back on my feet because I'd gotten polio over there in Italy, right after combat training

“And I had heard that a new ski area was opening called Mad River Glen, and that there were very few places that were gonna be accommodating skiers, so I said, to my mother why don't the two of us drive up there and see what there is in the way of a place that we may even be able to buy and remodel.”

Sewall converted a farm and ran it as a lodge for four years. Try to remember there was no snowmaking back then. He said, “…the skiing conditions were really pretty poor, for that whole four years so I sold my lodge to a man named Damon Gadd from Hawaii, and I left and moved to Connecticut with my wife.”

While Sewall was starting a new life elsewhere, Gadd opened Sugarbush. Sewall was invited to return to The Valley to manage ski and sports shops. And the rest, as they say, is history.

Sewall recounts in his interview that many of his fellow soldiers also wound up in the ski business. “So, I feel really that the Tenth Mountain Division pushed skiing ahead of its time. Which may have taken say five or six or seven years to really become a real sport.” Talk about turning adversity into opportunity! Amazing.

Have a memory to share? Or a person or organization you’d like to nominate as a subject?

Email me at: This email address is being protected from spambots. You need JavaScript enabled to view it.