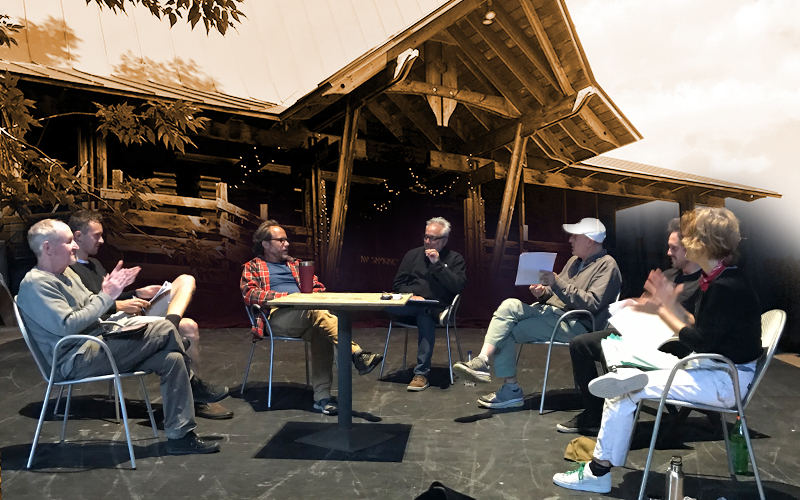 Entering the Phantom Theater’s Edgcomb Barn, which was purchased from a Sears Roebuck catalog 30 years ago, feels like coming home. Or, at least, that’s how it seems for the group of actors that have been working together for decades. There were a lot of hugs and warm welcomes as the actors arrived from across the country earlier this week to rehearse their latest play, an original adaptation of the 1979 sci-fi film,“Alien.” Some of these acclaimed actors have been performing at the Phantom Theater since it was founded in 1985. “It’s like a reunion,” Phantom Theater board member Janet Hubbard of Warren said.

The theater moved to Jim Edgcomb’s barn in Warren in 1991. The troupe of seasoned actors performs original plays and puts them together in one week of rehearsals. Hubbard called the process very collaborative and said the unique thing about the theater is “how they work as an ensemble. They all know each other’s styles. It’s a real community.” Phantom Theater was founded by Cat Carr, who now lives in San Francisco and was unable to make it to this show.

PERFORMING AT PHANTOM SINCE 1987

Umit Celebi, who is playing the character of Brett, has been performing in Phantom Theater shows since 1987. He’s done six shows with the group, including one as director. The reason he hasn’t done more performances here, he admitted, is because being in such a beautiful setting can make it hard to get work done. But, he said, there’s no other group he would expect to be able to put a show on in a week like the Phantom crew does. “It’s a group of people I’ve known for a long time and trust,” he said. Celebi is known for his roles on “Law and Order: Special Victims Unit” and Marvel’s “The Defenders.” He adds comedic relief to the play, which is dotted with humor and satire and has been described as “Alien” meets “Spaceballs.” Celebi described the play as a mix of lightness and real suspense. “We seem to have found the funny bone,” he said.

Writer Lucas Bates, 29, of Warren grew up at Phantom Theater. His mother, Tracy Martin, is the artistic director. Bates was inspired to write the script for “Alien” by the performance of “Jaws” the theater put on three years ago. Bates said, “I just thought it was really fun and these actors pulled that off in a week, just like this. When I watched ‘Alien’ I saw a lot of similarities between ‘Jaws’ and ‘Alien’-- these really fun interactions between characters. It’s really funny how similar the characters are.”

During the pandemic, The Pitcher Inn bartender threw himself into the play’s script. “During the pandemic I found myself with some free time. I brought it to my mom (Martin) and she brought it to the gang. I’ve been working on the script pretty much nonstop for a couple of months,” he said, “constant rewrites, figuring out the character interactions, which has been tough on Zoom. Getting all the actors together in the same space has been tremendously helpful, just to figure out how everyone interacts with each other.”

The 1979 science fiction/action film starring Sigourney Weaver and directed by Ridley Scott had a budget of $11 million. The stage adaptation of the film coming to Phantom Theater in Warren August 6 and 7 has less than that. Bates said the troupe puts on shows, “In the simplest, cheapest way possible. Everything we do is like that. Using the barn as a ship. Using what’s at our disposal.” When asked how and why actors would subject themselves to putting on a show in a week, he said, “It’s just the nature of the beast. This is not our job, so it’s finding time that everybody could get together and pull this thing off.” Celebi called the collaborative nature of Phantom Theater “so refreshing.” Actor David Sinaiko, who plays the character of Dallas, added, “Part of it is embracing and working with the chaos.”

Bates was particularly intrigued by the film’s heroine, Ellen Ripley, who he described as “a badass.” The role launched Sigourney Weaver’s career and was a breakout for women in action films. Jeanne Darst plays Ripley in Phantom’s adaptation. Darst, author of “Fiction Ruined My Family” (Riverhead Books, 2011), “This American Life” regular, and contributor to The New York Times, is no stranger to Phantom Theater. She adapted the 2018 performance of “Jaws” and wrote and performed the plays “Je Regrette Tout” and “Sally on the Mount” after being hooked by a performance at the Phantom Theater in the late 1990s.

Like all live performance spaces, the theater went dark for the first time since 1985 last year due to the pandemic and the crew’s energy and excitement at returning was palpable.

“Alien” was originally slated for two performances but, due to high demand, the crew decided to add a third performance to the weekend. Tickets are first-come, first-serve with a suggested donation. Performances will take place Friday, August 6, at 8 p.m. and Saturday, August 7, at 7 p.m. and 9 p.m. The performance is R-rated.