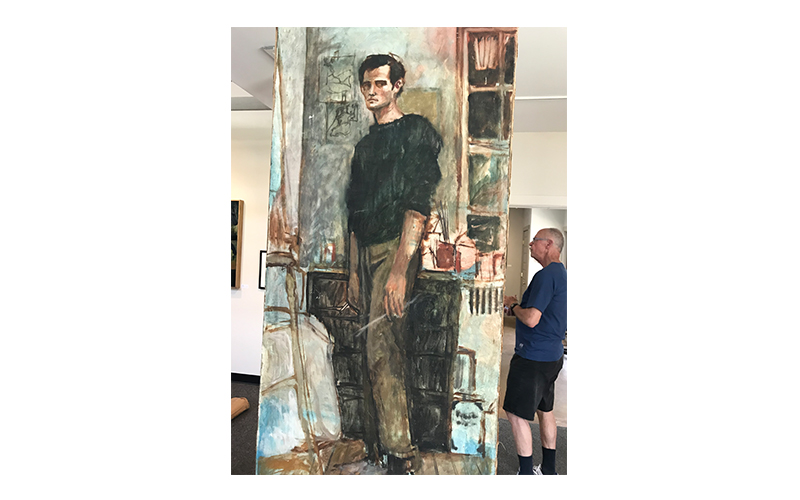 The Bill Brauer Retrospective at the Mad River Valley Arts Festival Gallery in Waitsfield opens with a public reception Friday, August 13, at 7 p.m. (a private reception will take place Thursday, August 12). The show was delayed a year due to the COVID-19 pandemic following Brauer’s death in 2019. The artist was known locally as “Billy” but used “Bill” in his work. The exhibit will be open to the public until October 9 and catalogs the work of the longtime Warren resident. The exhibit showcases nearly 30 of Brauer’s drawings, paintings, sculptures and etchings, including never-before-shown works-in-progress.

Brauer is best known for his sensual oil paintings depicting female figures, though his early work was primarily in print-making. He received the New Talent in Printmaking award from the Associated American Arts in 1974. He was commissioned to paint a recommissioned harpsichord, which Bill’s widow Wendy Brauer said was “pivotal for him transitioning from etchings to paintings.” While the harpsichord will not be on display at the exhibit, photos and drawings of his process of creating it will be. Articles and artifacts from his creative process, such as pallets and brushes, will also be on display. Curator Gary Eckhart said, “Billy has been very well known around The Valley for the posters for the opera festival.” Brauer also taught life-drawing classes at the gallery.

Wendy Brauer was a frequent model for her late husband and her likeness is captured in several of the paintings displayed, which are primarily from her private collection. She said many of these works have not previously been displayed publicly. Brauer’s 2016 show at the Bundy Museum in Waitsfield was his first big show in the area for many years. Despite living in The Valley for more than 40 years, he showed mostly out-of-state, including in the Brooklyn Museum’s permanent collection. He sold work both nationally and internationally.

The Valley Arts’ press release said, “Brauer’s painting transitioned through many changes over the years. Nearly always figurative, consistently evocative and frequently sensual, he strove to be a Renaissance painter while employing contemporary design and color concepts.”

The paintings’ vivid colors and intimate nature are captivating, while his etchings show remarkable attention to detail. “The more you look at them, the more you notice,” Wendy Brauer said. “Every painting tells a complete story.”

Most of the paintings and some of the etchings on display at Mad River Valley Arts Festival Gallery will be for sale.