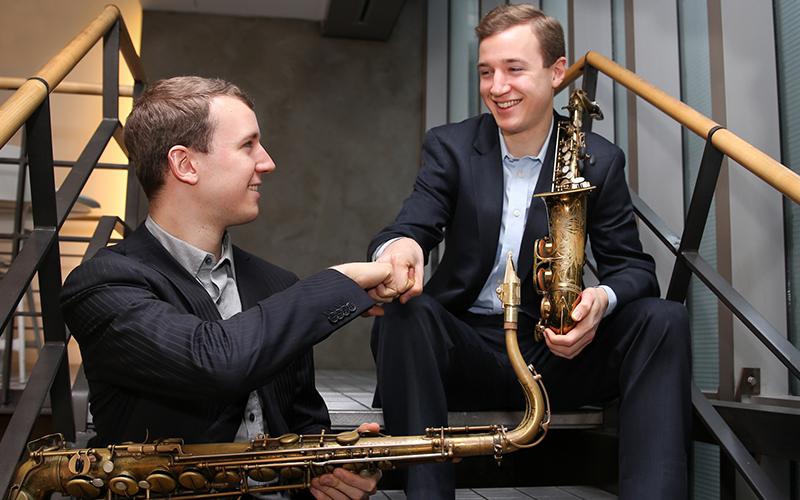 Being identical twins can have its advantages, such as being able to share clothes. But for identical twins who happen to be jazz musicians, the benefits rise to a whole new level. The close bond that begins forming in the womb can play a critical role decades later in the dynamic musical interplay central to jazz. Clarinetists and saxophonists Peter and Will Anderson are a case in point.

“We’ve been playing side-by-side for over 20 years,” said Will Anderson. “Playing jazz involves improvising and reading musical and nonverbal cues. My brother and I have gotten very good at anticipating what the other one will do next, and it makes it fun to play together.”

The Anderson twins, along with guitarist, Adam Moezinia, will be returning to Phantom Theater for a performance on August 22. They will be offering their renditions of American Songbook gems, swing and blues, Brazilian Bossa Nova, Afro-Cuban hits, as well as some fresh originals.

Graduates of the Juilliard School of Music, Peter and Will Anderson have performed with the Jazz at Lincoln Center Orchestra, Vanguard Jazz Orchestra, Wynton Marsalis, Paquito D’Rivera, Lou Donaldson, Jimmy Heath and Wycliffe Gordon, among countless others. They’ve headlined at Carnegie Hall, The Blue Note, Jazz at Lincoln Center, The Kennedy Center, The New Orleans Jazz Festival, and Birdland, and toured extensively both nationally and internationally.

They’ve been called “Virtuosos on clarinet and saxophone” by the New York Times, while the Washington Post said their music “imaginatively unfold[s] in ways that consistently bring a fresh perspective to jazz.” Vanity Fair magazine listed their debut album alongside Miles Davis in “Four New Releases to Make You Love Jazz.”

Peter and Will Anderson’s August 22 performance at Phantom Theater will begin at 8 p,m. Admission is by donation.