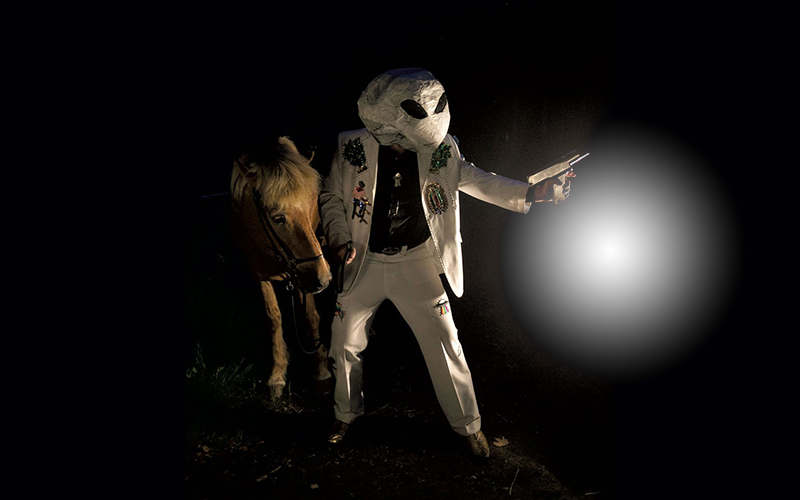 Camp Meade in Middlesex will host a social justice celebration expected to attract members of Vermont’s congressional delegation and the screening of the film “The Ballad of Ethan Alien,” a sci-fi musical created during the pandemic by the group the Western Terrestrials.

“The film is uniquely Vermont,” said the film’s producer, Barnard-based filmmaker Teo Zagar, “yet it highlights concepts that will resonate well beyond the Green Mountain state, such as inclusivity, collective action, diversity, anti-racism and the importance of artistic expression.” The film combines elements of science fiction, music and Vermont history and creates a cinematic experience that will remind audiences of the essence of Hadestown, Bread and Puppet, Phish, Grace Potter, Fred Tuttle and the rich tradition of the Vermont arts.

“The Ballad of Ethan Alien” features appearances by Vermont notables such as Ben and Jerry, Kiah Morris, Luis Guzman, Jen Kimmich, Rusty “The Logger” DeWees, Bill “Spaceman” Lee and Christine Hallquist. The final product features the work of more than 75 Vermont-based film and music production professionals, performers, artists and creatives, many of whom have struggled to find work during the pandemic. The film features the music of the Western Terrestrials, Sarah King, Brass Balagan, Bow Thayer, Sara Grace and Ben Dunham and other Vermont artists.

“Beyond giving meaningful work to a host of Vermont artists during a challenging time, the film will be the first professional credit for many of the talented young people involved,” said Nick Charyk, front man of the Western Terrestrials and the film’s creator. “This project has been a bright light during a trying time for so many people. I know it has been for me.”

CELEBRATION OF WORKERS AND SUNDAY SUPPER

On Sunday, August 29, Camp Meade and Ren Hen will host a Main Street Alliance event -- We Believe in Paid Leave – a celebration of workers, families and small businesses around paid leave initiatives in the Legislature. It takes place from 3 to 5 p.m. and is followed by Sunday Supper which starts around 4 to 5 p.m. and features music by Lowell Thompson and Friends.

The free, outdoor event was developed by Vermont Family and Medical Leave Insurance Coalition (VT FaMLI Coalition) with support from Well Told Films of Montpelier, and Design Choice of Burlington. “We Believe in Paid Leave” is a social media and video campaign lifting up stories from throughout Vermont that highlight the urgent need for the passage of an equitable and national paid family and medical leave solution.

“We know that no one chooses when they get sick or injured and that for most families, nine months is not enough time to save for an adequate parental leave. An equitable, inclusive and comprehensive paid family and medical leave solution would ensure that all workers have the financial security to put their health and safety first,” said Morgan Nichols of the Main Street Alliance.

This event will include activities for kids, music, food and drink and opportunities to lift up people to voice their support for paid family leave. Red Hen will provide ice cream sandwiches for all guests.

Food and libations will be available throughout the weekend at Camp Meade including refreshments from its Summer Shack featuring offerings from creemees to BBQ, vegetarian and vegan, hot dogs, PBJs, watermelon and more.