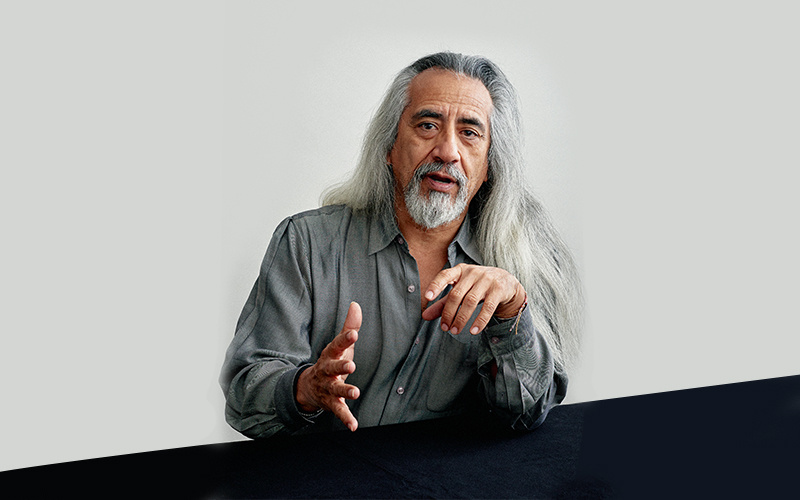 George Emilio Sanchez is an actor, activist and chair of the Department of Performing and Creative Arts at The City University of New York. He arrives Thursday night at Phantom Theater to present the second part of a performance series he is in the process of creating titled “Performing the Constitution.” (The first, title “XIV” dealt with a 1946 Appellate Court case that used the 14th Amendment to overturn the segregation policies that kept Mexican-American children out of public schools in California.)

“In the Court of the Conqueror” explores two centuries of Supreme Court rulings affecting Native American sovereignty. As part of his artistic research, he enrolled in a 15-month intensive online program that offered a Masters in Legal Studies in Indigenous Peoples Law out of the University of Oklahoma. Almost all of the other 23 students were tribal members around the country. This, Sanchez said, “Performance allows me to breathe and be in my own body and imagination. It is a place where people can experience what and how living lives in us.”

He performed “XIV” in 2019 at Phantom Theater to rave reviews. When asked if he feels a different political and cultural climate from two years ago, he said, “Without a doubt, it’s different. The George Floyd murder catapulted the Black Lives Matter movement into national awareness in ways no one could have imagined. Currently, we see the political and cultural climate going from addressing anti-racism to debating the merits of Critical Race theory. The voter suppression laws in Republican states, although no surprise, are alarming and reverse the ideals of the legislative acts of the 1960s. Since the Standing Rock uprising, there is an indigenous movement called ‘Take the Land Back’ that is building power and awareness within certain circles around the country, yet not enough on peoples’ radar.”

Sanchez’s indigenous roots are from his family’s homeland of Ecuador. Part of his performance piece is recognizing and acknowledging his indigeneity that goes against all his family wanted him to believe about who he was and where he came from when he was a kid growing up in California. He feels this is why this piece is the performance all his other works have prepared him for. “I never imagined then I would be who I am or where I am today,” he said. This includes being in constant community with other artists, activists, young people, elders -- from all cultures and generations. “It keeps me going and striving for the unimaginable,” he said.

Sanchez’s performance is a wonderful opportunity to bring the various groups together in a theatrical setting to create one voice.

Masks are required and will be available at the theater.

“In the Court of the Conqueror” opens Thursday, August 26, and runs through August 27 at Phantom Theater in Warren, within a mile of the East Warren Market on Dump Road and Airport Road. Both shows are at 8 p.m. Suggested donation of $20. Seats are on a first-come, first served basis. For directions and additional information, go to www.phantomtheater.org, and/or call 802-496-5997. For information about coordinating or bringing groups, call Janet Hubbard at 802.496.2851.