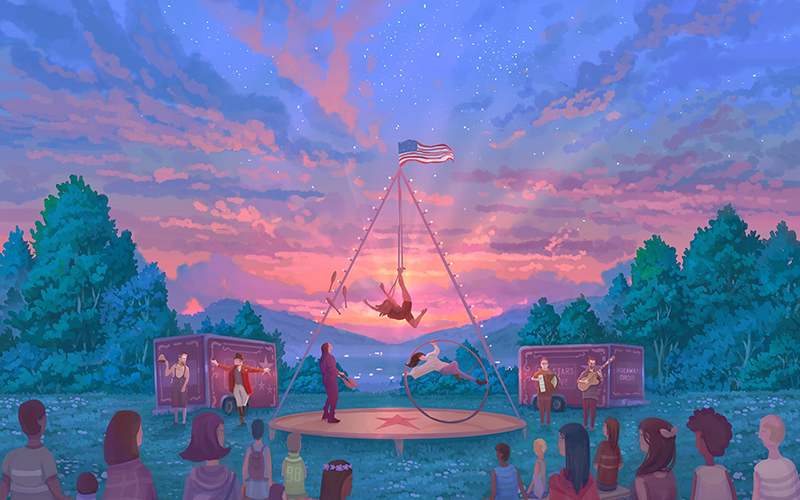 Hideaway Circus, a Brooklyn-based circus and dance company, will be presenting its family-friendly show “Stars Above” at Lareau Farm/American Flatbread on September 13 and 14 as part of a tour of the Northeast. “Stars Above” is a modern, yet nostalgic take on the circuses that toured the country in the 1800s.

Featuring a cast of circus performers and musicians, the show centers around a day in the life of a traveling family troupe. Combining elements of contemporary and classical circus, “Stars Above” explores and celebrates interwoven connections to loved ones, community and how it has changed. The all-ages production is performed outdoors, under the canopy of sky and stars, on a custom-built circular stage and aerial rig.

Hideaway Circus is the brainchild of husband-and-wife team Josh and Lyndsay Aviner. The company’s original theatrical productions include the two-time Drama Desk-nominated dance show, “Beyond Babel,” which was a critics’ pick of The New York Times, and the genre-defying slasher circus show “Slumber,” which Time Out NY described as “contemporary, sexy and a little bit dangerous.” The Avinars also host a popular and award-nominated Hideaway Circus Podcast featuring interviews with creators in circus, dance and theater arts. Additionally, as a teenager, Josh Aviner was a performer in Circus Smirkus, the Vermont-based youth circus troupe.

The Lareau Farm shows are being presented by Phantom Theater and are suitable for all ages. There will be a 7 p.m. performance on Monday, September 13, and 4 p.m. and 7 p.m. performances on Tuesday, September 14. Tickets can be purchased in advance at https://www.showclix.com/event/stars-above-waitsfield-vt. In case of rain, the company may pause or delay the performance. If a performance must be canceled due to the weather, it will be rescheduled for September 15. General admission tickets require bringing your own chair. Reserved and VIP seating options are also available.