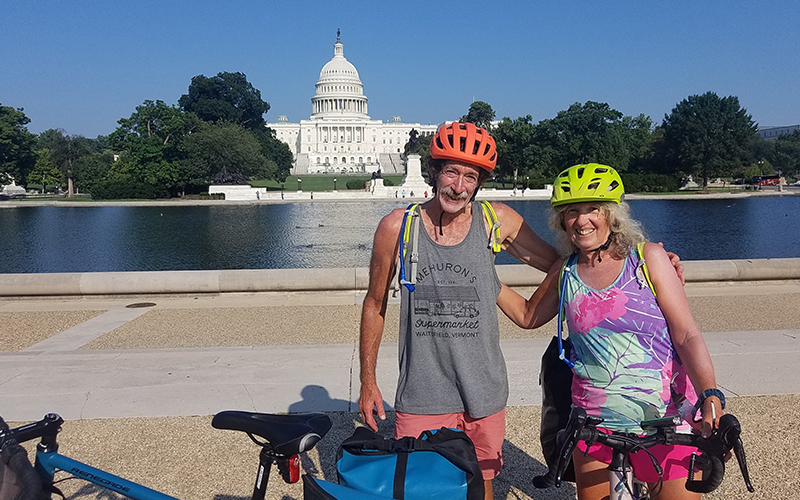 Pat and Shevonne Travers’ exuberant dogs were wet from a morning romp in the rain when they sat for an interview a few days after they completed a 77-day bike trip from Seattle to Washington, DC, using the Great American Rail Trail (for the most part).

They completed their journey in Washington, DC, on August 24 and spent a day or two decompressing with Shevonne’s sister in Virginia before loading their bikes onto their car and returning to Vermont. Last week, on August 31, they sat for a Q and A about their adventure.

VR: What was the first thing you did when you got home?

Pat: Told people we made it, sent our housesitter Liam home and took showers. Liam turned 21 while he was here and he did a great job. We were invited to a dinner party last night and there were eight people there for a welcome home party.

Pat: I don’t know if it’s surreal. It’s certainly different. To me it seemed really quiet in terms of stimulation, like every day was ‘okay, we’re going to see more places and go another 50 miles today.’ I started work today at 8 a.m.

Shevonne: We were meeting new people every day and now we’re not.

VR: One thing that struck me is that all the way across the country, you found yourselves relying on the kindness of strangers, over and over again, in almost every state.

Pat: I’ve said this to several people; it was amazing what help we got from total strangers. This trip has really restored my faith in humankind, especially because of all the negativity that was out there for the last four years during the Trump administration.

Shevonne: It was nice to have people be so nice. Positive things happen out there. I think when you’re one-on-one with people it’s different and we weren’t getting into anything political.

VR: I know from your blogs and submissions that you had some equipment failures with Shevonne’s bike and it made me wonder what you brought that was really useful. What one thing was the most valuable in terms of equipment?

Shevonne: My Camelback! I didn’t have to stop and worry about falling while reaching for a water bottle. I could drink while riding. I’d never wanted one of those on my back, but now I think it’s perfect.

Pat: My bike can’t accommodate a kick stand so this couple we ran into from Middlesex while on a trial run suggested I get a clickstand which is about 30-inches long and you stick it into the ground to prop your bike up. Otherwise, I would have constantly had to lay the bike down or prop it against a tree.

Stayed tune for Part 2 of The Valley Reporter’s interview with Shevonne and Pat Travers.