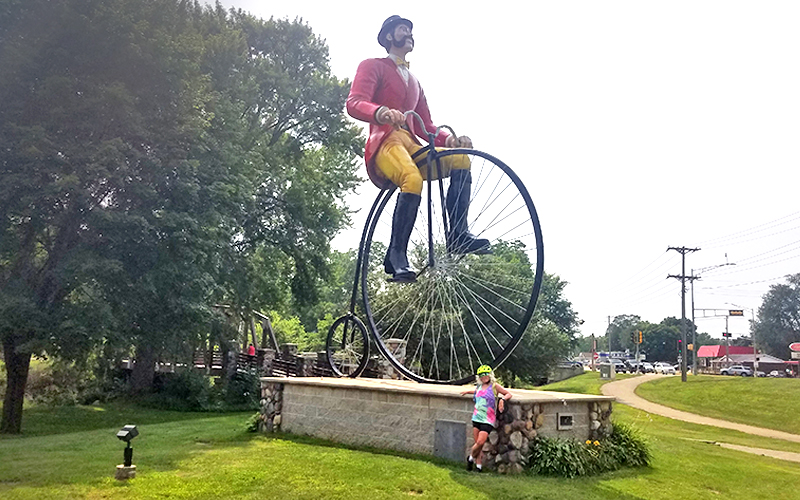 “Aren’t you going to go and talk to that person sitting over there?” Pat said to me as we were cycling along the La Crosse River Trail in Wisconsin. We introduced ourselves to Miranda who with her partner Phil was cycling from La Crosse to Milwaukee and taking the Amtrak back to their vehicle in the train station parking lot. We learned that they have plans to be in Vermont in late summer and are interested in good cycling trails and good breweries.

That afternoon we arrived in Sparta, which promotes itself as the bicycle capital of the country. The 32-mile Elroy to Sparta trail was established in 1967 and was the first rail trail in the U.S. That is etched in my memory because years ago my father caught wind of the news and proposed that our family pack up our bicycles and give the trail a whirl. When I heard of this plan (at age 11), I was ecstatic. For whatever reason this trip never took place. Now at the age of 65 I am fulfilling this childhood dream.

The Sparta Trail was a bit soft in places but as Pat said – “Wisconsin knows how to treat their trails”. It wasn’t long before we entered our first tunnel -- close to a mile long. Only two more to go along with a detour on a busy highway.

When we came to the second closed section of the trail, I balked. I wanted to do the entire trail and regardless of the fence and signage that said trail was closed, I ignored it. In fact, I also ignored the next sign that said “Bridge Out,” thinking that perhaps they had fixed the bridge and not taken the closed sign down. Not! Pat shook his head, mumbled a few choice words and we retraced our steps to the highway. And so, we did complete the trail but had to cycle the last 7 miles on the road.

After a water break, we were ready to keep on cycling another 22 miles, this time on the 400 Trail (named such because of a locomotive way back in history that covered the territory between Chicago and Minneapolis (400 miles) in 400 hours. And 14 miles into our ride we caught up with Miranda and Phil. Turns out we were all planning on camping in Reedsburg at the local town campground equipped with a shelter, a few tables and a shower.

We set up two campsites and walked into town for dinner at the local brew pub. Upon our return, the skies had clouded over and we could see some flashes of lightning in the distance. After showering and getting into our muggy tent, we heard a scream and saw Miranda and Phil running from the picnic shelter. “Hey what’s going on?” I yelled out. “There’s a rattlesnake next to the trash can,” Miranda answered.  Two hours later, the storm came in full on with wicked winds, plenty of lightning and thunder. Pat and I decided to make a run for it – zipped up the tent,and ran to the shelter. The snake was nowhere to be found. In the morning we shared a meal Miranda had prepared. We cycled 7 miles before each going in different directions.

Over the past three days, we have cycled 135 miles east through Wisconsin. We’re now outside of Racine, a city on Lake Michigan. We’ve gotten spoiled by the network of Wisconsin State Trails, which crisscross the state, are very well maintained and heavily used. We have also enjoyed spending a few evenings with Wisconsin residents through the Warm Showers program.

Warm Showers is a concept where fellow cyclists agree to host traveling cyclists passing through their town. Cyclists download the Warm Showers app and then look for hosts in towns where they plan to stay for the night. We are told it’s all part of that “cycling karma.”

After that wild overnight in Reedsburg, we set out on Thursday for our only day in Wisconsin where we had to spend the entire time on roads as we made our way to Sauk City on the Wisconsin River.

There we stayed with Warm Showers host, Kelly. Kelly is very animated and we had no problem carrying on a conversation with her for the entire evening. Kelly’s mom, Mary, was also staying there for the night and she enjoyed showing us she is the queen in a game of Yahtzee!

The following morning, we set out for Madison, Wisconsin’s, capital. Madison is a magical city, situated on two lakes. We saw plenty of people kayaking, sculling and waterskiing. It is also an absolute Mecca for bicyclists. There are scores of bike trails throughout and designated bike lanes on many of the city’s main streets. We saw cyclists everywhere and rode by a couple of signs that keep count of how many cyclists pass by each day.

One, on the Southwest Commuter Path, indicated that 500-plus bikers had passed by that day. Another, on the Capital City Path, stated that some 1,167 cyclists had gone by that day, and it was only 3 in the afternoon! While we were getting some serious bicycle repairs done at Machinery Row Bicycles, we headed over to Great Dane Brewery and enjoyed a couple of IPAs.

That evening we stayed with Aram and Polly, on the east side of Madison. Between the two of them, they have worked and traveled in Asia and Africa and are certainly keen for more adventures. Aram had prepared a Lebanese meal with hummus that is the best we have ever tasted!

After departing Madison, we set our sights on the Glacial Drumlin Trail, which stretches 53 miles from Cottage Grove to Waukesha. Things were going great until we got to just east of Sullivan, where some tornadoes had recently passed through. After navigating our way around a couple of blowdowns, we got to a spot which was impassible and had to jump over to US 18 for a few miles. We rejoined the Glacial Drumlin Trail and rode it from Dousman into Waukesha.

On Saturday, we traveled from Waukesha to Racine via the New Berlin State Trail, Milwaukee County’s Oak Leaf Trail and some back roads in Racine County.

Thanks to the forward thinking of the parks commission in the early 1900s who purchased and protected the land, Charles B Whitnall, the landscape architect who designed the parks in a necklace of green, and Zip Morgan, a staunch bicycle advocate, who conceived the idea of the Oak Leaf Trail, there are some 135 miles of trails connecting several county parks throughout Milwaukee County. Portions of the trail follow the rivers and run along Lake Michigan.  We, New England folks had no idea of the richness within Milwaukee.

Here’s a link to their website: (blog is linked at top) https://twos>