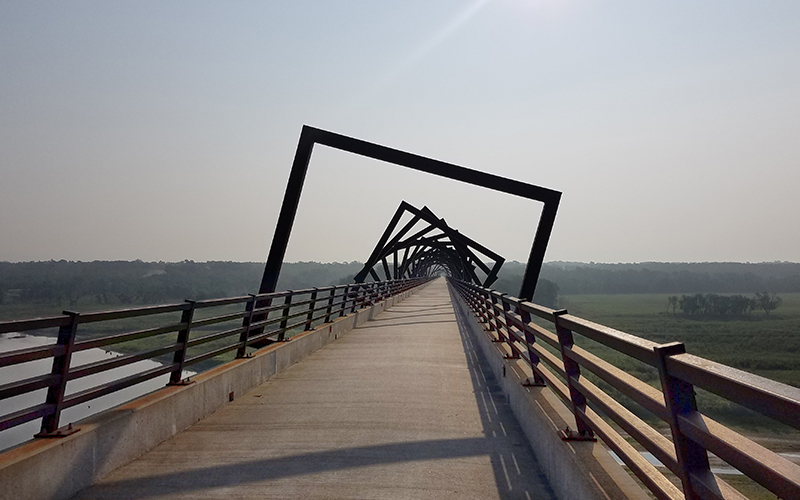 Editor’s note: This is the newest report from Shevonne and Pat Travers, Waitsfield, who are biking Seattle to Washington, DC, on the Great American Rail Trail.

“You will never get through the Cowboy Trail in Nebraska with those tires,” said another cyclist we had met back on the Mickelson Trail in SD. “It’s now quicksand because of extensive flooding in 2019.” We were extremely disappointed as we had been focused on cycling multiple miles on the Cowboy Trail. Resourceful as we have become, we punted, rented a 10-foot U-Haul truck in Chadron, drove through the Sand Hills and dropped the truck off in Lincoln. After a night’s rest, we were back on the Great American Rail Trail, destination Omaha.

We headed east on the MoPac Trail (the old Missouri Pacific Railroad) through Lincoln, stopping for lunch minutes before a thunderous washout kept us from moving forward. We ended up in South Bend, at a brand-new campground, called the Omaha Campsite, complete with a horse, several goats, chickens and a Great Pyrenees. The owner, Corey Price, was thrilled to have us as his first paying customers. “I am going to frame this $20 bill and hang it on the wall,” he said. And, after a somewhat soggy night, Corey showed up in his golf cart the next morning with a thermos of coffee and some goat’s milk soap.

Heading towards Omaha from Corey’s, we crossed the recently renovated Lied Bridge over the Platte River before the real fun began. Having dismissed the idea that even though two days earlier Omaha had sustained severe thunderstorms, 95-mile an hour winds and that 200,000 homes were without power, we would be able to cycle right into the city we discovered that was too optimistic. The trails were covered with downed trees, requiring plenty of bicycle carries and debris removal. Upon our very late arrival, we were welcomed to Omaha by Christopher Schmidt, our second “Warm Showers” host on this trip. He rolled out the red carpet, making us a scrumptious dinner and shared plenty of cycling stories.

Monday morning, we found our way to Council Bluff, IA, crossing the Missouri River on the impressive Bob Kerrey Pedestrian Bridge. You may have noticed my fascination with bridges. That’s because I majored in civil engineering. In the middle of the bridge, we crossed into Iowa, my first time ever in this state. Being from the East Coast, my stereotypical image of Iowa is that it is flat.

IOWA IS NOT FLAT

Monday’s journey solidified that as we made our way some 30 miles over flat terrain to Underwood. And then we turned right onto the Magnolia Road. Oops, big hill staring at us! Since it was already 4 o’clock in the afternoon, and there was a truck stop motel in front of us, we opted to bag the last 20 miles we had planned and rented a room.

Tuesday, we rode over 40 miles from Underwood to Lorah. The trip featured hill, after hill, after hill. Iowa is not flat! This area undulates up and down like a sine wave. Along the way, we passed through towns that were established when the Rock Island railroad was built. And then there was Walnut, a town of 745 people, whose main street is lined with numerous antique shops and pretty much nothing else.

When we arrived in Lorah yesterday, after a significantly challenging day on relentless Iowa hills and gravel roads, my rear tire had a psi of 27. And a few hours later, it was down to 8 psi. Obviously, it was time to face the music and replace the tube.

The rest of the day’s trip tested our mojo. As we got closer to our planned destination in Guthrie Center, we checked on the weather and learned that 30 counties in Iowa were under a tornado watch. Rather than camp, we found a room at the Mid-Town Motel.

ONE FOR THE BOOKS

Thursday’s ride was one for the books. After negotiating truck traffic and sand-strewn shoulders for 7 miles, we arrived in the town of Panora. While having some iced coffees, we struck up a conversation with two former teachers and a local farmer (who has a 1,000-acre farm). I am learning that a 1,000 acres is about what one needs to make it and that the corn and soybeans are processed and travel throughout the world.

From Panora, we found our way to the paved Raccoon River Valley Trail (in total this trail is 89 miles in length) to Perry and eventually to dinner and camping at the Whistling Donkey restaurant and campground in Woodward. Best of all, it’s finally much flatter but I recognize this may be short-lived when we head further north.

THE HEART OF IOWA

Over the past six days we have cycled some 250 miles in Iowa and experienced all kinds of extremes including the terrain and the trails. Iowa takes bicycling seriously (it is the birthplace of the annual RAGBRAI, the Register’s Annual Great Bicycle Ride Across Iowa), and the state has invested heavily in creating some very fine trails.

Most of the trails we have traveled have been paved, unlike almost every other state, but during our ride from Woodward, we began on a lovely concrete trail which turned to crushed limestone which turned into a grassy trail with a foot path.

And then there are the roads. We have thoroughly enjoyed some beautiful paved roads, where we have made good time and also suffered through some miserable gravel roads where the loose stone has forced us to unclip our shoes and, in some cases, forced a dismounting from our bicycles. Unlike the gravel roads in other states, where small stone is spread over the road surface, Iowa spreads 1-inch-diameter stone, which is problematic for bicycles.

We cycled on the High Trestle Trail, the Heart of Iowa Nature Trail, the 30/330 Trail and the Linn Creek Trail, all of which are on the Great American Rail Trail. The main attraction of the High Trestle Trail is a 13-story-high bridge that traverses the Des Moines River just east of Woodward. This trestle is the icon of Iowa’s bicycle trail system. Originally built by the Union Pacific Railroad, when they moved their tracks further north, they pulled the trestle, leaving the piers but no way across the river. After years of raising funds and state appropriations, the $15 million-dollar trestle opened. The trestle pays specific tribute to Des Moines coal miners, as the sculptures within the bridge represent the tunnels coal miners traveled through and the blue lights which appear at nightfall represent the coal miners’ lights.

Yesterday, we traveled 65 miles from Woodward to Marshalltown, a city of 27,000 people. It was a darn good thing that our legs held up as there was virtually nothing for services between those two towns.

And then planning on a short 25-mile ride to Wolf Creek Recreation Area, things changed. As we were studying our Iowa map, to make sure we were following paved roads, a friendly couple stopped their car to ask if we needed help.

They informed us that the Wolf Creek Recreation Area was located on a gravel road, and if we wanted to head north on a paved road, we needed to go to Gladbrook. We looked at each other and agreed “not another damned gravel road.” Gladbrook certainly seemed pleasant and welcoming with large maple and oak trees lining the streets. We decided to gamble and try and find a place to set up our tent. Shevonne set off on foot to scope out the local town park and eventually ran into Sheila Lundt, who was working in her front yard. Sheila attempted to find out whether camping is allowed in the park and when there wasn’t really a solid answer, she graciously offered us her back yard.

Stopping in Gladbrook turned out to be an unexpected blessing in disguise. Once again, we bumped into the same couple who had directed us toward paved roads earlier and they suggested we walk to the local 4-H fair which we did. And unbelievably we discovered Matchstick Marvels, an exhibition featuring models built completely out of matchsticks. Pat Acton has been creating replicas of the Iowa governor’s mansion, the U.S. Capitol, Notre Dame de Paris, spaceships, Navy ships and several animals for over 40 years. A former career counselor, many of his creations are now part of the Ripley Believe It or Not Museums.