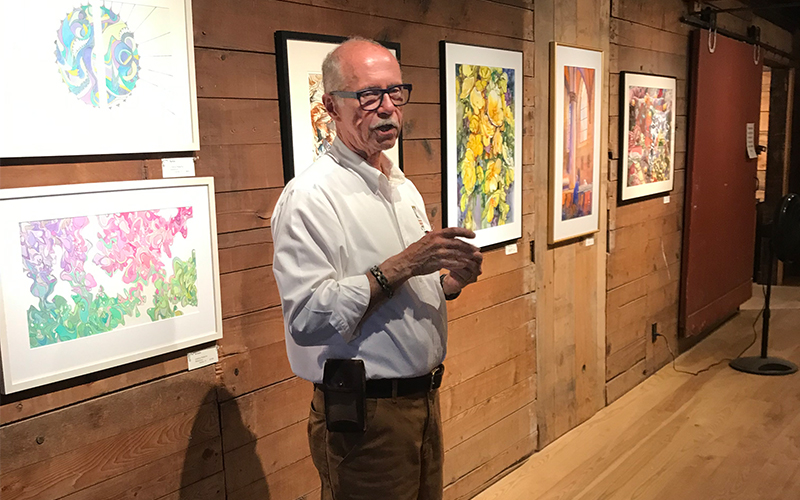 On Sunday, July 18, art lovers attended the Celebration of the Return of the Arts at the Red Barn Galleries at Lareau Farm in Waitsfield. Attendees perused the ninth annual Green Mountain Watercolor Exhibition while snacking on American Flatbread. The exhibit was curated by Warren painter Gary Eckhart and judged by Tim Saternow of Newark, NJ.

The exhibit features 96 paintings from Vermont artists, as well as painters from throughout the country. Eckhart said that two Canadian painters tried to enter but were unable to get their paintings across the border, so they’ll be featured in next year’s show. When the exhibition began, there were only eight Vermont artists shown, but Eckhart says word spread and the competition received 140 submissions this year. “Every year, the quality of the work gets higher,” he said.

Vermont painters Lisa Forster Beach, Stowe; Annelein Beukenkamp, Burlington; and Robert O’Brien, Perkinsville, served as jurors of acceptance, voting independently on each submission. Eckhart then tallied the votes and added a few of his own selections from the paintings not chosen in order to fill some gaps in categories and styles.

This year, $7,200 in awards were given by businesses, organizations and individual donors, with every cent going directly to the selected artists. Waitsfield painter Harriet King took home the Doreen Elizabeth Stagliano Award ($250), donated by Lincoln Mountain Storage, for her expressive painting, “Blue Inspiration.” Many of the artists whose work was included have had work selected for the competition for several years.

During the celebration, Eckhart led an hour-long walk-through of the exhibit, showing gallery-goers the techniques used in the winning paintings and answering questions about style and composition. Many of the paintings on display depicted rural and natural scenes, landscapes and still lives. Eckhart pointed out various techniques and trends, such as the use of synthetic paints and paper, as well as the method of using cold wax to preserve paintings and one artist’s use of poured paints in favor of brushes.

Also, on display were several local artists’ work, including Eckhart’s own paintings, which he calls “representational,” depicting still lives and somber rural scenes.

“We didn’t know how the show would go this year” following the pandemic, Eckhart said, but he was surprised to receive so many strong submissions. Typically, the show includes about 75 paintings, but the jurors felt there was so much high-quality work that they expanded to include 96 paintings for the competition.

“There’s so much talent in The Valley,” local resident Chuck Thibault said, “I look forward to these events.”

The Green Mountain Watercolor Exhibition is open to the public at the Red Barn Galleries at Lareau Farm from June 20 to July 24 (Thursday and Friday, 4-9 p.m., Saturday and Sunday, noon to 9 p.m.). Admission is free.