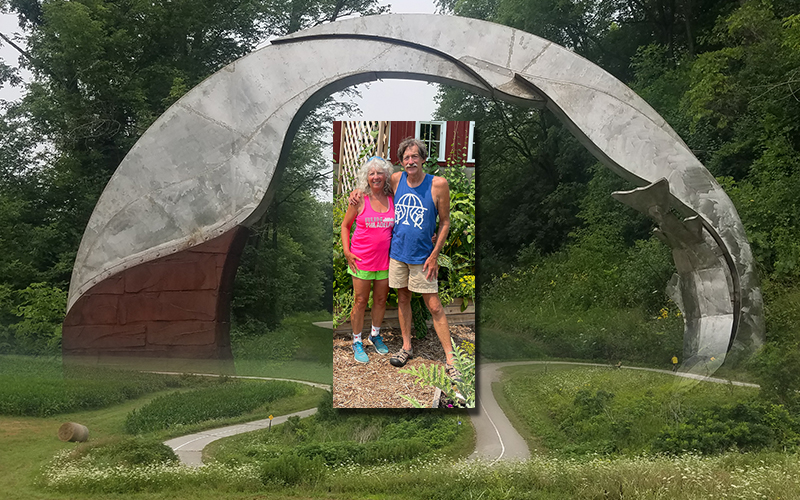 It was mid-morning last Sunday when we stopped on our way north from Gladbook at a picnic shelter on the Pioneer Trail. There were two people sitting together and chatting at one of the other tables who unbeknownst to us were holding their quarterly meeting of the Central Iowa’s Dowsers Association. This did not truly become evident until I witnessed a gentleman swinging a pendulum over a set of cards and asked: “What are you doing?” Thus, ensued a brief conversation that touched on Reiki and long-distance healing energy.

Our next stop was in Hudson, whose main street screamed block party aftermath. It was time for our daily dose of a sugar-sweetened beverage.

On our way once again, we cycled along the Sergeant Road Trail to the outskirts of Waterloo, then the Cedar Prairie Trail into downtown Cedar Falls, then across the Cedar River to North Cedar, the home of Warm Showers hosts, Randy and Laura Hashman. They made us feel at home, offering a variety of beverages and appetizers while we relaxed and conversed in their back yard.

“Our daughter, Linden, and her partner, Jake, convinced us that we should be Warm Showers hosts,” Laura said. Linden and Jake were the recipient of many Warm Showers hosts during their cycling adventure, which began in Prudhoe Bay, Alaska, and towing along their 55-pound dog. Their originally intended destination was Argentina, but the trip was cut short in Baja, California, because of the pandemic. Linden, Jake and Jane, Laura’s mom, joined us for a fabulous dinner of rib eyes, sweet corn, potatoes and cucumbers and plenty of laughter.

After Randy’s and Laura’s gracious hospitality, it was difficult to leave the next morning. Corey, my son, who lives in Decorah with his partner, Kyra, called proposing he pick us up in Sumner, Iowa. We agreed as we wanted to spend more time with them rather than another night in a tiny tent someplace. Forty miles later, after sharing some chips and a soda and some fruit from a small general store, we converged in one of Sumner’s local parks.

The last two times I have been in Decorah they were overnight visits; first during RAGBRAI (Register's Annual Great Bicycle Ride Across Iowa) in 1993 and then once again after RAGBRAI in 2012. Corey and Kyra live a few blocks from town with three cats who have the run of the neighborhood. We have been impressed with Decorah’s topography, parks and trails and how happy and relaxed everyone seems. Corey cycled the 11-mile Trout Run trail with us one morning, which took us along the river to the hatchery and then up and over several good hills.

We have made repairs and substitutions to our gear to prepare for the rest of our journey east. We’ve checked out the Toppling Goliath brewery, the Seed Saver’s property and learned much about how the Norwegians came to settle in the U.S. by spending a morning at the Vesterheim Museum. We are presently partaking of Decorah’s annual Nordic Festival that is full of new foods, music and Nordic dancing. Tomorrow morning, we are back on the trails through a section of southeastern Minnesota.

CALLING OUR BLUFF IN BLUFF COUNTRY

Back on our bicycles once again, we began in Harmony, Minnesota, just over the Iowa border. I had mapped out the perfect day – 53 miles of paved trail to Houston, Minnesota. The trail winds along the South Branch and Main Branch of the Root River through beautiful scenery and quaint small towns, that by and large have espoused the river and the bicycle trail. There are lots of businesses catering to cyclists, rafters and anglers. Lanesboro is a quaint old railroad town and Whalen offers a pie shop with 25 varieties of pie. Cycling on the Root River Trail also marked our reunification with the old grade of the former Milwaukee Road rail line which was where we began our journey in Washington state.

We set up camp at the Houston Nature Center, which is exclusively for walk-in camping. Though we were forewarned that it was the annual “Hoedown” weekend and that bands would be playing right next door to the campsite at the fairgrounds until 1 a.m. we didn’t pay it much heed. What we didn’t know was that there would be a tractor pull, followed by a truck pull at the fairgrounds that lasted for four hours, throwing billows of black smoke into the air and driving us asunder with all of the engine revving.

At 7 a.m. on Sunday, we were the first guests at the Houston Lion’s Club annual gravy and biscuit breakfast. Though we didn’t realize it at the time, this would be the day’s highlight.  Before leaving Houston, I discovered my rear tire was shredded. Fortunately, I had just purchased two replacement tires in Decorah – one for my bicycle and one for Shevonne’s. What I presumed would be a quick fix turned into a two-hour workout that included destroying two inner tubes as well. Thankfully, a bicycle repair guru finally appeared on the scene and with our last tube, he was able to get the tire back on successfully.

Wheel back on the bicycle, I then discovered my front tire was about to blow. Without another tire that fit my bicycle and without a local bicycle shop we were a bit stuck. Miraculously, Dan and Faith appeared and offered to give us a ride into Lacrosse. We met Dan and Faith earlier that morning when attempting to repair the tire and they were now back after their 26-mile ride. “We believe in karma,” said Dan as he loaded our bicycles on the back of his pick-up truck.

After driving past multiple closed bicycle shops, we gave up and rented a hotel room for the night. We checked out the Mississippi River and the bridge we planned to ride over the river. Tomorrow we’ll visit a bike shop to have them inspect all of our tires and perform any other tuning up as needed. Hopefully, by tomorrow, we’ll be heading eastward again, along the former Milwaukee Road with our eyes on Madison.