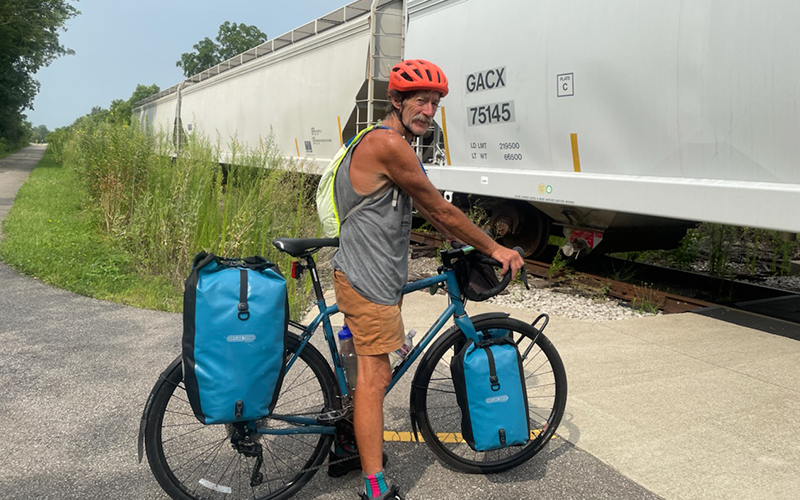 Traverses continue eastward through Ohio and into West Virginia

Our travels through Ohio have been relatively easy – paved, flat trails and lots of towns with soda fountains. As we cycled through Xenia, we discovered it is known as a bicycle hub because five trails converge in the town. And after another 30 miles on the trail, we arrived in London, OH, and the primitive campsite right next to the Ohio to Erie Trail.

Of course, the unexpected occurred during the ride the next day. First, we had to deal with a train full of hopper cars that kept moving forward and backward blocking all the cycling crossings. And then, when attempting to put my bicycle in gear to get up a hill, it faltered. Time to visit another bicycle repair shop, this time in the Short North area of Columbus, Ohio.

This time the diagnosis was that I needed a new derailleur. However, the bicycle mechanic told me that there would be no way to get one because they stopped manufacturing the type on my bicycle during the pandemic. He did a bit of tweaking, showing me how I might deal with it should it reoccur

Back on the Ohio to Erie Trail, we maneuvered through the Columbus outskirts and picked up the Alum Creek Trail, a pleasant trail with winding paths and lots of bridges. We arrived in Westerville, thirsty but undecided about taking a break because the skies promised a storm coming soon. The irresistible afternoon Dr. Pepper won out, because of which we didn’t make it to our Warm Showers location before the torrential thunderstorm touched down. A gentleman motioned us into his home and we stayed for the next hour.

When the Ohio to Erie Trail ended in the town of Glenmont, we had two choices; turn left and follow the river valley to the Turkey Hollow Campground in Millersburg or turn right and climb straight up an enormous hill. According to Pat, left was our intended direction and I breathed a sigh of relief. A few miles out of town, however, a “Road Closed” sign appeared in front of us.

We have had our share of disagreements about how to handle those signs and this time, we both decided to ignore it. That is, until the Ohio Department of Transportation personnel in their trucks told us we could not go further because of the tree that fell from the forest and knocked down the power lines with it.

“We don’t know when they will get around to shutting down the power so we can cut the tree,” one of the guys said.  “It may not happen until tomorrow. “You will need to cycle back into town and cycle up that big hill and then travel about 4 or 5 miles more and come back down on the other side of the road,” he said.

Grimacing, Pat and I turned around and cycled back to the hill to begin what seemed arduous after several days on flatter terrain. My bicycle screamed out in pain, refusing to change gears and forcing a hot walk up the hill. I wanted to chuck this bicycle in the woods for good!

At the top of the hill, I was hysterical as I saw no way forward to finish the adventure without another bicycle. We called our friend, Tom, from Illinois – after all he had gotten us out of the last jam – maybe he would have an easy solution. While we were on the phone with Tom, a gentleman in a small pickup truck came by and offered to take us to a bicycle repair shop. His truck was packed with a couch and cushions. “Give me a half an hour and I will be back”, he said.

True to his word, in about 30 minutes the gentleman, named Rick, with the pickup (named Elinor) reappeared. I was on the fence about having him take us to a shop and Rick could sense my apprehension. “You can drive the truck if you’d like,” he said. We put our bicycles in the back of the pickup and headed for a repair shop.

“Elinor will get us there safely,” said Rick as the three of us crammed into a two-person pickup truck. “I don’t like to go very fast on these back roads.” While Pat shouted out the Google directions to the bicycle shop, Rick drove and told us we were now in the midst of Amish country.

Fifteen miles later, we pulled up to the Hiland Bicycle Shop, owned by Leroy and Cinda Yoder. Leroy and Cinda are Amish and Leroy has been selling and repairing bicycles for several years. His shop and the bicycles keep multiplying and now he has a new warehouse behind the shop which is stuffed with electric assist bicycles and lots of bicycle parts. Most of the people he serves live no more than 10 miles away as members of the Amish and Mennonite communities use bicycles as their means of transportation. “Your cassette is all chewed up,” Leroy said. “I don’t have one that is the same but I can replace it with another, though it won’t be that easy to get up steep hills.”

Desperate and knowing we had a few more days before we were back on rail trails, I agreed to have him replace it and 10 minutes later I was testing it. It was now about 4:30 p.m. on Friday evening. Pat and I needed a place to camp and some food. Rick asked Leroy if there was a place we could camp on his property. Leroy indicated that we could do so, either on his son’s property behind the shop or on his property across the road. “There’s also a place to get food about a mile and a half from here,” he said. “And if you would like, you can sleep in the shop’s warehouse tonight.” Knowing thunderstorms were brewing, we agreed to stay in the warehouse and stashed everything there. Once more, Rick took us in Elinor to the market and returned us to the Hiland Bicycle Shop. Rick seemed thrilled to have been able to help us and he left us in good hands.

As we began talking, Leroy said he had a question. “How did you happen to come to us today? And Pat answered with the following “It all began when a tree fell from the forest and blocked the road.”

And we all laughed.

We are incredibly thankful for the unexpected gifts that arrived on this fine day.

Here’s a link to their website: (blog is linked at top) https://twoslowpokesonspokes.com.