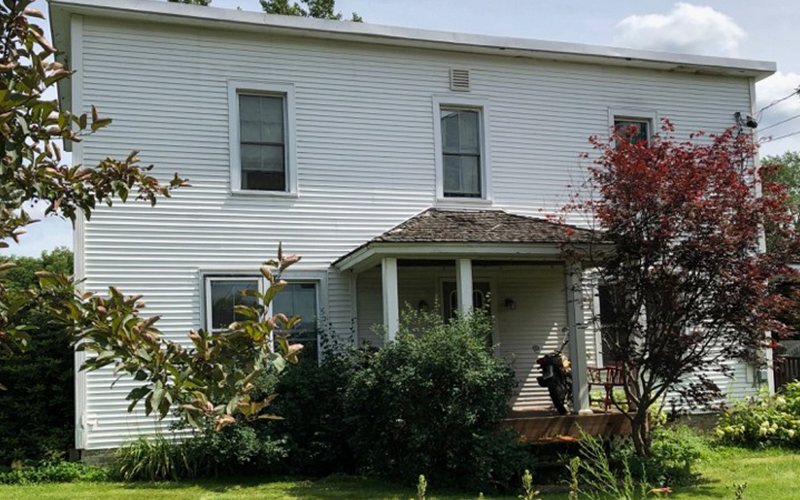 I was just heading out the door when my phone rang. The caller didn’t even say hello. She just started talking, so I could tell she was excited. It was my friend Brooke Cunningham. “I was just thinking about someone you should consider for an article. Her name was Thelma Ricketts.”

Thelma. The name evoked a strong image of a country girl from days gone by. I put my car keys down on the counter and started scrambling around to find something to write on.

“She lived on a farm out near the East Warren Community Market. When Bradley (Brooke’s son) was little, we used to buy eggs from her. In the 80s she was easily in her 80s. Picking up the eggs from her chickens out in the barn wasn’t easy for her anymore. Bradley loved to do it, so she would let him gather the eggs we were going to buy, himself, and I sat in her kitchen talking to her. A really interesting woman.” Brooke was right about Thelma’s age. A census report I found said Thelma was born in 1901.

I put out a post on online to ask for memories of her. In one response, a friend asked me to call Dave Sellers who, as a young architect, convinced a group of like-minded young people to use an improvisational approach to building on Prickly Mountain. He said, “I don’t know why but she loved us. She loved that we were out working hard all day. Once or twice a week she would make us a big dinner and only charge us $1.50 each.”

Mary Laulis wrote that Thelma was her best friend and mentor when she first came to The Valley in the 80s. She called her, “A great Vermonter and lady.” Pamela Rickard said, “My mother, Carol Lippincott, would by eggs from Thelma, (beginning 1970) to sell at our store -- The Warren Store. We would drive up to her house and it always took a while because she had so many good stories to tell.”

It’s so fun how many people are willing to share their stories. Here’s another one that came in by email:

Sure, we remember Thelma (it`s Craig Keown here). In 1979, two Aussie girls were traveling around the world. They had taken a steamer to Singapore from Perth, then flew to Europe and spent a whole summer on a bus tour from the Balkans to France, then onto the UK. They then sought employment in Scotland for the winter, working in hotels.” He’s talking about his wife Kerry Keown. “Kerry was a bartender in a pub. While there, they made arrangements to work as au pairs for wealthy families in Montreal (they could work in all the British countries). Eighteen months later and after a summer of camping around the U.S., they were on their way from Montreal through Vermont. They stayed at Thelma`s Hostel (part of the Youth Hostel Association) on the East Warren Common Road. My brother was living nearby with Clyde Ricketts, and he picked the girls up while they were hitchhiking to shop at Mehuron`s Market.

I met the girls a week later. My youngest daughter, Laura, had died of leukemia the week before and I had lost everything I owned living in the hospital with her for nine months, unable to work. At the end of November 1979, I walked into the High and Dry (now Localfolk Smokehouse) at noon, where I used to tend bar, looking for coffee. The two girls were having a glass of wine and chatting with Chase, the bartender. They asked me if I had a brother who resembled me. I ended up driving them to Montpelier for their first American movie, "Animal House," and then on to see a couple of sets by John Gailmor.  Afterwards, I took them back to Thelma`s, admitting to having a good time for the first time in nine months.  It was November 26, 1979.

My birthday was Thanksgiving, November 28, and my car was going to be repossessed on Friday, November 29. On Thanksgiving, I was contemplating how I was going to come up with the rent and there was a knock at the door. It was the two girls with shopping bags full of Thanksgiving/birthday dinner! They knew my problems by then and thought to cheer me up. My life had turned around. It finally snowed. I went back to work at the mountain, the girls found work at the Swiss Pot Restaurant in Stowe, and a light lit up at the end of the long, dark tunnel that I had been living in.

That was more than 40 years ago, and I like to think that Thelma and her hostel had a lot to do with it. I am still friendly with Thelma`s family, and, I have been married to Kerry for 40 years and my brother has been married to Leanne for 39. Thank God that Thelma gave those two Aussie girls a place to stay here in The Valley.”

Kerry added: "Thelma took us in late on a rainy evening after a very long day and gave us a small taste of home away from home. We stayed with her for several weeks and helped with odd chores around the hostel in exchange for homemade treats. One of our chores was to help her decorate three doll houses. I still think of her every time I drive by that house and marvel at our humble beginnings, here in The Valley."