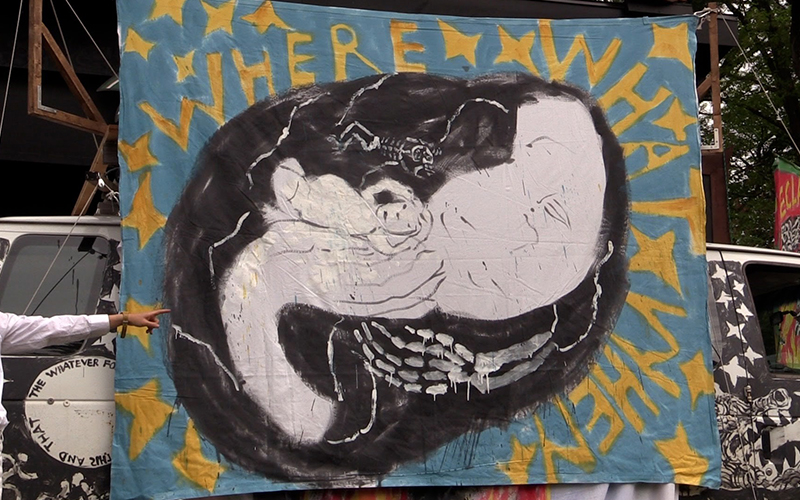 On Saturday, September 25, Bob Wolk, (Banjo Bob) joins Bread and Puppet at Camp Meade in Middlesex for an afternoon and early evening double-header. Gates open at 3 p.m. for the event. Wolk will be performing on the green while people are perusing two exhibits, checking out a Cheap Art sale, enjoying Bread and Puppet’s bread and aioli along with libations and refreshments offered at Camp Meade Summer Shack, Red Hen Bakery Café and the Filling Station restaurant.

In addition to a performance of Schumann’s Bedsheet Cantastoria, this exhibit features his recent paintings in honor of the life of the late Elka Schumann, whose personal and artistic partnership with her husband was a guiding force of Bread and Puppet Theater for over 60 years.

Banjo Bob’s New Migration Sideshow -- American Success Story features mannequins attired in the clothing abandoned by immigrants that he finds in Arizona where he lives 1.5 miles from the border.

“When he was describing this show to me, he said he goes out and walks around in the desert and finds clothes that immigrants left behind. He starts his show, making a joke about immigrant fashions and style, but in the end, people cry when they realize that these people died, faceless and unknown,” explained Russ Bennett, one of the partners in Planetary Matters which owns Camp Meade.

“He played this as part of several Bread and Puppet events this summer and people found it very moving,” Bennett added.

Bread and Puppet’s themes about social justice are a good match for the philosophy of Bennett, Alan Newman and Mike Pelchar, the three owners of Planetary Matters which owns Camp Meade. “Their work always touches on the broader societal and topical currents in our society. . . is always relevant and offers an excellent perspective on where we are and where we might go,” Bennett explained.

He said he and his partners are striving to build community at Camp Meade, to provide a privately-owned public space for gathering, for theater, for music, for food and for fellowship and more. Our core values align,” Bennett said of Bread and Puppet. “We’re about strengthening community and supporting businesses that are creating products in ways that respect the planet and each other.”

The show runs until 6 p.m. Admission is by donation. Those interested in volunteering to be in the show or help out with the exhibit should contact Alexis Smith: This email address is being protected from spambots. You need JavaScript enabled to view it.