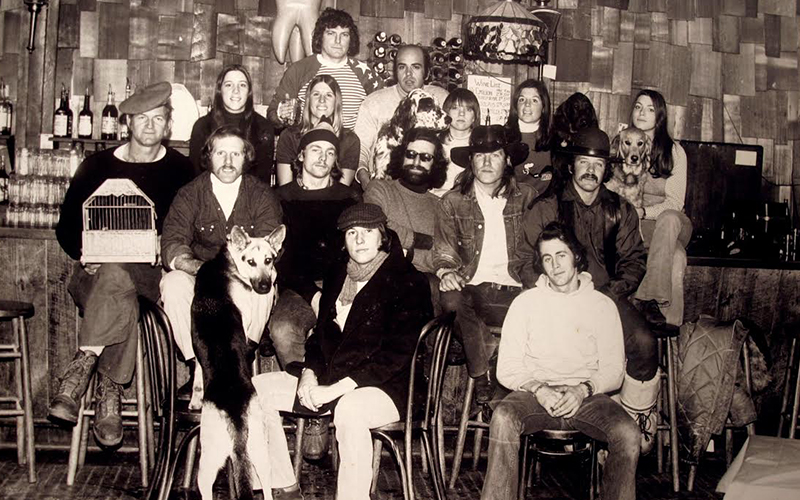 World War II ended in 1945 and soldiers flooded home to America hoping for a peaceful life. Their parents had already survived the Great Depression and then suffered the terrible sacrifice of sending their children to war. Conformity became aspirational, as it was believed to provide stability. And stability had been in short supply for a long time. Younger and older alike, for the most part, followed narrowly-held standards. But the generation that followed rebelled against such rules in unprecedented numbers and a social explosion followed.

By 1967, a youth culture devoted to transformational change had formed. They would forever be remembered by the saying, “Drugs, sex and rock’n’roll.”

This article is from the Boston Sunday Globe, published on March 6,1966. That’s local photographer Charlie Brown, 85, of Warren on the right in the photograph smoking a cigar while he dances at the Blue Tooth which was a local bar. He was 28 at the time and going through his own rebellion by moving to the Mad River Valley.

“So maybe I’m an escapist. But I’ve escaped into a kind

of life that’s more real than the one I left behind.”

When Charlie Brown gave up his job as a computer programmer and a salary of close to $10,000 a year, his boss gasped, “Good grief!”

“I’m retiring while I’m still young enough to enjoy the best years of my life,” declared the 28-year-old Charlie that fateful day, back in December of 1964. “A man isn’t a man -- he’s only living by rote -- if he doesn’t do what he really wants to do.”

With that Charlie Brown packed, left his native Philadelphia and a promising executive career behind him, headed for the snow and did what he really wanted to do.

He became a ski bum in the Sugarbush Valley. And he joined the adventurous, convivial, intelligent company of young men and women -- mostly unencumbered by marital or other grave responsibilities -- who flock north, when the first snow flies, like perverse migratory birds.

Thousands of ski bums like Charlie Brown work all over New England at Alpine-style inns, modest lodges, night spots and restaurants. They wait on tables, tend bar, wash dishes, make beds, do office chores. They earn nominal salaries and, sometimes, their room and board.

Their ranks include people from many walks of life -- nurses, teachers, students, salesmen, artists and “resting” actors. But they all have one common denominator: they are enslaved by the siren-song of skiing.

Charlie Brown, now 30, is the uncrowned king of Sugarbush ski bums. Handsomely tanned, suave and smiling, he is a contented young man -- the antithesis of his worry-wort namesake of comic strip fame.

Holder of a business administration degree from Temple University, he delights in his two new jobs -- waiter at a rock’n’roll, après ski place called “The Blue Tooth, “and part-time disc jockey at “The Ludwig” discotheque, operated by band leader Skitch Henderson. It was a disco [Author’s note: Skitch Henderson was a famous musician, composer and band leader from the 30s to the late 6-s. Notably on The Late Show and Ed Sullivan Show. He created a disco for the "mascara mountain" crowd. More on them in another article.]

Back to the  Globe:

But Charlie Brown is a swinger who thinks. He has carefully assessed the factors that motivated him to be a ski bum. Raising his voice above the din of the thunderous combo at “The Tooth” he explained:

“So maybe I am an escapist. But I’ve escaped to a way of life that’s more real than the one I left.

“The people I work with up here are more direct about their feelings and about what they want out of life. The married guys back in the city, working 9-to-5 humdrum jobs, are the real escapists. They are hiding from themselves and not doing what they want to do.”

Other ski bums in Charlie Brown’s domain expressed themselves less poetically, but their motivation was basically the same as Charlie’s: They came to ski country to break with routine and to enjoy life more.

Charlie did make one attempt go back to being an executive.

“So returning to the corporate world, I sat in a vice president’s office of Revlon Corporation, where the VP in charge of personnel posed the question, ‘What will you be thinking about when the snow starts falling in December?’ I looked at him and stared out the window "The words came tumbling out of my mouth as I reached out to shake his hand. "Thank you for the consideration, but I will be skiing in December. Best decision I ever made in my life!” he said.