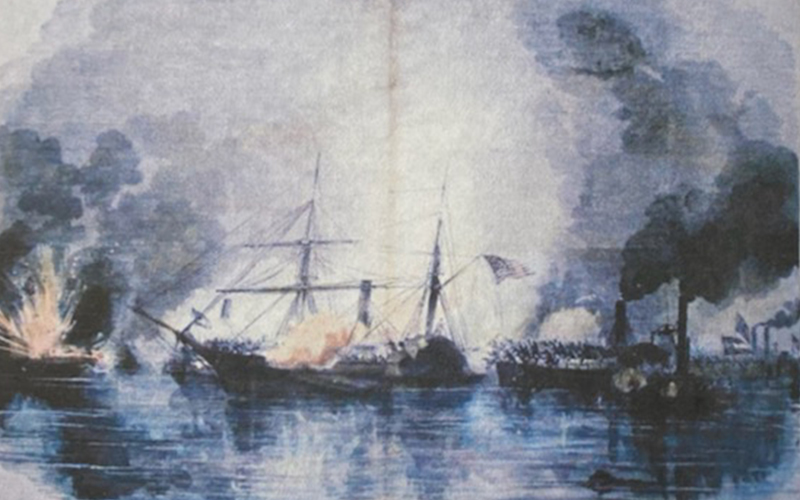 Would it surprise you to know that Waitsfield men traveled as far from home as Galveston Island, Texas, to serve the Union cause during the American Civil War? I made Galveston my “turn around” point on a 53-day, 8,000-mile driving trip this summer because the primary purpose of my travel was to visit all the places I had not previously visited where Waitsfield soldiers served during the war.

This trip was long in the planning. It was to have occurred in March of 2020 but, with the car packed in expectation of spending about a month on the road principally in the Gulf states, my plans changed when COVID-19 led to a shutdown of national parks and battlefields. Hotel and motel chains, restaurants and museums were impacted as well. The very next day I lugged back inside the house all the packed boxes, including one full of Civil War battlefield guidebooks and audiotapes and another filled with AAA maps and folders organized by states which contained notes made over the previous year of specific places I wanted to go. Those boxes sat on the bedroom floor until the end of June 2021.

I knew this was a poor time of the year to visit the Deep South because of expected high temperatures and humidity. And, of course, many of the states I intended to visit were experiencing low vaccination rates and high positivity and hospitalization rates. That situation was exacerbated by the emerging COVID Delta variant.  But I had reached a point in writing my book about Waitsfield’s Civil War soldiers and sailors when a long break away from the computer was called for. I was fully vaccinated and was prepared to mask up and avoid people to a great extent. Also, I had completed a refinancing of my home that allowed purchase of a larger, more comfortable vehicle for the trip. (This one had air conditioning, unlike its predecessor.)

I’d already modified my travel plans to exclude Florida, where a Vermont regiment was stationed at Pensacola at one time during the war. Furthermore, my new plan included making brief visits to a few battlefields I previously have toured multiple times. This time, however, I would focus on just those parts of the battlefields where Waitsfield men were engaged.

The places I visited in the weeks after I left Galveston will be the focus of future essays and will include the names of Waitsfield men known to have been at particular battlefields. The present essay describes the first half of my Civil War trip, up to and including Galveston Island.

As it happened, in the early weeks of this long trip I also visited family members whom I’d not seen in almost two years. Deducting the days spent with family in Avon Lake and Columbus, Ohio, and later in Emporia, Kansas, I spent 36 days on the road.  Here are some highlights from the first part of the trip.

In a rented cottage in this summer resort, Ulysses Simpson Grant spent his final five weeks of life completing his memoirs, a project suggested by his friend Mark Twain who undertook to publish them. They’re gems of clear expository writing. Remarkably, Grant wrote daily even while in constant pain from throat cancer.

The remains of 2,260 Confederate prisoners of war are buried at Camp Chase in Columbus. This federal training and staging camp opened early in 1861; it readied some 150,000 Ohio men to enter the Union army. Most Confederate prisoners who were held here were parolees from Fort Donelson, Tennessee. Men from TN, MS, AL and GA infantry and cavalry units are buried here, some two to a grave.

The birthplace and childhood residences of U.S. Grant, these humble homes on the Ohio River are open to the public, as is the one-room schoolhouse Grant attended before he entered West Point Military Academy. Nearby sites associated with Ohio’s Underground Railroad network include the home of John Mercer Langston, a free man of color who raised and sent to Kenyon College eight children. He and his children led lives of public service.

Weeks later in my travels I encountered a tribute to Langston erected in 1996 by the Commonwealth of Virginia on the grounds of the Louisa, Virginia, County courthouse. (During the Civil War, the village of Louisa was named Louisa Court House. A major cavalry battle occurred some 5 miles outside the town at Trevilian Station.)

Seeing Grant’s birth-and-death places completed my decades-long effort to visit every place Grant ever had lived.

Similarly, after visiting Abraham Lincoln’s boyhood home in Indiana, I now had been everywhere Lincoln had lived. The Lincoln Boyhood Home Memorial in Lincoln State Park was created as a gift to the nation from the citizens of Indiana. It commemorates 14 years of Lincoln’s life, (ages 7-21), the longest period he lived in one place. Sculptured panels outside feature excerpts from Lincoln’s most famous addresses.

Murals on the side of several downtown establishments appear to have been a Sesquicentennial project. One memorializes a stop here by the Lincoln Funeral Train on April 30, 1865. Another is a tribute to the Iron Brigade that features an oversized portrait of that brigade’s commander, with a listing of the brigade’s regiments. I assume the officer depicted is Solomon Meredith and wonder if this town was his birthplace.

Also, in Indiana, I toured the remarkable Eiteljorg Museum of American Indians and Western Art in downtown Indianapolis. The range and quality of the Eiteljorg’s permanent exhibits are extraordinary. Those are complemented by special exhibits. I urge readers to view this museum’s holdings online.

Cahokia Mounds, one of only 11 cultural sites in the U.S. that has been designated as a World Heritage site, was not to be missed, given I was traveling in that direction.

The State Capitol and Museum Annex no longer has available to the public its collection of Civil War regimental flags. The Museum’s timeline of the state’s history runs right to the present period, although it was no surprise that the Kansas/Missouri border wars were prominently featured. (Another perspective on that period is offered in a small museum hundreds of miles away, in Lone Jack, Missouri.)

The lovely landscaped grounds of the MO Capitol include tablets engraved with the Ten Commandments, something I found unsettling considering the many court cases that have issued findings against placement of such statues on public lands.

Harry Truman had encouraged the creation of a museum here, the Lone Jack Civil War Battlefield Museum & Soldiers Cemetery. This small museum is focused on the impact of General Order Number 11, issued in August 1863 by Union officer Thomas Ewing Jr. (step-brother to William Tecumseh Sherman), who was serving then as commander of Kansas/Missouri border forces, in retaliation for Quantrill’s raid on Lawrence, Kansas. Ewing’s order resulted in the depopulation of three Missouri counties and part of a fourth county. Not only is the text of Ewing’s order on display, newspapers from the time that reported on that military action are exhibited. Paintings and dioramas depict traumatized women and children being driven from their burning homes. When I questioned that day’s volunteer docent for more information, she obliged by referring me to a 1996 Jackson County Sentinel (newspaper) article.

I didn’t “wander” in this state, as it was my intention to drive straight through OK and TX, north to south, all the way to Galveston. But some observations: Several times I saw gas flares reaching far into the sky. There are many hundreds, if not thousands, of wind turbines in OK -- and those were just the ones I saw on this direct route. At times I noted markers for portions of the former Chisholm Trail, so it seemed only natural to take in the Chisholm Trail Heritage Center in Duncan, OK.

In the Chisholm Trail’s small theater two animatronic cowpokes rest at a campfire after their chuckwagon supper. The younger one is exhilarated by his first year on the trail, singing and “ki-yi-yippee-yippee-yaying” frequently. The older hand recalls years of dust, hard work and poor food before declaring, “But it’s the only life for me.” Overall, I judged this sentimentalized version of life on the trail could hardly be considered history. (As entertainment, it entranced the young children seated next to me.)  The stage lighting had been dimming gradually to suggest the fall of night, with stars beginning to glow in the overhead sky. Before it got too dark for the audience to see our way out, we were ushered into the exhibit hall. This same Heritage Center has a fine art collection, including Remington bronzes, in its Garis Galley.

Further along, I toured two larger museums, both on indigenous reservations: first the Chickasaw Cultural Center in Sulphur, OK; later, the Museum of the Cherokee Indian in Cherokee, NC.

The Chickasaw Center has multiple buildings spaced across a large area. Because of poor planning, I arrived there after many indoor displays had closed for the day, although I walked the grounds.

An overriding impression I formed of rural Oklahoma was its apparent economic dependence on casinos. Much has been written in recent years about the hollowing out of the American Midwest. I saw numerous instances in OK and other states of small towns that once had been prosperous (judging by hotels, railroad stations and architectural gems in their residential areas) but now appear dying. Some of the many closed retail stores may be attributable to COVID-19, but most look as if they shut their doors 15 or more years ago.

There are frequent directional signs on major highways urging travelers to visit “Historic Downtown ___”. The names differed, but what I encountered was always the same, nothing much open but a gas station and a single diner or café. Their few retail establishments offer limited days of operation and usually employ only the owner. There’s almost always a thrift shop (sometimes more than one) in these eviscerated towns and often some brand of “dollar store” on the outskirts.

I reached the Galveston area on July 28. That day I explored the town, including the aptly-named commercial “Strip,” as well as many large homes on Broad Street and side streets suggestive of an extremely prosperous city at some former period. The Henry Rosenberg Public Library seems of that time. It is very large and apparently well-resourced. When I contacted the library’s research department the next day, I was directed to a computer lab and given directions for accessing its newspaper archive, and I spent a morning reading about Vermont’s Seventh Infantry Regiment. That regiment was part of the Army of Observation on the Texas/Mexico border following its service in and around Mobile, Alabama. The regiment arrived at Brazos Santiago, TX, at the beginning of June 1865. It left there for Clarksville, TX, on June 14, remaining there until August 2. From Clarksville it moved to Brownsville. The veterans of the Seventh Regiment were mustered out at Brownsville on March 14, 1866.

Edward A. Burns and Zimri Lathrop were Waitsfield soldiers with Vermont’s Seventh Regiment during its time in Texas. Burns served in Company K; Lathrop, in Company D.

Galveston also figures prominently in Union naval actions of the war.  Waitsfield’s Roderick J. Richardson was Paymaster aboard the Harriet Lane when it was captured off Galveston by sailors of the CS Bayou City on January 1, 1863. The Harriet Lane’s captain was killed and an executive officer and all the crew were taken prisoner before being paroled months later.

Evans lives in Waitsfield. She holds a Ph.D. from the University of Connecticut. Trained in education research, she turned her attention to Vermonters in the Civil War after moving to Vermont in 1995, where she discovered the worldwide community of Civil War Round Tables. Since her 2006 retirement, she has traveled extensively to Civil War battlefields. Evans currently is writing an account of all the men with Waitsfield connections who served in the War.