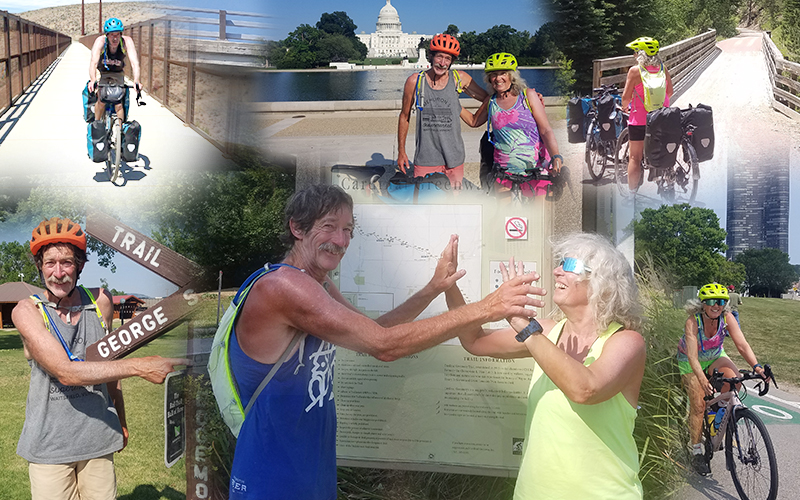 Editor’s Note: This is the final part of a Q and A with Pat and Shevonne Travers who completed a 77-day, 3,500-mile bike ride from Seattle to Washington, DC, late last month, via the Great American Rail Trail.

Pat and Shevonne Travers have had a few weeks to decompress from their 77-day bike trip across the country. When they were interviewed about their trip right after they returned to Vermont, they were still processing it.

VR: You mentioned that the Chicago waterfront was noteworthy, how so?

Pat: The Chicago waterfront was one of the most amazing parts of the trip. There were tens of thousands of people out that day. It was sunny with a gentle breeze, 82 degrees, low humidity. People were swimming, playing volleyball and sailing. and there are two paths, one for bikes and one for pedestrians.

Shevonne: That day my bike was broken and I had to walk my bike over 5 miles so Pat and I were on separate paths.

VR: Do you think you’d do this again or something like this?

Pat: I don’t think we’d cycle across the country again. I think we’ll do weekend tours. I’m sure.

VR: One of the first things you said when I asked what it was like to be back was that it was quiet, absent all the stimulation of your daily efforts to survive, progress and then meeting people, seeing beautiful things, finding trails, problem-solving – might you miss that a little bit?

Pat: We got used to the constant stimulation. There was always something to do.

VR: What was your sense of people’s response to the pandemic as you cycled across the country.

Pat: People were wearing masks in Seattle, and once we left King County, it was a totally different world, like there was no pandemic going on.

Shevonne: We never saw a mask again until Madison, Wisconsin. We also didn’t discuss it or bring it up with people.

Pat: Those discussions did come up a bit when we were staying with Warm Showers hosts.

Shevonne: The Amish don’t take the vaccine and we ended up spending a lot of time with them. I said to them, “Have you not lost anyone?” and the answer was “Yes, we’ve lost plenty of people.” They never wore masks.

VR: After so much bike riding every day, do you feel like you now need six to eight hours a day of exercise?

Shevonne: Yes, in a way, I do. I don’t know what to do about it. I walked the dogs and ran yesterday and will want to get back on my bike when it is fixed.

VR: You mentioned that when you got to DC you were able to meet with Kevin who oversees the Great American Rail Trail system. How’d that go?

Pat: We had a very frank conversation with them about the readiness of the trails that were on the maps.

Shevonne: From the way they’d marketed it, I made the assumption that the trail was done and we could ride from one end of the country to the other. Pat told me that wasn’t true, but I didn’t want to believe it until we were looking for ways through, state by state. When we started in Seattle, we couldn’t find the signs at the beginning.

VR: Anything else people should know?

Shevonne: If anyone else is interested in planning such a trip, we’re happy to talk to them.

Pat: I’ll say it again, the trip restored my faith in humanity.

The Waitsfield couple’s journey has been chronicled in weekly missives printed in The Valley Reporter and also posted on their website (https://twoslowpokesonspokes.com/).