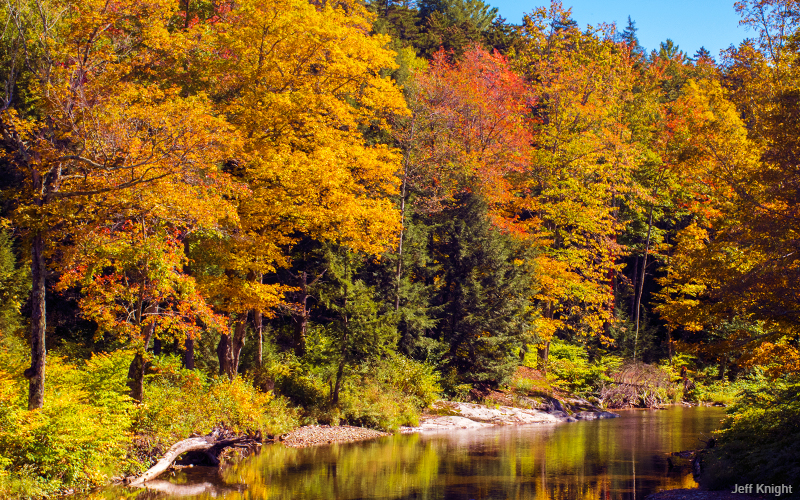 Every autumn, roughly $8 billion is brought into New England for a spectacle many people take for granted: the pops of yellows, reds and oranges that create the brilliant foliage found in The Valley. About $460 million is pumped into Vermont each fall, accounting for 20-35% of the state’s annual tourism income. So, how exactly does this phenomenon of nature work? That’s what eighth graders at Harwood set out to discover.

In science class, they went out among the stock of Harwood’s trees and split into groups. Each one was tasked with covering half a leaf with aluminum foil, then hypothesize what might happen in the coming weeks.

Leaves are the powerhouse system of the tree. Each leaf is full of green chemicals called chlorophyll, whose job is to capture sunlight through photosynthesis and convert carbon dioxide from the air into sugars which preserves the trees. Any excess energy is used to enlarge the tree. Chlorophyll is so crucial that it overpowers every other chemical in the leaf, which is why leaves are so purely green throughout the spring and summer.

A leaf houses other chemicals, too, such as carotenoids. These are pigments that give leaves their yellow, red or orange color. These special pigments are present in the leaf from its first budding, but since the chlorophyll supply is so abundant, they’re covered over by the green.

A change begins to happen when, at the end of the summer, days begin to shorten and the light supply diminishes. To save energy, trees form a barrier at the place where the stem of a leaf meets the tree, called the “abssicion layer.” Extra sugars are trapped on the leaf side of the abssicion layer (some trees, such as red maple, are able to produce anthocyanin, a chemical which interacts with the sugars to promote a much brighter red). As this occurs, the chlorophyll supply starts to die, the leaf’s greens fade and the carotenoids begin to peek through. During what many call “peak foliage,” when the leaves are in their prime, the carotenoids outnumber the chlorophyll. Carotenoids are there all along, but autumn is their time in the spotlight.

While the eighth-graders wait for the results of their aluminum foil experiment – “I think half the leaf will change color, because without light it won’t make chlorophyll,” said one. Each group collected a separate type of leaf, from red maples to American beeches. They placed these in mortars, mashed them into a green pulp and added rubbing alcohol. Through a process called chromatography, a laboratory technique for the separation of a mixture, the carotenoids were uncovered: the red maple mixture became a dazzling scarlet, and the American beech an incandescent yellow.

Eventually, the colorful carotenoids in the leaves will break down, leaving tannins in their place, which are responsible for the dead-brown color. Water running off from a pile of dead leaves that seems muddy is due to the tannins leaching out from the leaf.

The onset and quality of fall foliage varies from season to season depending on various environmental factors, causing the change to occur sooner, later or last longer. A drought in spring and summer may alert the tree to shut down the energy-gathering process early, changing color quicker. Superfluous moisture in the late season means an increase in clouds and less sun, which causes muted colors. Strong winds cause leaves to fall before their peak. Colder temperatures in summer with a profusion of sunlight can prompt vivid colors prematurely, while freezing temperature can kill leaves early. The perfect condition for fall color consists of a moist early season, a drier late summer, and sunny, warm days with cooler nights in the beginning of fall.

Vermont happens to be the “Goldilocks zone” for fall foliage, meaning the conditions are just right. Combining the special ecology of the soil, moisture patterns, beautiful landscape and classic fall weather, these offer the perfect atmosphere for the turning leaves.

As tourists and locals alike admire fall foliage in the coming weeks, they appreciate, as the eighth-graders do, the intrigue, mystery and beauty of this yearly art exhibition.