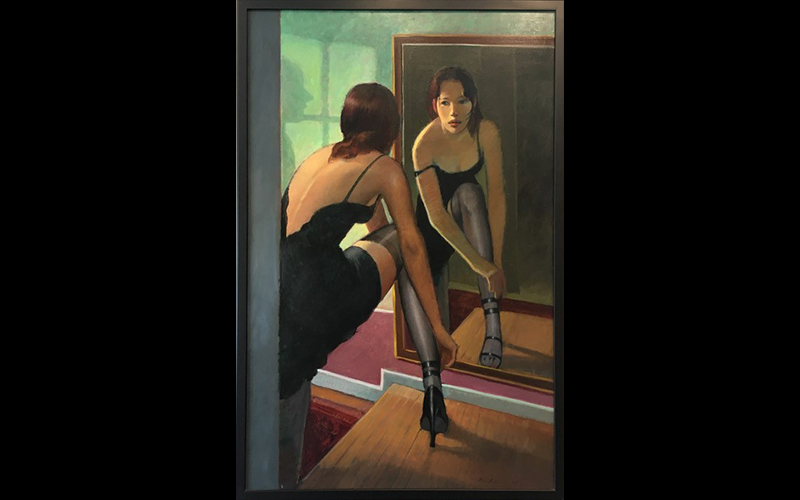 The Bill Brauer Retrospective, currently filling the Festival Galleries at Mad River Valley Arts in Waitsfield, is somewhat unique in its scope and presentation. Retrospectives are generally known for showing the more popular, well-known and completed works of a given artist. The Brauer Retrospective makes no attempt to fit into this mold, showing numerous works that have either been abandoned or are incomplete in their execution; all contributing to the insight and better understanding of the artist himself. All the works are from his estate with many never before publicly shown.

The retrospective features 34 major works in addition to a clever display of his assortment of brushes, palettes and five minor sculptures. Well-documented is his early entry into the arts when he served as a NY Times illustrator for its annual golf publication (1967). Brauer entered the arena of fine arts as a print maker and there are numerous examples of his etchings along with the corresponding metal plates used to create the prints. Of special interest is a series of prints showing the evolution of the aquatint/etching process he frequently used.

The vast majority of work in the retrospective is representative of his figure paintings of the human, mostly female, form. The paintings are very emotional, always evocative of private moments and subliminally suggestive of eroticism. When one views the works there is a definite consciousness that one has stumbled upon a private moment in the life of his subject. This is very evident in “Preceding Image,” a sole female figure adjusting her hose with only the shadow of another figure secreted in the shadows. “Beatrix In the Art Room” is intriguing in the placement of a female head with eyes glancing at the viewer while in the background is a drawing of a nude figure. There is a perception that the viewer is interrupting the model for the nude drawing as she is enjoying a very private moment.

Brauer is most known for two special series of work. The first being his popular poster series of dancers (one on display) and the second of paintings he created for promoting a regional opera festival. The paintings for both “Carmen” and “Don Giovanni” are shown.

Viewing the retrospective one becomes aware of the mastery of the artist. He frequently utilizes a single light source in his paintings creating bold and dynamic shadows which become dramatic abstract patterns playing against the figures. Combining this with his use of frequently vivid complementary colors generates a vibrancy throughout the show. The compactness of the two galleries creates an intimacy with the work that could easily be lost in a larger facility.