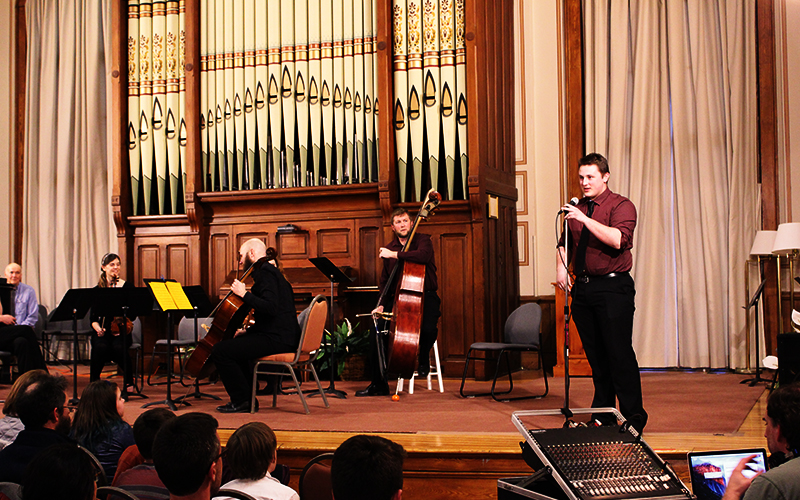 Two resident musicians run Music-COMP, a program started in 1995 that’s based in Duxbury. COMP stands for Music Composition Mentoring Program. Few other programs like this exist in the world, where students from grades three through 12 are matched with a professional composer to guide them in composing their own music.

Selected students see their pieces performed by professional musicians, such as the Vermont Symphony Orchestra, the Vermont Philharmonic, the ARKA String Quartet, and TURNMusic, each year.

“There have been some programs that have sprung up around the country in imitation of Music-COMP. But for many years, we were one of three organizations in the world that did this,” explained Erik Nielsen, senior mentor and president of the music-COMP board

“Every time I describe it, I still kind of get amazed that this is an opportunity that so many of our kids have access to,” said Matt LaRocca, professional composer and the executive director of the Music-COMP.

Since the program is based on remote, online mentoring for students all over Vermont, it fared well during the pandemic. Students continued creating with the help of mentors, but the Opus concert was postponed for this fall. Opus concerts showcase student pieces that are performed by professional musicians. The first one was in 2000.

This July, Stefanie Weigand transitioned from being a chorus teacher at Harwood Union for nine years to director of education at Music-COMP. She works with school teachers to teach them how to compose, so the teachers can then instruct their students.

“Music-COMP kind of has two branches. One of them is mentoring young composers to write new music, and then the other one is professional development for teachers and helping teachers build in their curriculum,” said Weigand.

The summer institute just finished up, which is an accelerated program for teachers to compose a piece.

The program has resources for school teachers to use. There are nearly a dozen free resources on their website, music-comp.org. In cases when teachers don’t have time, resources or training, Music-COMP steps in.

Some 2,500 new works have been composed by students since the beginning of the program, and 50 new student works are performed each year. Music-COMP works with students interested in any genre, including rap, reggae or jazz.

Students hear their own work come to life for the first time in Music-COMP. Weigand recounts one experience with a student at a performance.

“When the musicians started playing his music, he just looked up from his paper score and he had tears in his eyes,” said Weigand.

Wanda Sullivan, a rising senior at Harwood Union High School, got involved with Music-COMP as a first-year. Sullivan’s work has been featured in two Opus concerts, including Opus 34.

Sullivan collaborated with professional musicians during rehearsals to perfect her piece.

“It was like a new leadership role. I was able to make adjustments like tempo and just try new things. And they would offer suggestions and I could be like ‘yeah I like this or no, I don't really like that as much, let's stick to this,’” said Sullivan.

Mentors partner with students to provide feedback on their compositions Professors, working composers, Fulbright scholars and graduates at Julliard have all served as mentors.

Katharina Müller, a Harwood Union senior in 2020, composed Tongues of Fire that world premiered in the Vermont Senate chambers. The Vermont Symphony Orchestra performed the nine-minute song. Müller plans to go to Oberlin for music composition and creative writing.

“She's having her music played by the Vermont Symphony Orchestra and conducted by Jamie Laredo, who is such a famous musician that there's a stadium named after him in Bolivia,” said LaRocca.

Professional composer Nielsen has mentored hundreds of students over the past 18 years with Music-COMP.

With 50 years of experience composing, Nielsen oversees other mentors as well. The feedback process is back and forth, requiring mentors to respond promptly and students to acknowledge the feedback.

“You want to make sure you give that student feedback that is not sugar-coated, but is couched in such a way that you are showing that student respect as a composer,” said Nielsen.

One of Nielsen’s former students spoke about her experience with him to another teacher.

“She said, ‘he talks to me the way I want to be talked to.’ And that's one of the nicest things anyone's ever said to me,” said Nielsen.

Students have come back to the program years later.

“We've had students who have gone on to become professional composers and some of them have come back to become mentors themselves,” said Nielsen.

In September, Music-COMP is hosting an Opus greatest hits performance in St. Albans, featuring pieces from as far back as 2000. The postponed Opus 35 concert, which was supposed to occur in spring 2020, is happening in October at the Elley-Long Music Center in Colchester. In November, the Vermont Symphony Orchestra will perform two concerts of student work. The location is yet to be determined.

All performances will be open to the public.

“Here we have elementary, middle and high school students; they get to see their work played by these amazing musicians,” said Weigand.

The program culminates for the school year in spring 2022 with an Opus concert and a show at VPR performed by the ARKA String Quartet.