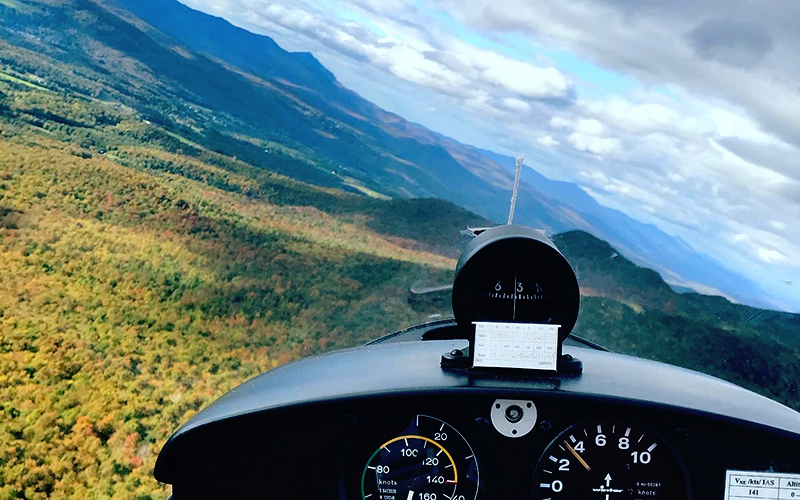 On a sunny fall afternoon, I met pilot Rick Nelson, chief flight instructor of Sugarbush Soaring, at the Warren-Sugarbush Airport to take my first-ever glider ride. Our glider was one of several parked on the grassy field by the hangar, where other pilots and private glider owners chatted and prepared to take flight. Rick showed me the controls and told me about lift, which gliders generate as they move through the air to keep them aloft. I climbed into the front seat of our aircraft, rather awkwardly cramming myself into the tight space. Rick climbed in behind me and a young pilot -- about to take his first solo flight -- lowered the dome over my head and made sure it was secure. He clipped a rope onto the front of the glider and connected it to the small propeller plane that would tow us. We rumbled down the narrow runway and then we were off. We circled the airport, pulled by the small-engine plane, which released us after a few minutes with a slight bump and suddenly, everything was silent, save for a light breeze coming through the small open window by my head.

A flapping string in the front of plane indicated the wind direction and whether the glider was sliding or skidding, much like a telltale on a boat determines how you should adjust your sails. When the string is flying straight, the plane is on an even trajectory. In fact, soaring reminded me a bit of sailing, except we were moving through air, rather than water. It had the same lightness, the joy of being propelled forward by wind.

Rick took us over Sugarbush Resort, where we could see the trails I love to ski and snowboard. We followed the ridgeline and got a little of what he called the “Sugarbush mountain wave,” when the air comes over the mountain and provides more lift. We soared roughly 4,500 feet in the air, looking down at the vibrant autumn colors in The Valley below. Rick even pointed out trees on the ridgeline that were still spindly and bare from the 1998 ice storm. We saw the verdant green patches of farms and houses and barns that looked tiny from above. It was a clear day and we could see Lake Champlain and the Green Mountains below.

Rick told me about once taking a blind woman up in a glider. When he’d asked her why she wanted to go up if she couldn’t experience the views, she told him she loved the feeling of flying. I could see why. He asked me if I wanted to fly for a bit, but I was too nervous, having immediately forgotten pretty much everything he’d told me before the flight. I was happy to let him guide me through the air with minimal turbulence. I didn’t trust myself to do something like that.

Rick told me about one pilot who’d glided from the Sugarbush airport all the way to Portsmouth, New Hampshire, several hours away. A typical Sugarbush Soaring scenic flight takes about 20 minutes and shows passengers the natural wonders of The Valley.

Sugarbush Soaring also operates youth soaring camps in the summer, where 13- to 18-year-olds camp out in the airfield and learn to fly. Their website calls the Warren-Sugarbush Airport one of the premier soaring locations in the U.S., surrounded by majestic mountains and stunning views. Rich reds and oranges dotted the woods below on this clear October day, illuminating The Valley below.

We circled back for our descent, slowly gliding over brightly-colored trees and making a smooth landing on the narrow runway. The plane barely jolted as we gradually slowed to a stop. Clearly, after roughly 1,100 flights, Rick knew what he was doing. I felt slightly disoriented as I climbed from the glider, but also giddy as I settled back onto land. For those not bothered by heights, I highly recommend a glider flight at Sugarbush Soaring, especially this time of year as The Valley is lit up with reds, oranges and yellows, truly a stunning sight from thousands of feet above.