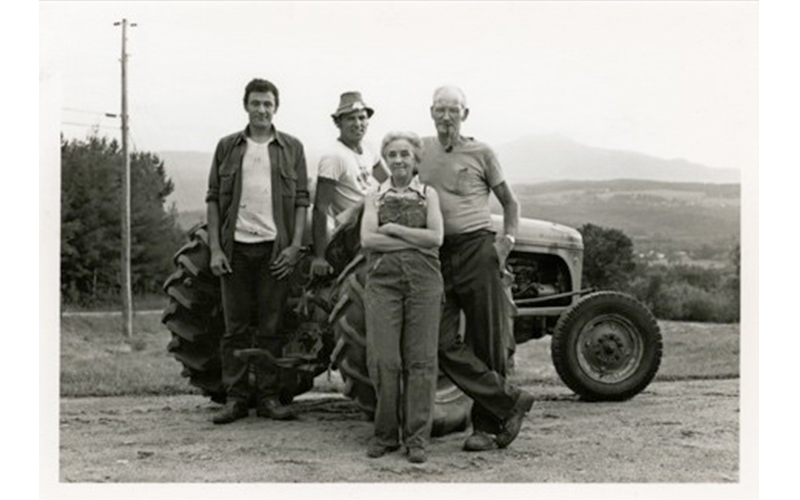 Woodard’s Farm in Waterbury Center has been worked by the same family for well over a century. An undated Free Press clipping the family loaned me reads, “George Woodard, Sr. personifies Vermont’s distinct image, which some say is disappearing.” I have referred to Professor Julie Roberts in the last three articles on Vermont Parlance. She’s made it clear, although the Vermont accent is changing, the purest speakers tend to be men who live on farms.

Sadly, George Sr. has passed away, but his son George Jr. runs the family farm now. He’s a pretty fascinating man. Besides being a full-time dairy farmer with a milking herd of 25, he’s a well-known local actor, filmmaker and musician. His award-winning 2010 full-length feature, “The Summer of Walter Hacks,” was largely filmed on the Woodard Farm.

Since he writes shows and screenplays and many of his characters are Vermonters, I wondered if he might have some dialogue written in the older vernacular.

My husband Tom went to high school with George. Maybe having the last name Mehuron would get my foot in the door? It took some getting my nerve up, but I called him. Turns out George is making a new film. In the screenplay, his characters are living in Vermont in the early 1940s. He promised as soon as he got done haying, he would call me to come up to the house and read some of the script.

He and his two dogs met me when I drove into the driveway of his farmhouse up on Loomis Hill in Waterbury Center. Neither one of us is much on small talk. He showed me to his kitchen table where we got right down to work. Once I was sure my voice memo was working, I told him we were being recorded.

A WORK IN PROGRESS

He handed me a scene from his newest film, which is a work in progress.

Kathleen: The dialogue is very clean. You don’t specify the accent. Do you remember the novelist Howard Frank Mosher of the Northeast Kingdom? He didn’t write the accent in either. But somehow you knew the characters were colloquial.

George: I don’t pay attention to the way I talk. Never given it much thought. To me it’s not about the accent. But I do try to write in a small-town U.S.A. kind of way. Like it could be happening in any small town. But you have to know how to read it. What’s funny is, one of the actors, Grace, the girl that plays Mary, she started talking like me, after listening to me for a time. When she would read these lines. Then I could hear it.

Kathleen: So, for you, it’s less about pronunciation and more the subject matter you are talking about. And the rhythm. He nodded. I have an idea. Can we pick a beginning and an ending, and have you read it aloud?

George: I can. I’ll do this one. This is mostly Mary ... Mary sits at the switchboard working. Mr. Harris is in the corner at the filing cabinet arranging papers.

Working comes out workin’. Mr. Harris is Mr. Hairis. Cabinet has that glottal stop Professor Roberts has talked about. Cabin’eh. Pretty subtle mind you. Education and travel temper any accent. George’s Vermont intonation is probably equivalent to my Jersey version. Maybe one word per sentence gives us both away.

Now kids, to understand the next part of the dialogue you are going to have to look up what a switch board is. Used to be an actual human being had to connect your phone line to the person you were calling.  The character, Mary, is such a telephone operator.

But something deeper is presented here. It’s canning season for applesauce. As if that is a universally understood time of year. It just happens to be autumn as I write this. Everywhere I walk, trees are bursting with apples. So much so, they fall to the ground. Of course. It’s applesauce-canning season for the parts of the country where apples grow wild and are easily cultivated. A regional thing that brings to mind northern country towns.

The character of Mary says, “… there’s nothing good about being in the middle of a batch of applesauce and running out of canning jars.”

My senses filled with the thought of a big steaming pot of water waiting for those jars. The heat of the kitchen. The aroma of cinnamon and nutmeg. The choice of this particular reference felt like the essence of old-time Vermont.

In the first Vermont parlance article. Professor Roberts showed us the physical pronunciation of the Vermont accent. Then Randy Graves gave us a primer of Vermont expressions. The third was a character that Rusty DeWees created, who speaks like a deeply rural Vermonter. And now George Woodard shows us how important specific references are. Place and time.

George said, “A lot of the story and the characters come from my family’s history. Thinking back to then, the characters, the costumes, the cars and trucks, cows, horses, the small villages; everything is visually more interesting to me. I remember a lot of it. My grandfather didn’t have a tractor. He used horses entirely to farm. My dad didn’t have a baler till the 1960s.

“WII historians have said that WWII was a black and white war, because most of the photos and footage were in black and white. I feel the same way about rural farm living during that time.”

George asked me, “So you want to see it?”

I was startled. “What? The film? Can I?” We spent a good long time watching the scenes he has completed on the huge monitor in his office.

He captures Vermont perfectly. The sheer decency that’s pervasive here. A value system that tells us to help out when we can. That plain talk is far more effective than sprinkling expletives into every other sentence. My children couldn’t wait to live other places. But now they say, “You might not agree with others in town, but here you know what a person stands for.” George shows this in every scene. Though we might not agree with their choices, the characters stand their ground. It’s so Vermont.

You can contact me at This email address is being protected from spambots. You need JavaScript enabled to view it. with your idea for a story.