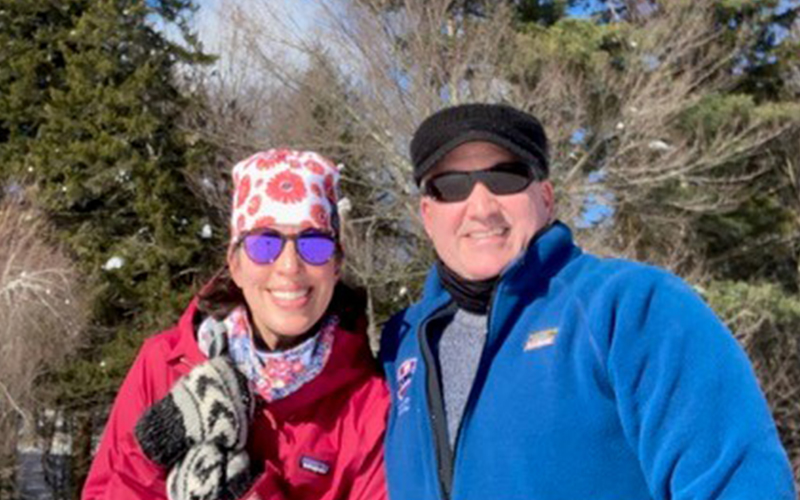 Troy Kingsbury, Waitsfield, is deeply involved in the Mad River Valley community. He grew up in Warren and has owned the Village Grocery in downtown Waitsfield since 2006, worked at the former Small Dog Electronics, where he played on the softball team, supported the launch of the Race to Read program, sponsored a local sled hockey team and built metal sculptures that can be found throughout The Valley. He credits his wife, Cheryl, for inspiring him to give back to his community. “Cheryl is the giving partner,” he said. “My wife has made me the person I am today.”

A lifelong Valley resident, Kingsbury left the area to attend Johnson State College to run cross country. He’d attended Harwood Union High School in the 1980s, where he ran for coach John Kerrigan (who is still coaching at Harwood). Kerrigan introduced him to coach Peter Kramer at Johnson, who encouraged Kingsbury to attend the school. It was there that he met Cheryl, who now teaches at Warren Elementary School. After college, the two returned to The Valley to assist Troy’s mother. His family had owned Kingsbury Service Station in Warren since 1962 and he’d worked at the store most of his life. (That store is now Jiffy Mart.)

“The last 15 years” of owning the Village Grocery (or “the VG,” as it’s known locally), “it seems like The Valley has slowed down from an overall business perspective. More people commute out of The Valley,” he said. Summer is the busiest season for the VG, which is across from Bridge Street, where kids and families convene to swim and be outdoors, and many of them come get a creemee or lunch at the store.

“We’re not a Mobil or a major branded gas station,” he said. “The people who discover us – it’s like family.” Kingsbury sometimes delivers breakfast sandwiches to regulars. The store is known for its commitment to social justice and the community. One penny per gallon of gas sold goes to local nonprofits. Customers get free coffee with their gas fill-up. The roof boasts solar panels and there’s a free EV charger. “It’s all about the little stuff,” Kingsbury said. “We are in partnership with our community. There’s more to our business than gas.” The VG is also popular for its deli and baked goods. With many of its customers blue-collar workers, Kingsbury says he tries to keep things as affordable as he can.

Last summer when a new sidewalk was put in in front of the VG, Kingsbury started a sidewalk chalk contest and provided the winner with free creemees all summer, which encouraged kids to be creative and take part in the community. “That’s the fun part,” he said.

Cheryl and Troy’s two kids, McKayla and Jakob, were born with disabilities and inspired the Kingsburys to get more involved with their community. Jakob’s love for hockey spurred Troy to support a sled hockey team and other adaptive sports. “McKayla knows everybody,” he said, “We do a lot of social things with her. It’s the whole family – we really are a team.”

Kingsbury helped get the Race to Read program off the ground, along with Logan Cook and WDEV’s Ken Squier. Kingsbury said he realized young boys were not reading many books, so he helped found the program, which brings race car drivers and their cars to local schools to get kids excited about reading and encourage them to read more books.

Kingsbury is also known for his metal sculptures, which are displayed at the store and all over town. Cheryl once found a sculpture she liked, but Troy thought he could make something similar, so he started making metal sculptures and lamps, which turned into a creative outlet for him. He has donated many of his pieces to local organizations. Bonnie and Gaelic McTigue of All Things Bright and Beautiful on Bridge Street in Waitsfield display his sculptures in their impressive gardens behind the shop. Kingsbury called making the sculptures a fun challenge. “It’s like building a puzzle,” he said.

When talking about the many creative and community endeavors his family participates in, Kingsbury said, “It’s important to do the weird things in life.”