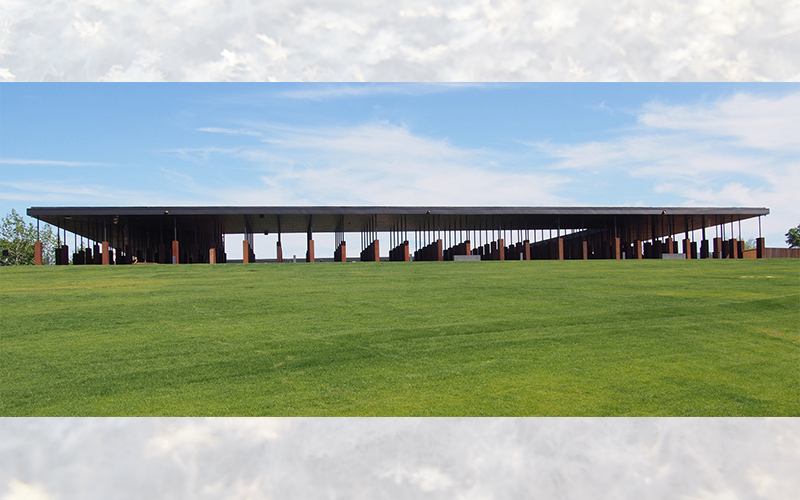 In Montgomery, Alabama, I attempted to revisit the Civil Rights Memorial and Museum, which houses the Southern Poverty Law Center (SPLC). I found it still closed since the initial COVID lockdown, so I was limited to tracing a history of the civil rights movement that is embodied in a beautiful outdoor fountain designed by Maya Lin.

However, I was able to visit Montgomery’s new multi-site National Memorial for Peace and Justice. This Memorial includes a monument, a Legacy Museum and a Legacy Pavilion.

The Legacy Museum employs holographic images to narrate the horrors of U.S. slavery down through the worst lynching periods, including the legalization of racial segregation. I was struck by the museum’s message that slavery never disappeared: It evolved into mass incarceration.

Two extraordinary memorials here honor lynching victims -- one at the Legacy Pavilion for more than 2,000 persons murdered between the close of the Civil War and 1876, and a second for more than 4,000 persons lynched between 1877 (the end of the Southern Reconstruction period) and 1950. (The National Memorial recognizes that lynching has occurred even since 1950.) This second memorial is an outdoor pavilion where some 800 steel columns of varied lengths are suspended from the ceiling, one for every county in the nation where racial terror lynching has been documented. The name and death date of each lynched person is engraved on the column of the county where their murder occurred.

Aboard the shuttle bus, I had an experience which is trivial, given the emotional weight of this memorial, but I want to include it. The shuttle driver used our transit time to point out several places where notable things had happened, mostly events from the civil rights era. However, he waved his hand at one nondescript commercial building and remarked, “That used to be the location of Montgomery’s telegraph office. It was there that Jefferson Davis sent the telegram to General (P.G.T.) Beauregard ordering him to fire on Fort Sumter.”

Kennesaw Mountain was one of the battles fought by Sherman’s army on the way to Atlanta. As such, no Vermont regiments were involved. The museum within the Visitors Center at Kennesaw has a decidedly “Lost Cause” slant to its narrative, which places it in the minority of NPS battlefield accounts.

Vermonters were not engaged at the next two battlefields I visited, either, those in Chattanooga, Tennessee and Chickamauga, Georgia. Their stories are preserved at the combined Chickamauga-Chattanooga National Military Park. One author has written of the Battle of Chattanooga as “a death grip on the Confederacy”.

Cherokee, a completely tourist-oriented town, lies at the edge of the Great Smoky Mountain National Park. It should not be confused with the Cherokee tribal lands also located here. On the latter, The Museum of the Cherokee Indian traces migrations lasting millennia that dispersed indigenous people over vast areas, across the Bering Strait, down through present-day Canada and the U.S. Among its exhibits, this museum details the forced expulsion by the U.S. government of Cherokee and other indigenous groups to federal territories in the mid-1830s, and subsequent forms of cultural and physical genocide. Too, this museum explains the decision by some Cherokee leaders to participate in the American Civil War.

Moving on quickly through North Carolina (with only one day spent in Asheville, one of my favorite Southern cities), I toured Camden, South Carolina, a very lovely town that is home to a remarkable Revolutionary War village re-creation. Cowpens National Battlefield is nearby. COVID closures mean the latter’s visitor center is open, for now, just two days a week. Outside the center there are explanatory panels and an obelisk erected by the nation’s first congress to acknowledge the British and American units that fought at Cowpens, and their leaders, by name. I wondered if there is another battlefield anywhere in the world where America’s enemy is similarly honored.

In Columbia I revisited the Confederate Relics Room in the South Carolina State Museum. I don’t believe any other former Confederate state has such a large dedicated collection.