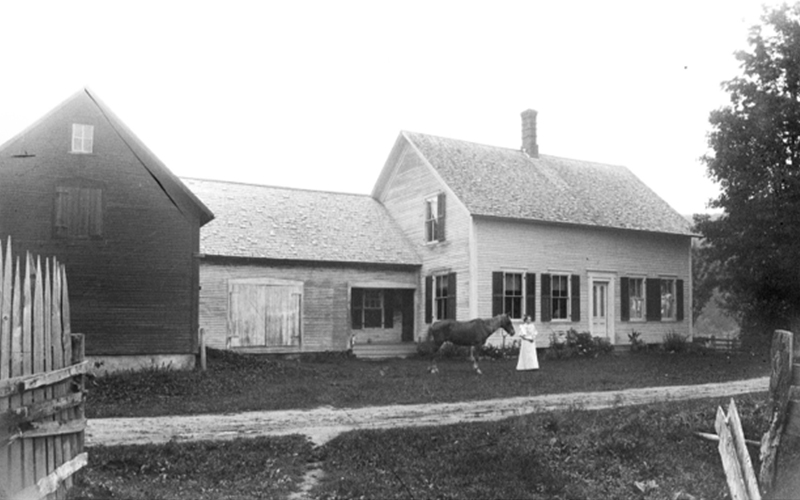 By Jim Dodds (and sent to Mary Kathleen Mehuron)

It was April 2013 when Keith Taylor contacted me about doing the design work for Sue Francis’ lovely book “Patterns of Her Life” which is based on the handwritten diary of a Waitsfield farmer’s wife in 1894. Over the next six months or so, Sue and I collaborated to produce her charming tribute to the struggles and pleasures of a woman’s life in the days just before the turn of the 20th century in the Mad River Valley.

Remarkably, it was only by coincidence that the worn diary of Adaline Palmer Stoddard ended up in the hands of Ms. Susan Francis and sent her on a fascinating search for this woman. The handwritten journal was dropped off at the historical society in Stoddard, New Hampshire, where Sue lives, with a note reading:

This little diary, dated 1894, was written by Mrs. Hiram F. Stoddard. It came to me in an auction box and I found it very interesting. I don’t know if Mrs. Stoddard came from your town or not, but I am ready to pass it on so thought of you. Hope you enjoy it.

The pages were written entirely in pencil and deciphering the old-fashioned handwriting --and Adaline’s dated way with words -- wasn’t easy. But the window it opened into life in the Mad River Valley in the 1890s was priceless. We learn what it was like to churn and mold butter each week, to “sugar off during maple sap season, to cut out a waistcoat and make lots of chicken pies and doughnuts!”

But life back then wasn’t all hard work. There were “sociables” at different homes in the long winter, oyster suppers at the Odd Fellows Lodge, horse trotting races, Decoration Day (Memorial Day) celebrations, local fairs and strawberry suppers.

“Another big occasion was the local fair, maybe for the town, county or region. Adaline wrote:

Dress, the first day of the fair

The fair must have been long because two weeks later it is mentioned again.

Adaline describes the busy schedules of her school teaching daughters, her husband’s work, and her close friendships, especially with the Poland, Kelsey and Kelty families. John Kelty drove the stagecoach that made daily round trips to Middlesex so people could get around. As she transcribed the diary, Ms. Francis was able to recreate village life in the Mad River Valley in the days long before electricity became available and when a gasoline-powered car was a sensation!

As I assembled the book, I checked the online photo collection of the Waitsfield Historical Society for any appropriate photographs. The WHS website at www.waitsfieldhistoricalsociety.com gives a wide perspective on the Mad River Valley’s history, including the full text of both Matt Bushnell Jones’ and Richard M. Bisbee’s wonderful books on Valley history. It also gives access to a collection of 800 historical photos from about 1890 to 1925. But even with all those possibilities, I wasn’t expecting I would find the image we used for the cover of Sue’s book. It is clearly a picture of Adaline or one of her daughters standing in front of their house on Route 100 at or around the turn of the century. The house, which figures prominently in Adaline’s diary entries, is now generally known as the Kingsbury house.

The house is now owned by a Massachusetts corporation and had some significant maintenance last summer. It was built by Jesse Mix in 1794, shortly after the initial settlement of Waitsfield. Hiram F. Stoddard took over the farm in 1873. Merle and Gertrude Martin lived here in the early 1900s and Gertrude Martin was a Stoddard. Otto Livingston purchased the property in 1942. It then went to Mervin and Madeline Kingsbury in 1945 and Clayton Kingsbury in the 1950s. Clayton eventually sold the property and built a log house on the east side of Route 100.

While researching the book, I was able to locate the graves of Adaline and her husband Hiram in the Mill Hill Cemetery on upper Bridge Street in Waitsfield. There are several family stones there, including a son who died at a very young age. I was also able to locate the graves of her parents on Waitsfield Common and include a picture of their two headstones, leaning into each other in the afterlife. The book, “Patterns of Her Life,” has been selling well at the Tempest Bookshop and makes a fine Christmas present for history buffs.

Take Me Back Sue Francis