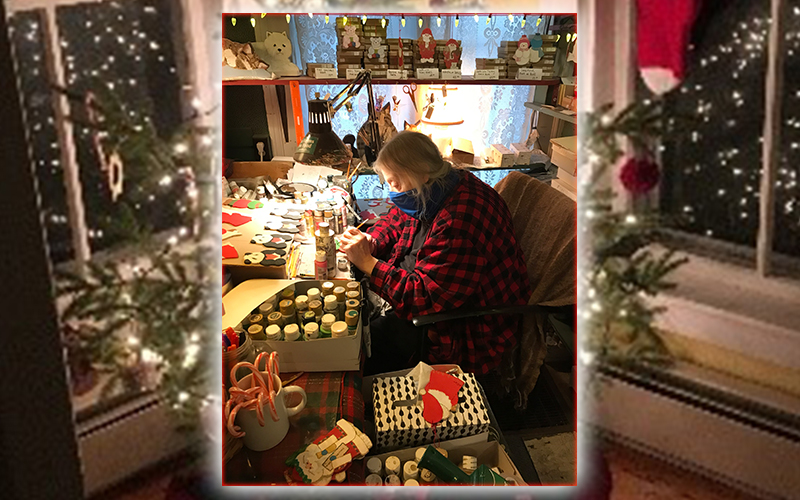 Painter Gaelic McTigue started doing craft shows in 1964, packing up her car every Friday to make her rounds. Her first job was working in the book department of Time Life right out of high school. She never studied the arts. “It’s all self-taught,” she said. “I just took the opportunity to figure out what I needed to do.”

She and her twin sister Bonnie, along with their mother, moved to Waitsfield from Chicago in 1968. “We were the three Musketeers,” Gaelic said. When asked why they chose the Mad River Valley, she said, “It’s the center of the state of Vermont. We chose the center so we had a better opportunity (than other areas of the state). Over 150,000 of us came (to Vermont) between 1960-1970.”

In 1972, the McTigues opened All Things Bright and Beautiful, which started as a handmade Christmas tree ornament shop on Bridge Street in the building that now houses Peasant. The New Year will mark the shop’s 50th year in business. “It’s been a delightful, fast 50 years on this street,” Gaelic McTigue said. They expanded the shop to 10 rooms filled with ornaments and, eventually, stuffed animals of all varieties, before moving across the street to their current location in 1983, where the twins still live above the shop. “The mission has always been European glass ornaments, things I make, handmade things, quality – that’s what people expect,” McTigue said. Her hand-painted ornaments are now displayed all over the country.

“What makes this work is the two brains,” Gaelic said. “I might look at a catalogue and I’ll see something, but then Bonnie will look at the same thing and she’ll see something else. It’s the right brain and the left brain making it happen. We’re on that same wavelength. It always drove my mom bats … You have a business with your best friend.” Gaelic called Bonnie the “outside artist,” as she maintains their impressive gardens in the back of the building, while the inside of the shop is crowded with Gaelic’s painted creatures and Santa ornaments. Bonnie still works full-time at Northland Construction, while Gaelic mans the shop. Shoppers can find her working away at ornament orders alongside her 16-year-old cat, Maude.

Bonnie and Gaelic founded the Mad River Valley Craft Fair, now in its 50th year, and were involved in the early days of the Waitsfield Farmers Market. Last year, All Things Bright and Beautiful closed up shop for three months for the first time, due to the pandemic. “It was hard to stop, after being open for so many years,” Gaelic said. She learned to appreciate the need to slow down.

When asked what has changed in 50 years, she said, “Actually nothing. Bridge Street has been amazing.” She told the story of how the street got its name; UPS needed a street name to deliver. “We were going to call it Covered Bridge Street, but it was too long to put on the labels,” she said.

Gaelic is grateful for local innkeepers, businesses and those in the tourist industry who promote the local arts and businesses like theirs. “The arts are so much a part of the village,” she said. “We’re so lucky. Just the energy from across the street, it’s just amazing. We’re as much a part of The Valley as the ski industry, just as diverse … You support the people who are dreamers. The simplicity of the life we have is to be cherished, really. It’s what makes The Valley work.”

She said the thing she loves most about The Valley is “the sense of community. Everybody watching out for each other. I’ve been through two 500-year floods, so I’m the oldest person you’ll ever talk to …” The shop was hit by Hurricane Irene in 2011 but the McTigue’s soldered on, with the help of volunteers. “The family of the Mad River Valley is supportive,” Gaelic McTigue said. “We have such a wonderful population of visitors and supporters in the state of Vermont. It makes it so easy. We have to support each other. It does work.”

“It’s an amazing place,” she added. “Everybody has a story to tell. Respect for the land, and each other – that’s part of the mission of small towns. You’re going to meet a lot of people you know” at sites such as the post office, Mehuron’s Supermarket or the dump. “Everybody knows each other, watches out for each other, checks on each other. That’s the community.”

Gaelic has served generations of art-lovers and families with her ornaments. “I would say probably the thing that is the best part of having a business as long as we have, it can be challenging, but it also is extremely rewarding to have someone come in and show me a picture of a bear they bought 30 years ago. It’s very rewarding as an artist, because a Christmas tree is sacred and to have that spot reserved for one of my ornaments on the tree, oh my word.” Generations of shoppers now own her ornaments.

McTigue said that the arts are “part of who you are. You don’t turn it off. You’re doing what you’re meant to be on the earth to do. I’ve been doing it for 57 years. I actually do like it. It’s so rewarding.” She loves the thriving arts community of The Mad River Valley, along with the places and people that make it unique. “It’s so amazing that it’s all here. The people who live here I think really love it. It is a special place. There really is no place like home.”