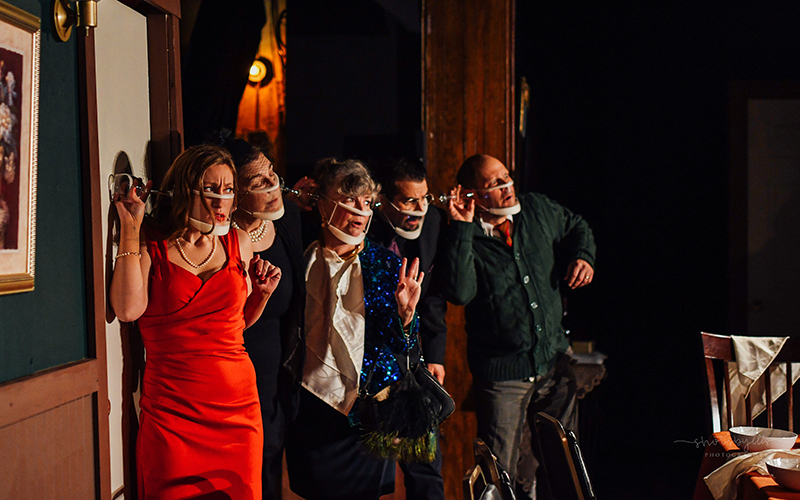 It’s a dark and stormy night outside of Washington, D.C., in 1954 and a familiar cast of characters arrives at the mansion of the mysterious Mr. Boddy. Characters given the pseudonyms Mrs. Peacock, Colonel Mustard, Professor Plum, Mrs. White, Mr. Green and Miss Scarlet – familiar names to anyone who’s played Clue the board game -- have received cryptic letters threatening to expose their shameful secrets unless they attend a dinner party unlike any of them expect. Greeted by Wadsworth the butler and Yvette the French maid, they find themselves immersed in a game of whodunit, filled with twists and misdirection, in a slapstick dark comedy. That’s the premise behind the stage production of “Clue,” which hits the Valley Players stage in Waitsfield Friday, January 28, through February 13.

“Clue: On Stage” is based on the screenplay by Jonathan Lynn of the 1985 film starring Tim Curry and Madeline Kahn, written by Sandy Rustin with additional material by Hunter Foster and Eric Price. The screenplay was based on the Paramount Pictures Motion Picture in turn based on the Hasbro board game Clue. Original music included in the play is by Michael Holland. The play is produced by special arrangement with The Araca Group, Work Light Productions and Michael Barra/Lively McCabe Entertainment.

As an ensemble cast, there’s no single “star,” but longtime Valley Players’ actor and board member Doug Bernstein shines as the bumbling, clumsy Mr. Green with his hilarious physical comedy. Carrie Phillips, a first-time Valley Players’ actor, keeps the laughs coming with Mrs. Peacock’s self-righteous banter. Clem Turmel also brings the goods with his portrayal of laughably dimwitted Colonel Mustard and Wesley Olds rounds out the cast as the wily butler Wadsworth.

“Clue” is Olds’, Barre, second on-stage show with the Valley Players, though he participated in three virtual shows during the pandemic and won the company’s Mad River Story Slam. He called theater “a fun escape from the real world.” When asked what is unique about “Clue: On Stage,” he responded, “What is not unique about this show? There’s so much wordplay in the script, every word means something.” A data analyst by day, this is his fourth time playing a butler on stage. “This was actually a dream role for me, this play. I loved the movie as a kid and, of course, the game. As soon as I read the script it was like, I need to do this role.”

Behn, Northfield (originally from Warren), is also a second-time Valley Players’ performer, having done the 2010 performance of “Alice in Wonderland” (which the Valley Players performed again earlier this year). “I just love to put on someone else’s shoes,” she said. She says playing Yvette the French maid is “very fun.” Having gone to school in Montreal, she said she’s got a “pretty good French accent.”

“Theater has always been an escape for me,” Behn said. “Theater is cathartic and especially when it is in person, it brings people together. Being back in the theater is really fun.”

This is Carrie Phillips’, Waterbury, first performance with the Valley Players. She saw the advertisement for auditions and “was thrilled because I love the 1985 movie. My husband and sister and I quote lines from it all the time.” She said Mrs. Peacock is “a lot of fun. I like that she’s kind of snarky. She has a little bit of a drinking problem. She says one thing and does another.” She calls the play “a super fun ensemble-based murder mystery. It has a lot of nostalgia for anyone who played the game or watched the movie. The cast is really strong, great set, great director.”

As Behn talked about the excitement of community theater, Seckler chimed in, “It’s also incredibly scary.” Seckler, Fayston, called her character, Mrs. White “very mysterious. I don’t like to tell my secrets. It’s a fun role.”

Director Ruth Ann Pattee has been working with the Valley Players for 25 years. By day, she works for the Northern Stage Theater Company in White River Junction. After watching a Valley Players play in the late 1990s, she decided to get involved. “It’s community, that’s what I like most about it. We have [actors] coming from all over the state. It’s really great when they can come together for eight to 10 weeks and become a family.” She directed three Valley Players Zoom shows during the pandemic. She said “Clue: On Stage” is “a really smart comedy. It’s just really fun and silly and what we need right now is a laugh.”

Pattee also did the set design. “We had the challenge of trying to build the feeling of being in all these separate rooms.” They use two-sided panels to create the feel of different spaces and created two rooms on the floor in front of the stage.

Halloran of Barre did his first show at the Valley Players in 2011 and has acted, played piano and directed music in seven or eight shows. “It creates a real nice theater community in the area. It’s so important, especially now, to have something where you can enjoy yourselves.”

Performers wear clear masks and all attendees must be masked. Theater-goers will have fun guessing whether it was Colonel Mustard in the study with the wrench, Miss Scarlet in the lounge with the candlestick or Mrs. Peacock in the billiard room with the dagger. Friday and Saturday performances are at 7 p.m. with Sunday matinees at 4 p.m.