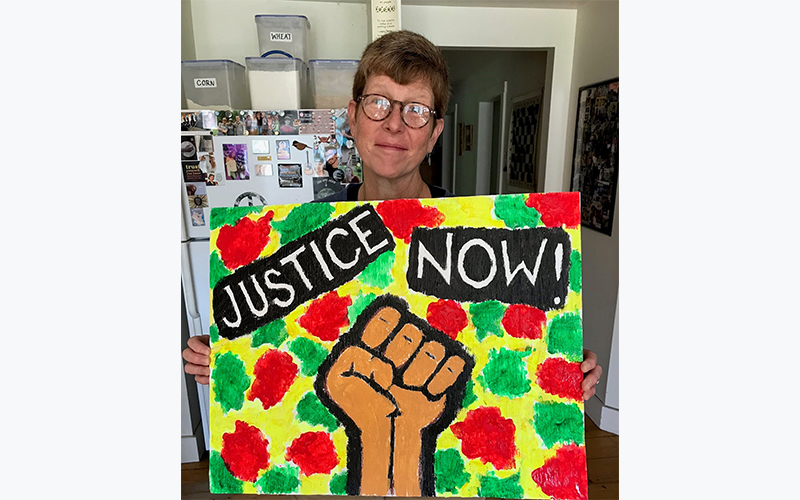 In 2019, Waitsfield native Wrenn Compere grew tired of frustratingly superficial conversations about race and set out to create a more open and educational experience for Vermonters seeking to learn more about racial inequity in society.

Certified music therapist Compere, 58, noticed during part one of a two-part series on racial justice in 2018 that the messaging was unfit for an audience with a limited knowledge of race relations.

“A lot of what they were saying was making sense to me because of the master’s program I was doing in music therapy, but I could see my neighbors shaking their heads and leaning forward trying to figure it out and they just didn’t. They weren't addressed at a level where they could find the entrance,” said Compere.

The second part of the series garnered about 30% of the original group, prompting Compere to host her own two-part discussion series. The discussions were so well received it led to the creation of the Mad River Anti Racism Initiative (MRVARI).

“I’m always looking for action items. It’s not enough to sit and talk about, we also need to do. So, for myself I thought this is a decent action item. Let's keep pulling it together,” she said.

The group meets in person monthly in the basement of the Waitsfield United Church of Christ and averages about 10 people per session. Meetings include open discussions, activities and questions about race. Although MRVARI experienced a higher turnout when it was held virtually, Compere places emphasis on the need for human connection when discussing difficult topics.

“I could get a higher attendance rate virtually, but I want us all to experience that edge of discomfort. That is sort of the heart of all meaningful adult growth,” said Compere.

UCC Reverend Mark Wilson began attending the group when he moved to Waitsfield in 2020 and takes great pride in hosting the group in the basement of the church.

He commends Compere’s efforts to maintain an ongoing conversation about race and appreciates her curiosity.

“What I love about her is that she loves to question. She regularly reaches out to people with different viewpoints,” said Wilson.

Compere recounted one of these instances where a community forum post announcing an upcoming MRVARI meeting prompted a critical response from a neighbor.

The neighbor claimed Compere’s work was unhelpful and “the very definition of racism.” Rather than striking back, she suggested a longer chat.

“I said, hey, thanks for the response. Your questions are valid and understandable. I've been grappling with these kinds of questions for some time now and would be happy to have coffee with you at your convenience to discuss it all in more depth,” said Compere.

Although the offer was rejected (twice) Compere hopes she provided her neighbor with a different perspective.

The lack of diversity within Waitsfield provides an additional challenge for maintaining open conversations about race.

According to the US Census Bureau, Waitsfield’s population is 95.8% white while the state of Vermont follows closely behind with a 94.2% white population.

As a Waitsfield native and former volunteer of 23 years for the ambulance service, Compere was aware of these demographics. The group, although open to everyone, is primarily white and a space where folks are still learning how to have these difficult conversations.

“We’re still learning that the process of making mistakes is inevitable and what counts most is getting a sense. It’s a setting where we can unpack these questions and identify our own unintentional blind spots and biases,” she said.

As for the future of Vermont, Compere feels hopeful that the state will continue to make strides towards a more equitable state.

“Do I feel hopeful about the idea of racial understanding in a state such as Vermont? I do. I believe in the power of neighborly exchange … as long as people keep talking and caring about one another and emphasizing commonalities, I’m hopeful,” she said.