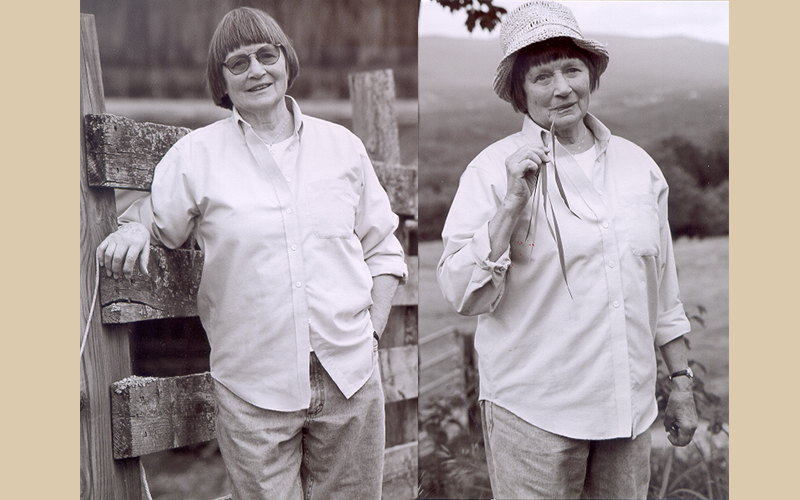 “My hair is as straight as a nail that isn’t bent.”

It was a short poem. Only 12, but it was enough to earn Valley Reporter nature columnist, author and poet Ann Day her first published work at the age of 8.

The poem was written at summer camp and was awarded with publication in the summer newsletter.

And 85 years later, she still remembers it word for word.

Day was born in Boston in 1929, delivered by the same doctor who had delivered her father.

She wrote a poem about her birth, as she does with most things.

The first of five daughters, the youngest 18 years her junior, Day had a natural instinct for leading and an intrinsic love of nature. As soon as she was able to walk, she began joining her father on his walks in the woods.

“I followed him everywhere. He loved to go and trim trees and work in the woods so I’d go along with my little hatchet,” she said with a laugh.

As she got older, Day began venturing into the woods alone and loved the solitude the pine trees in her backyard provided. She’d sometimes be joined by younger sister, Margot, who she relished in tormenting and bossing around.

“We’d do lots of stuff together. She would follow me around and I told her what to do and was really mean to her,” she laughed.

“It was probably the best part of my life,” she said with misty eyes.

She described in vivid detail the locations of her elementary school classrooms, her French lessons (an activity she was not fond of) and the stories she wrote along the way.

Day eagerly searched about her house to retrieve a seventh-grade school publication called “The Grasshopper” that featured a short story of hers, proudly holding it up to the Zoom camera as she returned.

As she thumbed through the worn pages, she recalled the names of former classmates and spoke of the inspiration for her writing.

“I wanted to write about all the things that I was doing and I liked to make up stories too.”

This story featured in the Grasshopper happened to be made up.

“These look made up; it's a religious story, so I must have been going to Sunday school or something,” she chuckled.

When she wasn’t writing or wandering in the woods, Day loved to play sports.

Field hockey was her main sport and she continued to play well after she finished high school, even after her first child was born.

Day played on a club team in Boston and traveled all around, facing teams throughout the Northeast and beyond.

“And I still have my hockey stick!” she said with a laugh.

Her hockey stick sits amongst other childhood mementos in a 30-foot-long storage unit in Waitsfield.

“I narrowed it down from three to just one but it’s the biggest one they have,” she said.

Day grew teary-eyed while talking about the keepsakes she has collected over the years.

“I hate to throw it all away before I record it or do something with it but I don’t know if I’m going to be able to do that,” she said.

Some of her favorite items to collect are The Valley Reporter newspapers that feature her writing.

She’s saved every single one.

Day moved to Waitsfield in 1954 and has been writing for The Valley Reporter since its creation in 1971.

She writes a weekly nature column called “The Nature of Things” and submits poems to be featured in the paper. Day hopes that her work will leave a lasting impression and encourage others to be more environmentally conscious.

“I’m hoping that I’m an advocate,” she said.

Day continues to write and work on various creative works, including her yearly poetry calendar.

At 93, it's clear that Day still maintains a childlike love for life and relishes any opportunity to reminisce and reflect on the past.