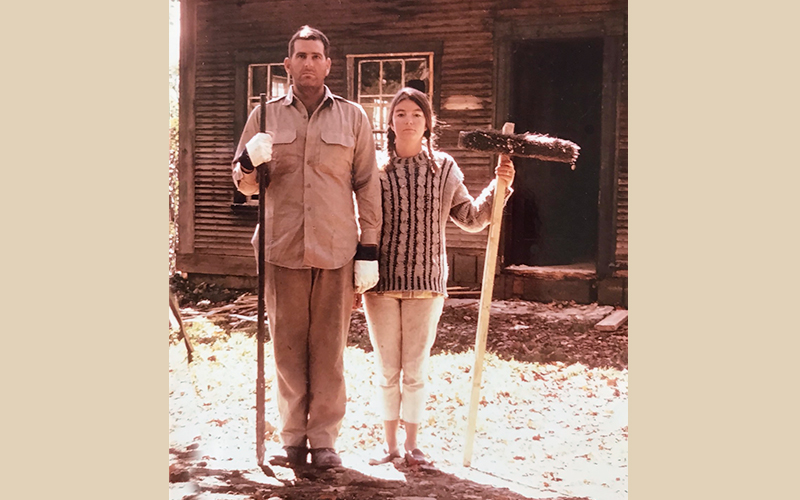 To find out more about what the Mad River Valley was like in the early 60s, I’ve been asking a lot of questions of some of my friends who are a bit older than me. Mike Ware of Waitsfield and Fayston resident Tony Egan were kind enough to put their thoughts down in writing.

Longtime Valley resident and restaurateur, Mike Ware, wrote, “Back then German Flats was not paved and the stretch from the Sugarbush Inn to Orsini’s (which was to change to be his restaurant, The Common Man), became one of the premiere quagmires in spring and from north of where the Sugar Run condos are now the road wasn’t plowed or passable.

“Bisbee’s was on Bridge Street, the Howard Bank was in the basement of the Waitsfield Library and having a charge account at Mehuron’s, Bisbee’s or one of the four gas stations in The Valley was very common.

“Hitchhiking was a very common and acceptable way to get around The Valley, and drivers would happily go out of their way to get you to where you wanted to go.”

A Waitsfield Telecom history insert had this to say, “The growth of the Mad River Valley as a major ski resort – and the arrival of a skiing priest named Father Louis Logue – led directly to the building of Our Lady of the Snows Church in Waitsfield. Logue was appointed the curate of St. Andrew Church in Waterbury in 1954 and became a regular celebrant for Sunday Mass at Saint Patrick’s. He began saying Mass at the base box at the Mad River slopes that winter, and then in about 1958 offered Mass in the cocktail lounge at the Sugarbush Inn after Sugarbush Resort opened.

“Seeing the interest and projecting the growth, Logue began a fund drive to build Our Lady, with the land given by Philip and Fleurette Lareau and a $50,000 gift from the estate of Jane Foley Martin as the two largest donations. The first mass at the chapel was offered on Christmas Eve 1963.”

A good friend of mine, a devout Catholic, was often at Sugarbush when Father Logue said Mass at the bar on Saturday late afternoons. She said, “We’d show up for Mass in our ski clothes and everything. As soon as we got the final blessing and were dismissed -- it was cocktail hour.”

Tony Egan offered, “My way of taking you back to the early 60s will be to share some random memories of my early days in The Valley. Glen Ellen certainly changed my life as it gave me the job that allowed for our move from Manhattan to North Fayston Road.

“In 1962 I changed jobs on New York's Madison Avenue and met Dona. We came to The Valley in the summer of 1963 with $5,000 from my job switch looking for a piece of land as an investment. I was a Mad River (and occasional Sugarbush) skier. I had a Renault convertible and drove the back roads with the top down and Hap (Gaylord) sitting on top of the back seat as he showed us around looking at land for sale. We passed a small old farmhouse on the southwest corner of North Fayston and Randell Road. Nailed to the tree was a circular cutout from a countertop with the numeral 4 and the word “sale” painted on it.

“We stopped out of curiosity, met Bernie and Dodie Dunbar and a few minutes later were on the way to owning a $5,000 house. I still don't believe we did it. Every weekend year-round, we drove from NYC to The Valley to work on the house and after a Sunday night misunderstanding with a very large tree on Route 22A in Orwell, we decided to choose The Valley over death. Glen Ellen to the rescue. I spent two years trying to find an appropriate job until ending up as Glen Ellen's first PR and publicity and advertising and marketing and complaint department guru.

“Prior to my successful job search, I remember going to a Glen Ellen opening celebration of some kind in, I think, 1964. The access road from German Flats Road to the actual resort was a sheet of blue ice and for some reason, Walt (Elliot, owner of Glen Ellen) chose not to sand it. There were cars and people sliding all over the place. You literally had trouble standing up and cars were easily pushable and spinnable. What a mess.

“I remember Mehuron’s on Bridge Street. They had the narrowest shopping carts on earth -- very much needed with the super narrow aisles. There was Sam the butcher who ruled the meat world before Delbert (Palmer) took over. I remember Doc Bisbee sitting around the wood-burning stove made from two 50-gallon metal barrels. Mert Kingsbury ran the state liquor store where the eye doctor is now. While checking his deli and snack inventory, I found cans of snails and knew right then and there that The Valley was not a super rural middle of nowhere area.

“Then one thing led to another and eventually Dona and I ended up with The Blue Toad (a gift and floral shop) comfortably settled in The Village Square.

“By the way, do I remember correctly that while I was line dancing at the Blue Tooth in the 90s, way back when, you were singing with the band? Keep up the good work with your Valley Reporter articles. They're great. Tony”

Thank you, Tony. And, yes, that was me. I’m a big believer if you get the chance -- always get up and sing with the band. Thanks for taking us back.

Next in the series, Tony Egan will take us back to The Valley foxhunt. Stay tuned.

If you have a story idea, please email me at This email address is being protected from spambots. You need JavaScript enabled to view it..