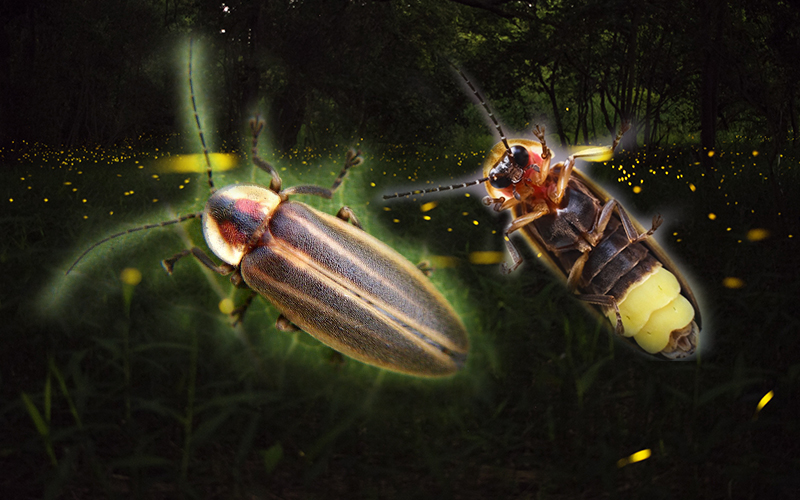 One late June evening as I stood in a meadow on Bragg Hill, I was surrounded by the sparkling light of fireflies. It was an amazing experience because of the intensity of the activity.

Fireflies are not flies at all but are soft-bodied beetles. Their other name, lightning bug, is more accurate. The wingless female lives on the ground and the larvae of the firefly both emit light and are often called glowworms, though they are not really worms, either.

About 50 species of fireflies, or lightning bugs, are known in the United States. They are best known for their ability to make controlled flashes of light which they do to attract mates.

Not all the species of fireflies can make light, but those that do are nocturnal. And they are, of course, the ones that we see the most.

The light is emitted from the last segment of the abdomen, which contains the luminescence, or light-producing tissue. Not much is known about the production of the light. The mystery for scientists is that the procedure for producing the glow would ordinarily make heat as well as light. However, in the case of fireflies, the body remains cool.

Both male and female fireflies emit light. However, the males are much more visible, as they flash their lights while flying. The females, some of which are wingless, flash their return signals from the ground.

Once a female sees a flashing male of her species flying overhead, she flashes back from the ground or a blade of grass. Through a series of signals and responses, the male moves closer and closer to the female, finally mating with her.

The male firefly then rises again to circle the field in his constant search for females of his species. The female usually doesn’t flash anymore after mating. Within two or three days she lays eggs in the soil.

Each of the 50 or so species of fireflies in the Northeast has a different signal pattern, a different time of night, a different length of time that it uses the signal, and various types of habitats. The female only responds to the male of her specific species.

As you watch fireflies, you can look for the different signal patterns. Watch for the duration of the signal, the interval between signals, the number of flashes in a complete signal, the distance the insect flies between flashes, the color of the flashes (some are green, some red, some yellow), and whether the signal is composed of one or many flashes.

Sitting in a meadow filled with sparkling fireflies can be magical. Studying the patterns is fascinating and adds a new dimension to summer evenings.

Fireflies overwinter as larvae buried in the soil. In the spring, they emerge and feed on snails, worms, slugs, and other larvae of insects. They live underground or in decaying vegetation.

In early summer they pupate in a small dirt cell, which they make. In two or three weeks the adults emerge, fly about the meadow or swamp signaling for a mate.

After mating, the female lays eggs which take four weeks to hatch. When the larvae hatch, they begin to feed on insects, snails, slugs, etc. Most fireflies are carnivorous, especially the larvae. The adults of some species do not eat at all.

In the fall, the larvae bury again into the ground to overwinter. Usually there is only one complete cycle a year.

Lying in a field on a warm calm evening under the stars to watch the mating flashes of fireflies and glow worms is an incredible experience and very humbling. When I am able to get away from street and house lights to gaze at the sky and be among nature’s creations, I am profoundly grateful.