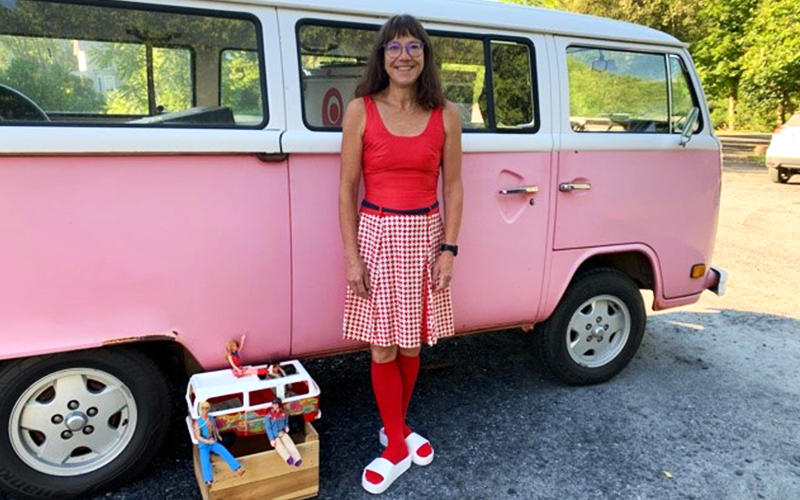 Keryn Nightingale is returning to Phantom Theater after a seven-year hiatus with a multimedia evening of performance art titled “On the Road with an Oxymoron.” It is a miniature show, where the story is told through Barbie dolls. Main characters are Growing-Up Skipper, Barbie’s controversial younger sister representing Nightingale, and Mod Ken representing her boyfriend at the time. It is 1991, and they are on a cross-country trip (Boston to Oregon with “a zigzag route home”) in a Volkswagen van when Nightingale was 22. She said, “That age is a time in life when it is difficult to perceive risks and, coming from an incredibly anxiety-ridden family, the situations that developed felt at times insurmountable.”

Much of Nightingale’s fascination with miniature worlds was formed before she was 7 when she had both visual and hearing problems that eventually were solved. An only child, she recalls spending hours playing with her Barbies with her mother’s soap operas playing on television in the background while she ironed. “You have a whole little world in your head,” Nightingale said, “Even numbers and letters had personalities.”

She learned that creating miniature worlds as a means of processing challenging situations wasn’t uncommon when she happened upon a 2010 documentary titled “Marwencol.” It follows the true story of a man struggling with PTSD after being physically assaulted who created a fictional village with toy figurines as characters to ease the trauma.

After years of writing obsessively on a novel and raising a family of three daughters, plus working a number of side jobs, Nightingale began to think that her true stories were more powerful than her fiction. She had honed her writing skills, but now was seeking a new direction. She was already known in the Mad River Valley for her one-woman shows that attracted a large following, and in 2016 had “performed” chapters of her novel in the Phantom Barn. She wondered if she should return to performing her work. The answer came the next day. She attended an impromptu Grace Potter concert in a field in Waitsfield last year. “I was standing there,” she said, “when Peggy [Potter, mother of Grace) walked up to me and said, “Hey! When are you going back on stage?” Nightingale called Tracy Martin, artistic director of Phantom Theater, the next day and said, “I’m ready to perform again.”

But what story to tell? Nightingale had told fragments of her 1991 cross-country trip to a Moth audience, and to friends. She ordered a Barbie VW bus online from Ebay, and when she opened it, she knew her story, and how she would tell it. A friend gave her a batch of Barbies, and she pulled out hers from childhood. Growing Up Skipper was perfect for portraying Nightingale. (For a certain subset of Barbie fans, the younger sister of Barbie brings hoots of laughter and even derision.) Mod Ken was given a leading role. Other characters -- Super Star, Donny Osmond, and Francie -- have been assigned mini-roles.

Phantom Theater is located at the corner of Airport and Dump Roads in Warren. Performances of “On the Road with an Oxymoron” are Tuesday, August 9, and Sunday, August 14, at 8 p.m. Go to www.phantomtheater.org to order tickets and find directions.

Mad River Glen and the natives