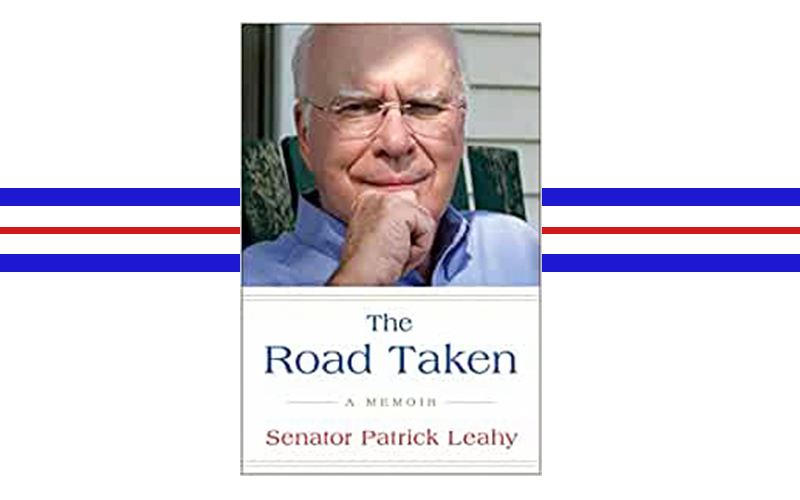 “The Road Taken,” United States Senator Patrick Leahy’s recently-released memoir is a beautifully written story about his career and about his service to Vermont for 47 years in the U.S. Senate.

Rich with stories, this book draws a comparison to Allen Drury’s 1959 novel, the Pulitzer Prize-winning “Advice and Consent.” According to one reviewer of the day, “Drury’s book marked a cultural watershed in Americans' perception of their government and the political process that propels it. It gave birth to the modern Washington novel.”

“The Road Taken” is not a novel. However, it is filled with wonderful anecdotes and well-drawn portraits of prominent public figures. His descriptions of real life in the Senate, Washington, and beyond engages the reader as much as Drury’s novel.

Arriving in Washington in 1974 with his wife, Marcelle, and three young children, the freshman senator found a respectful, collegial Senate. His book pulls no punches as it traces the Senate’s decline to the fractious dysfunctional body it is today and outlines his hopes for a better future.

Readers who have followed the news from the post-Watergate era to the present, will feel history come alive as Senator Leahy takes you behind the scenes. You sit in on candid conversations with presidents, colleagues, supreme court justices, and foreign leaders. Most poignant are his encounters with ordinary people both at home and in countries devastated by war, whose stories deeply affected his perspectives and actions.

When he traveled overseas on congressional trips, he was often with camera in hand. On one occasion in 1982, Senator Leahy took a photograph of a man in a Central American refugee camp. The image of this man’s face bought home to him his responsibility to work for the poor and powerless around the world. Called his “conscience” photo, it still hangs on his Senate office wall.

Senator Leahy grew up in Montpelier. His father ran Leahy Press, a family business then located in their home. Following high school, he was the first in his family to attend college, attending Saint Michael’s College in Colchester. This was followed by Georgetown University Law School, which led to a storied career in law and politics.

It’s been quite a journey, inspired, in part, by his friend, the late folk singer Harry Chapin, who said in reference to social issues, “When in doubt, do something.” And as a young boy, Senator Leahy was moved by Robert Frost’s “The Road Not Taken,” which ends with, “I took the one less traveled by, And that has made all the difference.” Senator Leahy’s less traveled road became his “road taken.” An amazing road, indeed.