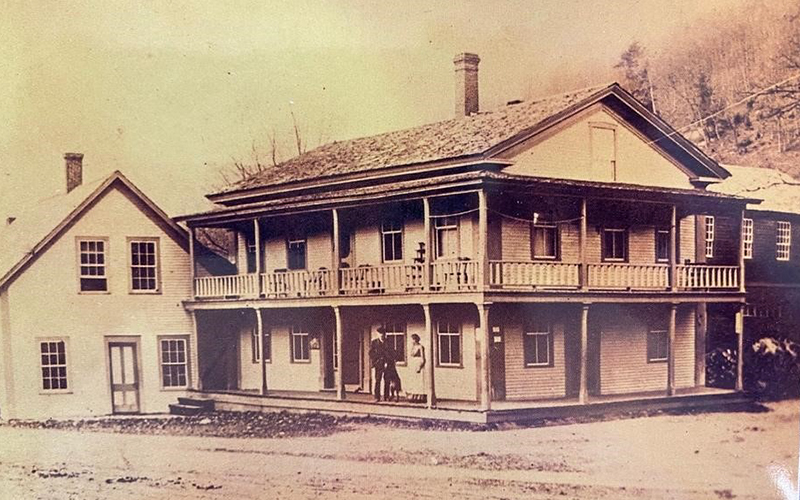 When The Warren Store was a stagecoach stop and inn, the horses would be housed behind the building in the attached barn. About 1918 Roy Long bought the business. It is said that during the Great Depression he bartered land for groceries when his neighbors couldn’t afford food. Much of the land between Warren around West Hill and Sugarbush was his. He owned the store for 52 years -- until 1970.

I went to Warren to sit with brother and sister, Jon and Pam Rickard, to learn more about the woman who purchased the store from Mr. Long -- their mother Carol Lippincott. It was she who transformed the rough country store into a place with panache.

I’d asked Pam before how their family wound up in the Mad River Valley. They all liked to ski but it seemed like a big jump to me to want to leave a big city and buy a little country store.

Jon: It was extreme. We were living outside of Boston and it wasn't necessarily buying the store, that wasn't the first thing, the first thing was moving up here.

Pam: Mom had gone to what was then called Yugoslavia, on a vacation, and she loved the lifestyle there. She said you'd work in the morning, then you'd have this like four-hour lunch and take naps. Hang out awhile and work a few more hours in the afternoon. She thought that that was an incredible lifestyle. When we were up here, she thought, ‘Oh, that's probably what we could do up here. One day we were here in the fall, I think looking for another ski house for the winter. We passed by the store and there was a for sale sign on it. Mom looked out the window and she said she would like to own that store. Thinking that she would just sit by the potbelly stove and knit. She didn’t know she’d be working her butt off.

Jon: That’s not true. She had some idea. Remember, when it became a reality that we were going to buy the store, she was like, well, “I have to learn something about running a store. “So, she went to work for the local supermarket in our suburban town.

Pam: In the butcher department. She thought she’d come up here and be butchering meat or something. I don't know where this idea came from.

Pam: There were bear carcasses in the backroom.

Jon: She really didn’t know what the business was going to be. Maybe be an inn or bed and breakfast or something. She just knew she was ready for a change. She thought it was not just a place in the middle of nowhere. She thought that we could enjoy the skiing in The Valley and there was already an incredible creative community and a crew of architects up on Prickly Mountain. People that really cared about the town. She thought it would be fun.

Pam: The first day after she bought the store, she went out to pump gas and the tank was empty. So, she called up Mobil Oil and the guy said, “I just want to tell you that to fill up your premium tank will cost this amount and regular this amount.” She said she would take $100 of regular and $50 dollars of premium. See? She was starting the store on a real shoestring.

Jon: I don’t think she had a vision; it was just a lifestyle change she was ready for. To be part of a small community. It was a struggle to clean the place up. And then to make a go of it. That winter, she borrowed some money or something and put a furnace in the basement. Drilled a well. There was no bathroom, no running water. Just an outhouse out in the back. Her vision started forming after a year or so.

Pam: I was 13 and John was 18. Mom split up with her then husband after about a year. That’s when her vision started to expand. As difficult as it was, she started to think about what she really wanted.

This guy showed up in the store very early on. His name was Paul Gurian and he drove in on this fancy motorcycle.

Jon: A Ducati, I think. He was dressed in all black leather.

Jon: He took his helmet off and everyone was swooning.

Pam: He was incredibly handsome. Mom was up on a ladder, and he looked up at her cleaning the ceiling. He asked if she sold beer. She said that beer was the mainstay of her business. And he said, “No, my dear, you are the mainstay of this business.”

He convinced her that she should have a bakery. He also, lying through his teeth, convinced her that he was a fabulous baker. He said he could make French bread and croissants. He couldn’t. He was a philosophy student at Yale. But he started the bakery. And he learned how to do it.

That was the start of the fun part of The Warren Store.

Another important time was when the Yozells thought it would be funny if Jimmy and his band played on the porch after the Fourth of July parade. He was like 13 years old! He was my age!

Jon: My mother was a magnet for young people who wanted to hang out. The store became kind of the Alice’s Restaurant of Warren. She mentored a lot of them. Gave them a place to stay when they needed one. She also helped others who wanted to start a business.

Pam: Peggy Potter had already started her bowl business before our mother spoke to her. Her comments were about pricing and the difference between wholesale and retail. I know my mother and George had a lot of business discussions as he was developing the ideas for American flatbread.

Where in The Valley can you find silks from Thailand, jewelry from Turkey, imported olive oils, and a couple of cans of ravioli all under the same roof? Ask any local, and you will probably be directed to The Warren Store. The sign in front of the store reads “Provisions,” but after 20 years in business, store owner Carol Lippincott is quick to explain that she offers more than that.

“We are a grocery, so we like to have enough stuff on hand to make a complete meal, but we offer everything from exotic to everyday kinds of things,” Lippincott states. We also carry a variety of retail clothing including clothing for men and women, children’s toys, jewelry, and housewares. I like to offer one-of-a-kind crafts from around the world, things you don’t see anywhere else.

Lippincott attributes her interest in distinctive items to her art background which she says led her to “an appreciation of the beautiful things people make everywhere.” She studied art in New York City and later took up painting, an avocation for which she has little time now.

When Lippincott moved from Boston to The Valley 20 years ago, she had no intentions of being a store owner. Initially, she came for the skiing, but she stayed because she appreciated the quality of life.  “It’s a wonderful place to live. My hat is off to those planners who have protected it. Sometimes I think the community views businesspeople as only interested in business, but I don’t think it’s a main thrust for me. I have a feeling many businesspeople came here for the same reason I did, and business is secondary.”

According to Lippincott, The Warren Store was, “One usable room in a dilapidated building” when she bought it. She immediately added a deli and a bakery, a concession owned by Warren resident, Tim Owens.

Customers, however, were hard to find. “In those early days there were almost no customers. I often left the store unattended and went out to play baseball and other games with people in town,” Lippincott recalls. “I started fixing it up one room at a time and business picked up.”

In 1973, Lippincott opened the upstairs store and gradually began offering various retail items. About 10 years ago she opened the outdoor deck.

Carol Lippincott, longtime resident Warren and owner of The Warren Store, died April 12, 2001, at home with her family after a short illness.

She owned and operated the store for 31 years. The store was a popular gathering spot for residents as well as visitors to The Valley. For many years the store has been a central part of the Warren annual Fourth of July celebration.

Carol was born in 1928 in Jamshedpur, India, and attended Moravian College.

Back to John and Pam Rickard:

Pam: Just by nature Mom was visionary and charismatic. She created a cool place. Mom had an aesthetic that was comprehensive in nature. She always sold what she liked and not what she thought she should sell.

Jon: Except for that first year. She sold a lot of Schlitz.

Pam: She found suppliers that could get her things that other people in Vermont couldn’t. She brought me with her to fancy food shows in Boston and New York. After a while she’d go to LA too.

Jon: Later, when she was more successful and could travel, she would buy things from all over the world. India, South America, China -- she’d bring an empty suitcase and buy things.