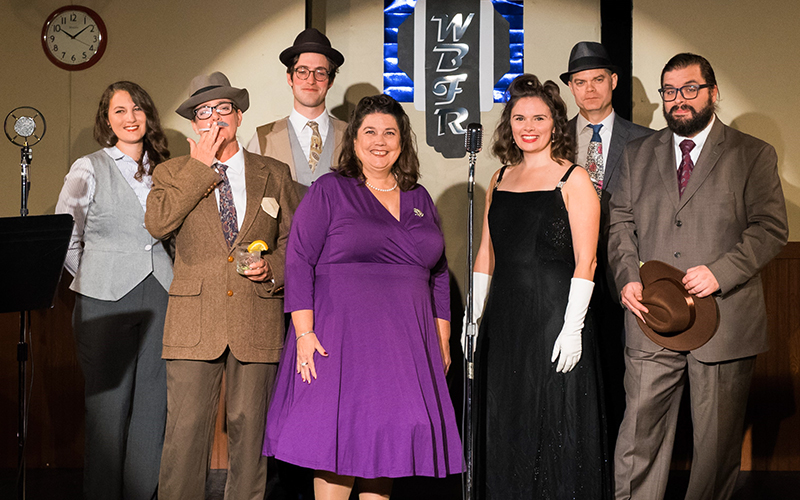 A live 1940s radio play adaptation of F. Scott Fitzgerald’s classic novel “The Great Gatsby” is coming to the Valley Players Theater in Waitsfield October 7-23. For those unfamiliar with the format, live radio plays imitate the radio plays listeners tuned into in the 1940s, complete with a foley artist making sound effects. On stage, characters portray radio actors who play multiple parts. “The Great Gatsby” depicts 1940s radio station WBFR and shows characters smoking cigarettes and sipping gin as they rotate microphones and read from a script.

Charlotte Robinson plays Nelson North, who portrays George Wilson, partygoer two, Gatsby’s butler, policeman and Ewing Klipspringer. The foley artist, Rose Foley, is played by Kohl Comtess. The play is directed by Shannon Sanborn. Ashley Hall and Susan Loynd are the stage managers and Dan Bruce is the accompanist. Cast members come from all over central Vermont, including The Valley, Worcester, North Middlesex, Barre and Montpelier. “The Great Gatsby” was adapted by Joe Landry and the score was written by Kevin Connors.

DeBouter, Berlin, said she doesn’t actually like the novel. “I did not like ‘The Great Gatsby’ at all. It’s a classic and I do think that there’s value in reading the classics. But there’s not a single likable character in ‘The Great Gatsby.’”

“Nick?” Charlotte Robinson interjects. “I don’t even know if I like Nick,” DeBouter answers. “I think he’s kind of emotionless as far as his engagement with other characters.” Asked why she wanted to be in a show adapting a book she doesn’t particularly like, she answered, “Because a live radio play is a really unique challenge. The added complexity of being an actor who’s playing an actor who’s playing multiple roles makes it really fun. You don’t have to like a story to enjoy the acting challenges that come with being in that story.”

This is DeBouter’s first show with the Valley Players, though she has been doing theater since elementary school. She has done several radio plays with Addison Radio Players, based in Addison County, though this is her first live radio play. The Addison Radio Players began during the pandemic as a way to still engage with the theater community while theaters were shuttered. “What makes [radio plays] unique is that you are playing a character who is then playing multiple roles, so it adds on a layer of complexity,” DeBouter says. “That’s also what makes it fun. You get to wink at the audience because the radio ‘audience’ doesn’t get to see what you’re doing. So, everything you’re doing with your voice is for the radio, but you want to make sure you’re putting on a show for the audience, too. So, you get to be kind of playful. We have background engagement with other actors. We can make up our own back stories.”

Director Shannon Sanborn, Barre, is the chair of the Valley Players board and has been on the board for almost 15 years. She began by doing wardrobe for “Steel Magnolias” and has acted and directed a number of shows with the Valley Players. “I love storytelling,” she said. “I listen to audiobooks in the car. There’s something about listening in that manner. When you think back, the radio show was that way, the listening to a story being brought to life.” She wanted to direct the “It’s a Wonderful Life” live radio show, which will hit the Valley Players stage in early December. When looking for the script, she came across “The Great Gatsby.”

“The Great Gatsby: Live Radio Play” opens at the Valley Players Theater on Friday, October 7, at 7 p.m. Through October 23 the play will be performed at 7 p.m. on Friday and Saturday nights and at 2 p.m. on Sundays. Tickets and more information can be found at valleyplayers.com.