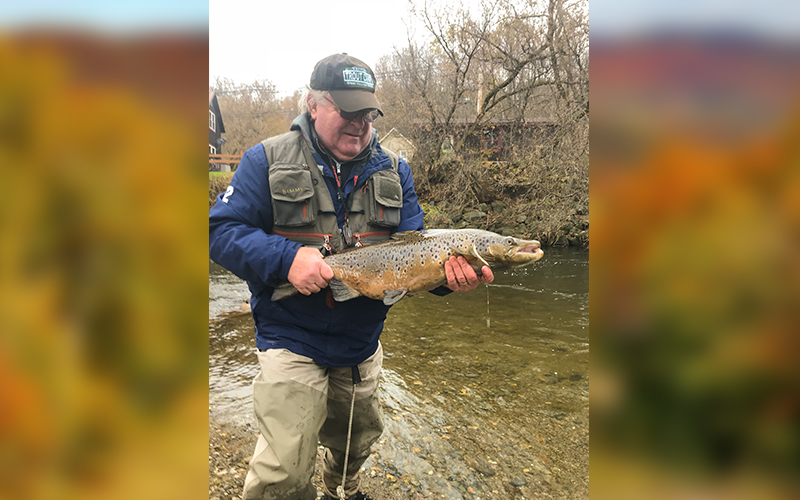 An apparent demise in salmon in the Clyde River in northern Vermont led avid fisherman and documentary filmmaker Ian Sweet, Warren, to make the documentary “The Salmon of the Clyde River.” The film premieres on Thursday, October 20, at 6:30 p.m. at Big Picture Theater in Waitsfield. The 67-minute film was made for PBS and edited, directed and produced by Sweet.

The film focuses on a 2-mile stretch of the river where most people fish and has been about 18 months in the making. It was due to be finished last November but due to COVID, Sweet was unable to cross the border to talk to Canadians, who share Lake Memphremagog with Vermont. Sweet spoke with fishermen, Vermont Fish and Wildlife biologists, the head of fisheries for Fish & Wildlife for the film, among others. He also spoke to Chris Murphy, a fly fisherman and science teacher at North Country Union High School, where he leads a ‘salmon in the classroom’ project.

Sweet began as a TV commentator for triathlons then got into production, working as a cameraman for the Olympics and for Eurosport. This is his sixth documentary for PBS. The first, “Mad Music,” focused on music at the Mad River Valley, and also premiered at the Big Picture.

Sweet, a fisherman himself, loves to fish the Clyde River and says he’s noticed a change in the river over the years. The initial idea was to find out why there was a demise in salmon in the river, but it ended up as more of a historical educational piece and finished by talking about the how factors such as climate change and drought have impacted the river. He said low flows and high summer temperatures are not conducive to salmon spawning.

“Any Vermonter should be interested” in the film, Sweet said. “[The Clyde] is one of the premiere fishing waters in the state. It would be good for kids — all ages, people who are into the environment. It is a great historical educational piece, so anyone interested in history or education” should watch the film.”