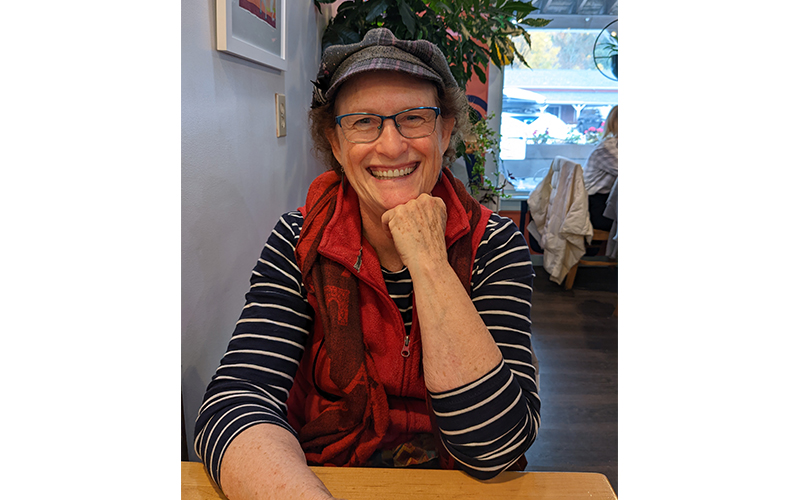 Susan Bauchner, Warren, wears many hats — thespian, poet, president of the Mad River Valley Interfaith Council, to name a few. A former French teacher and director of women’s division of The Jewish Federation in Connecticut and Philadelphia, she retired to The Valley in 2003 and became a ski instructor at Sugarbush Resort. “That’s a great way to meet people,” she said. She then got involved with the local Jewish community and has been organizing informal Jewish events for 17 years or so. She has also been president of the Mad River Valley Interfaith Council for many years.

Bauchner noted the many contributions the Interfaith Council makes to the community, including running the Mad River Valley Community Pantry year-round, organizing turkey baskets for Thanksgiving, providing emergency grants to help residents who can’t make rent or pay bills, covering costs for summer camp through the SummerFund, and organizing the ‘Joys of the Season’ program, which provides vouchers for local stores so families can buy their children holiday gifts. Along with the MRV Community Fund and the MRV Senior Center, the council is also one-third funding partner of Free Wheelin’, which provides rides for local seniors to appointments, the grocery store, and other activities. The Council also runs periodic religious services to bring together various faith communities.

“One great thing is that, during the pandemic, people were very generous donating to us. Right now, the usership is way up at the pantry and we’re able to meet the needs because we have the funding that people have given us,” Bauchner said. “At the end of the day, it’s really to hold up our community, our neighbors.”

She said people can get involved with specific Interfaith projects, such as signing up to work at the community pantry at mrvcommunitypantry.org or volunteering to drive with Free Wheelin.’ “Donating money is a huge, wonderful way to help because it gives us the resources we need,” she said. “Turkey baskets are a seasonal need and right now that’s going on.” (People can donate food at The Valley Reporter office in Waitsfield or at local churches.)

Bauchner is also involved in other community activities, such as performing in the TenFest every year at the Valley Players Theater. Bauchner once wrote a Halloween-themed play that was performed at the TenFest. “That was very exciting,” she said. She has also performed in the Moth at the Big Picture Theater and Phantom Theater and the Story Slam at the Valley Players Theater.

She writes with the weekly writing group at Joslin Memorial Library led by local author Lee Hall Delfausse and has co-led poetry workshops with Sally Reisner of Fayston. Bauchner has had poems published in The Valley Reporter as well as The MRV Pandemic Stories anthology, “A Year of Its Own.” She is a member of the Poetry Society of Vermont and has published poems in their journal, The Mountain Troubadour.

Bauchner is also a justice of the peace in Warren, which she’s been doing for over 18 years. In addition to performing marriages, justices of the peace are part of the board of civil authority, which hears tax appeals and oversees elections.

“There’s a lot to do here in this little Valley, if you want to,” Bauchner said.