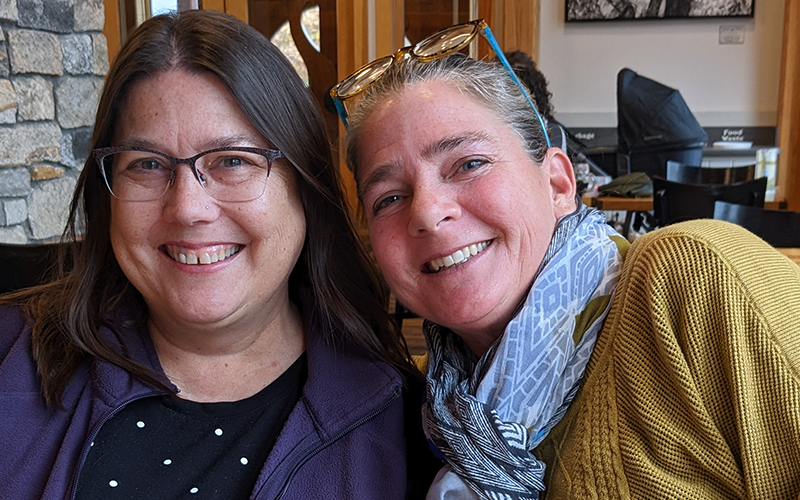 Both have children who performed in school plays in The Valley and they got involved with the Valley Players in its 40th season in 2019. Marci decided to try out for “Harvey,” “which, as a young person I watched the movie over and over with my mother. When they announced that and said, ‘If you’re scared to death, come on down, if you don’t know if you want to do this, come on down,’ I hemmed and hawed, and I did it and I’ve been there ever since.” She then went on to perform in the musical “Oliver,” “Alice’s Adventures in Wonderland,” (in which the duo played Tweedle Dee and Tweedle Dum) “Out of Sight, Out of Murder,” TenFest plays, and now “The Great Gatsby.” She was also in the Stowe Theater Guild’s production of “Our Town” this past summer, her first production outside of The Valley.

“On my way to my first audition, I had no idea what to expect, my heart was just pounding. As soon as I opened those doors and walked in, I just felt calm, and so welcomed, even being someone who didn’t know what they were doing,” Marci said.

Charlotte has also performed in “Oliver,” “Out of Sight, Out of Murder,” “Alice’s Adventures in Wonderland,” her first TenFest this year, “Clue,” and now, “The Great Gatsby.” They both also told stories in the second annual extemporaneous Mad River Valley Story Slam at The Valley Players Theater in April.

“I felt more nervous waiting for my time to go on stage than I have done when I’m going on stage for a memorized play, even though it’s my story,” Marci said. “I felt exactly the same,” Charlotte added. “The vulnerability is really scary. I love being on stage because I’ve seen the growth from “Oliver” to now — growing, learning — I love everything about it. I love the theater because it can make us laugh, cry, think, feel. I like the adrenaline — the fun, the scary, the nerves before going on.”

“I like meeting new people. I really like being on the stage and doing something fun, and the chance to be someone different from yourself,” Marci said.

FEED OFF EACH OTHER

When asked what it’s like being on stage with a family member, Marci said, “Because of our relationship, we can be on stage together and just feed off each other. In TenFest we were cast as two children who were 6 and 9.”

“We nailed it,” Charlotte quipped.

“We got a lot of compliments how the two of us, it was so natural. Knowing someone there who’s got your back and knows you, it’s been great,” Marci said.

“We’ve always had a great relationship, but I think the theater has added an aspect to it that’s just made it so much richer,” Charlotte said. “We carpool, we run lines together — just someone to bounce things off of.”

Asked what makes the Mad River Valley so special, Charlotte said, “Everything. I love this community. I love driving in and seeing the mountains. I love skiing and biking and hiking. For a small area, we’ve got a lot of things going on. We’re lucky in this Valley to have such diverse and interesting cultural things to do.”

See Marci and Charlotte Robinson perform in “The Great Gatsby” for the final weekend at The Valley Players Theater this weekend. Friday and Saturday nights at 7 p.m., Sunday matinee at 2 p.m.